“For here am I floating in my tin can…”

Three weeks of luxurious living aboard the RMS St Helena had rather spoiled our kids. When they first set eyes on the vessel which was to be their new home, Caesar peered into the empty, unbuilt interior of the fifty-footer and said, “She’s very small…”. Clearly, it was going to be difficult to find space for the moat which he had planned to construct around his cabin.
I forget what words Xoë uttered on first acquaintance with Mollymawk, but certainly, by the time the project had dragged on for a year she had formed a very negative impression. “This yacht will never be anything more than a rusting tin can,” she wrote angrily, in a letter to her father. Karma and the crazy Fates being organised as they are, it was therefore inevitable that she would one day be in the same boat.

Twirl the globe, and spin her around the sun. Eighteen summer solstices and eighteen birthdays have galloped by since Xoë uttered her famous words, and a lot of water has passed under Mollymawk‘s keel. Not that our daughter has been aboard to see all of the miles slide by, for, being of an independent spirit, she jumped ship long ago. Xoë was only seventeen when she embarked on her own, single-handed journey through life; but as luck would have it, eventually she happened to drop anchor in the same port as a very good friend of the Mollymawks.

We first met Gean Monteiro some eight years ago in Itaparica. Since then he has sailed with us on the Brazilian coast, on the River Plate, and in Tierra del Fuego. After six or eight months in Tierra del Fuego, he hopped aboard another yacht and sailed all the way north to Brittany (France); and it was shortly after this that he met Xoë.

It was clear to a dunce that these two young people were made for each other, for besides their shared liking for tequila cocktails, dreadlocks, and David Bowie, both had plans of travelling the world; and both already knew that the best way to travel is under sail. Ever since he met us, Gean had been plotting to buy his own boat, and in Xoë he found a partner who had already criss-crossed the Atlantic several times and who was known to be capable of climbing a mast and cooking dinner in a gale on the first day out. Treasures of this sort are exceedingly rare. (Indeed, I’m not capable of either of those two feats, and nor do I know any other woman who is.)

Love blossomed…. and after a time, Xoë and Gean flew to join us in Chile and were married. They then spent a romantic honeymoon helping with a major refit of Mollymawk.

Having heard so much about the glaciers and fiords in the south, Xoë hoped that after once again escaping from the family home she and her new husband would be able to visit Tierra del Fuego. However, in order to journey through this wilderness the traveller needs a boat. The odds of finding some south-going yotty who was looking for crew seemed small, but the Fates were on the case: As luck would have it, Caesar had been contracted to deliver a yacht through the Chilean Channels.

I had always said that everything would fall into place, but, certainly, I had no inkling of the extent to which this was so. I had no intimation of the way in which the forces of karma and planetary this-that-and-the-other were aligning themselves and pulling strings – for who could have guessed that while they were down there, at the bottom end of the world, the happy couple would find Their Boat?

Boaty McBoatface was moored in the creek beside the Micalvi. How it came to be there is a long story and a sad one. Essentially, the yacht was entering the Beagle Channel when she got a rope around her prop; and as a result of that she was brought to anchor in an unsuitable place, and she subsequently went ashore.
Although she spent several days bouncing about on terra firma, the boat was not holed, but she did take on a lot of water and sand during the subsequent salvage operation, and she was also dented. Very dented.
Some months later, her owner died under tragic circumstances, and his family were therefore left with a half-wrecked vessel which lay at the opposite end of the planet.

All this because of a rope around the prop. Would-be visitors to the Beagle may care to note that this is a very common occurrence, the local fishermen being accustomed to drop their crab-pots in deep water and to mark them with buoys not much bigger than a tennis ball.

Gean was particularly moved by the sight of the little red boat, because he had already come across her while she was passing through Mar del Plata, a year or so earlier. Indeed, he had spent an evening with her late skipper.
Together, Gean and Xoë rowed around the yacht, running their fingers over her damaged plates and peering in through the portholes.
Then they fled to Brazil.

To be exact, Xoë and Gean hitched to Brazil; and since it was winter, and since there is not much traffic traversing the Argentine Pampas, they had quite an adventure. While Caesar hopped on a plane and was in Valdivia within a day, it took Gean and Xoë two months to reach this same latitude. If I remember rightly, their longest time standing at the side of the big, long, empty road, awaiting a passing car, was four days; and in the interval before that car stopped, only one other vehicle had passed. Their coldest night, camped in a tent at the side of the highway, was minus ten. Little wonder that they subsequently took six months to thaw out in Gean’s homeland. 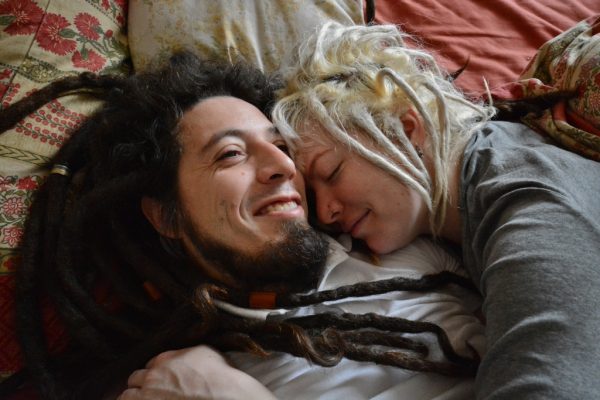 During their stay in Brazil, the newly-weds continued to search for a boat, but the image of that little red yawl stayed with them. And so they found a way to get in touch with the family of the deceased; and they made an offer.
And the offer was accepted. And Gean and Xoë now have their very own tin can!

All this goes to show that even when you are only five years old you need to be careful what you say, because those damn Fates are always watching and looking for a laugh.

The boat already having had a most unfortunate past, it was clear that renaming it could only bring good luck; and so Xoë christened her tin can, Space Oddity.
We hope that the Oddities will enjoy many happy adventures, floating around the blue planet – indeed, we hope that we might one day sail in company, if Madam X will allow it – but it is clear that before the fun can begin they have an awful lot of work to do.
The dents will have to wait, because that’s not a job that can be tackled at anchor in the snow and ice of Tierra del Fuego, and so the first task was evidently to get rid of the sand and to wash the interior with fresh water. Much to their delight, Gean and Xoe found that the furniture aboard their boat is well made and easy to disassemble. Moreover, the plating thereby revealed was shown to be in excellent condition, with no rust even on the dents. They’ve put together a little video showing part of the reassembly.

Fixing the engine Is the next priority, and since Gean is a mechanic by training this presents no obstacle. Indeed, repairs never are an obstacle to a young, enthusiastic, and skilled team; but what does threaten to rock the boat is their precarious financial state. Chilean ‘customs and excise’ laws require that Space Oddity be removed from the country within two years of her arrival – and the two years will be up in May! Yet before they can cross the Beagle Channel to Argentina, our heroes are obliged to find or afford a whole array of safety equipment, including flares, fire extinguishers, and lifejackets. (Without these they won’t be allowed to embark.) They also need money for paint. And since the previous owner inadvertently left the anchor and chain in Bahia Aguirre, those also need to be replaced.

Naturally, Dumb and Mad are doing what we can – we’ve coughed up for tools, and we’ve managed to convey a mooring line and a stern anchor via some very kind friends who were heading south from Valdivia. If anyone else would like to contribute a few quid or a fistful of dollars as a wedding gift, Xoe and Gean would be thrilled to hear from you. And visitors to Puerto Williams might like to note that there is currently a qualified mechanic available for hire.

When last we heard from them, the new boat owners were sweeping snow from the decks and trying to build some kind of heater. In the interim, we’re sure that they will keep each other warm.