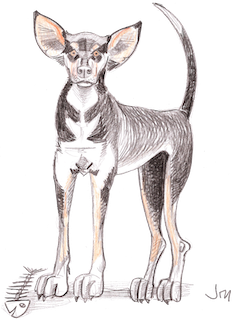 EDIT: (February 2019)
After 13 years of living aboard and travelling with us, Poppy has now left Mollymawk‘s crewlist.
For some time we had been looking for a suitable retirement home for Poppy, because we had become aware that the life on the ocean wave or on a small boat is not such a great one for a dog. It took us four years to find the perfect place, where the old girl would be well-loved and cared for and would have plenty of space, far from any road, where she could run around. (Quite a tall order, when you think about it!) Eventually we were offered the opportunity to leave her with the friend of a friend in a remote area in central Chile. She now has two other doggy companions, a five hectare garden, and MEAT! To be honest, Poppy has always loved meat more than she ever loved us… so we believe that she will be very happy here. We hope, too, that we will have the opportunity to visit her when we return to Chile.

Poppy is all Xoë’s fault. She joined us for a maximum of two weeks – after Xoë begged and badgered and pleaded to be allowed to foster a dog from a rescue centre – and she is still with us all these years later. Well, what can you do with a duo who, right from the very first day, spend their whole time gazing with adoration at each other?

We used to tell people that Poppy was a genuine, thoroughbred cross between a malamute-come-whippet-come-pharaoh hound and a collie-come-Spanish hunting dog; but we have now discovered that this is not true. Although we never saw the like of her in Spain, in Northern Morocco we met dozens of near-identical twins – so we now realise that our pooch is a Moroccan Dingo.

If we’d known that she would still be with us after all this time Poppy would not have been allowed to keep her rescue centre name but would have been rechristened Grace O’Malley, or Anne Bonny; or we might even have tried for Popeye-the-Sailor-Dog. As it is, however, she has got used to being a wilting flower and doesn’t answer to any more seaworthy name.

Poppy enjoys sleeping, eating, sleeping some more, and going for long walks in leafy country lanes…
She used to be absolutely terrified of water but suddenly and unexpectedly overcame her hydrophobia and now takes a daily dip.
(I suppose one shouldn’t mention hydrophobia so lightly in connection with dogs. Having done so I must make it clear that our Pops has been fully vaccinated against absolutely everything, is regualarly de-wormed and de-fleaed and de-gaussed, as immigration procedures require, has had a micro-chip implanted in her shoulder, and has her very own Doggy Pasport.)

Poppy is very fond of cats, having once shared the ship with a tabby called Truco.
Her pet hates are rotweilers, large labradors, and being made to sleep on deck in the dark all by herself.

Like all ships’ dogs Poppy is also known as Spare Provisions.