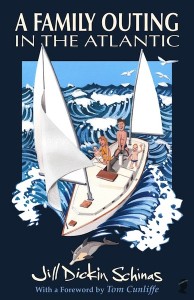 A Family Outing in the Atlantic is the story of a seven year voyage which the Schinas family made in our previous boat, Maamari.

Looking forward to the sequel.
— A non-sailor reviewing the book on Amazon

Long ago, there lived a young artist who harboured a secret passion. All her life she had sailed – sometimes in the channel which divides England from Europe, and sometimes in the miry creeks and estuaries which hide behind the Isle of Wight – but although she enjoyed pottering about in these friendly waters her eyes were always on the western horizon. From the age of 8 or 10 she had dreamt of crossing the Atlantic.

Meanwhile – drifting around, often very far from England – there lived a young fellow who was already a seasoned, ocean-going salt. Although he had grown up sailing on the same waters as the dreamer, and knew the same havens, shoals, tide-rips, and pubs, the two had never met; and the seasoned salt had long since voyaged beyond the English Channel and beyond the western rim of the world. Indeed, he had chased the horizon all around the world, eventually returning to the place where his journey began.

Having discovered the world “out there”, the young sea-salt had no wish to be sucked back into the world of nine-to-five jobs, traffic jams, mortgages, and TV brainwashing. His one desire was to keep on crossing oceans and travelling the world.

Eventually, they met…  and that was the start of the seven year long outing.

On the face of it, this book is a travelogue, but it is also a portrait of the cruising lifestyle – the hand-to-mouth, alternative lifestyle, not the early-retirement luxury cruise. Within a week of setting out on a straightforward delivery trip across the Atlantic, Jill and Nick were making plans for a journey to Cape Horn in Nick’s old cruising ketch, Maamari :

Yes, we were bound for Cape Horn… inasmuch as we had a destination, this indeed was it. But we were in no great hurry, and even this goal was viewed as little more than a staging post on our journey, for we meant to journey indefinitely. Truly, it was not a place but a lifestyle which we were setting forth to find.

One year after embarking together Jill and Nick had travelled as far as Brazil, and here they detoured up the Amazon to get married. After that they made a couple of babies, crossed the Atlantic again while the kids were still in nappies, and then turned south to take up where they left off: Cape Horn still beckoned.

Having dallied so long Jill and Nick were now eager to get on with their voyage, and so they decided to head directly for the Falkland Islands and the southern tip of South America. However, plans and reality are very different things in the cruising world. Thus it was that the little family spent the following two years in the Cape Verde Islands and on the coast of West Africa…

Eventually, seven years after setting out the Schinas family almost reached their goal. Almost, but not quite. Travelling between Argentina and the Falklands Islands they encountered a hurricane force wind which drove up magnificent but deadly seas. Just forty miles out from the islands the boat was rolled, twice.

“Here we go again! Hang on tight.” I was still at the pump and as the boat went over and down I felt myself rolling up the passage wall. My head and upper-back were on the deckhead. Once again it all happened too quickly for any kind of fear or panic. I never doubted that Maamari would bounce back up again – such a doubt never even entered my head – and when she did I landed on my knees amongst a pile of half a hundred music cassettes. Caesar was beside me – I remember hauling him to his feet – and in the same moment I shouted, “Where’s Xoë?”
Xoë was nowhere to be seen. She was not in the passage. She was not in the saloon. In an instant I saw that the main hatch had gone and realised, with a kind of numb disbelief, that Xoë must have fallen out through the gaping hole. Nick hauled himself up the companion way and looked at the debris floating all around Maamari.
“She’s not here.”
“She must be! Look again! She was wearing her lifejacket!”
“She’s not here.”
But she must be. My mind was completely blank. It absolutely refused to accept the possibility that my little girl could simply disappear as if she had never existed.
I seemed to hear a little squeak.
I must have imagined it.
We were calling her name – helplessly, stupidly – but there was no reply. We were just standing here, doing nothing, when there ought to be action – but what action?
Then we heard a little gasp. We both heard it. It came from the rubble in the bilge. How could she be in amongst that lot, which Nick had only just replaced after our previous capsize? I scrabbled at the pile of junk and found Xoë’s little face, peering up at me with an expression of horror and shock.
All those cans of paint and shackles and screws had flown out, and Xoë had somehow tumbled in before their return. In her trajectory from the passageway across the deckhead she must have missed the companion way by only inches. And had she fallen into the locker headfirst, and then been buried in the same way, we would never havefound her. Why should we have thought to look under what seemed like undisturbedstores? Imagine the awful horror of finding her hours later…!
But no, try not toimagine anything, except our survival. Get her back into the passage and hug her tight.Then set about saving the boat.
As I hurried Xoë back into the corridor, I happened to notice the main mast lying on the deck outside the port holes. “Did you know we’d lost the main mast?”
“Yes.”
This time there was no surprise or chagrin. Compared to the loss of our hatches,the loss of the rig was of no consequence. Now we knew that we were fighting for our lives. With all these hatches gone another knock-down would surely sink us.

The Schinas family’s adventures range from fighting gales and battling with immigration officials, to exploring uncharted African waters, searching for hippopotami, rescuing a child-overboard,  almost losing the mast through the keel, and abandoning ship to board a chopper. During their voyage they visited 38 different countries, archipelagos, and island nations, made friends with lots of wonderful people wearing everything from Brazilian naval officer’s stripes to grass-skirts, and sailed more miles than they can be bothered to count.

There is much in A Family Outing in the Atlantic which will be of value to other yachtsmen and other travellers, and heaps which will appeal to armchair voyagers and to families seeking to turn away from the nine-to-five motorway and tread a road of their own. The book also contains quite a bit of practical information about sailing in West Africa, and since the Schinas family were amongst the first yotties to cruise south of Guinea Bissau this could be said to be seminal. (In Ghana, where the family was the centre of much attention, they were told that theirs was only the second yacht ever to visit the country.)

Tom Cunliffe had this to say about a Family Outing in the Atlantic:

The Schinas family are talented people. There’s nothing on the planet that Nick can’t fix, while Jill is an artist of character. The children are developing in the same mould, but the overriding feature of all their lives and the guiding spirit of this book, is their self-sufficiency and courage to make their own choices, come fair weather or foul.
Casting fate to the ocean winds without visible means of support in the third millennium demands a lot more guts than ever it did thirty years ago. Keeping going, despite producing three fine children and surviving a capsize off the Falklands that ended on the winch cable of an RAF helicopter, shows the true spirit of seafaring.

This book should provide inspiration to anyone that seeks out a cruising lifestyle founded upon acceptance [of the fact] that life is about the journey and not the destination. …
The author writes in an easy to read style that conveys a real sense of the reader accompanying Maamari as part of her `virtual’ crew as she sails … You are taken on the journey and grow to understand and participate in the highs and lows, fears and uncertainties, frustrations and celebrations of both cruising and everyday life, which are articulated with clarity, description and feeling. `Human-ness’ permeates this wonderful story from beginning to end.
Several paragraphs stand out like shining beacons that show a little glimpse of the real depth of lifestyle that this family pursue … where life’s natural wonders are appreciated, from sunsets to storms, from people to cultures, and where real wealth is created and harvested in one’s soul. …
I marvel at their endeavours and their success as a family which radiates from this manuscript. … When things do go wrong they are met squarely with determination and perseverance, two factors that feature throughout their story from beginning to end.
A great read for sailors, non-sailors and for `armchair’ sailors alike. … Reading of this book provides an experience to the reader far above any financial measure.

— The skipper of the yacht Windsong, reviewing the book on Amazon.co.uk

Following Maamari‘s crew on their voyages from the snug comfort of my sitting room and bravely resisting the temptation to peek into the last chapter, I had the permanent feeling of wishing that I could have been there with them. … But a word of warning: once you’re there, you won’t be able to put the book down till you reach the end. Looking forward to the sequel.

— Patrick Orre – a landlubber – reviewing the book on Amazon.co.uk

For more information see Jill’s website or the publisher’s website, or read the rave reviews on Amazon (all written by people we have never met).

If you buy the book via us, we’ll earn more money – but you’ll have to be a little patient if we’re at sea.
Alternatively, you can follow these links to Amazon UK or Amazon US.