Mollymawk started her life on the Cape Flats, in part of the insalubrious sprawl which has spilled over from Cape Town. Her hull and deck were put together by a Belgian welder, bought by a Kiwi entrepreneur, and then abandoned by him just a few months later when he decided to move to England. That’s when we entered onto the scene.

The Dim and Distant Past 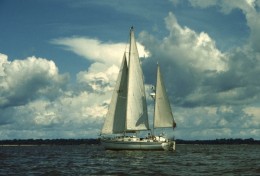 We had just spent the previous seven years bumming about in our ancient GRP ketch, Maamari. Led by impulse, and carried along on the currents and winds, we had travelled from England down the Atlantic coast of Iberia, out to the Canary Islands, and thence to the Cape Verde archipelago. From there our noses had led us first to the African mainland and then across the pond to Amazonia. The Caribbean was the next item on the itinerary, and it was there that the older two kids were born. 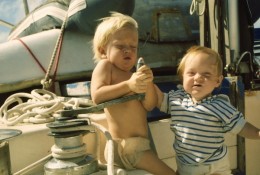 When we tired of the Caribbean playground the currents and winds ferried us back across to Europe. Then down we went again, via the Canaries, to the Cape Verdes. This time we spent a year leap-frogging around those dusty islands, exploring each one in detail – and afterwards we spent the best part of another year cruising in West Africa. Our curiosity took us from Senegal to The Gambia, from there to Guinea Bissau, from Bissau to Conakry, and from Conakry on around the bulge to the Ivory Coast and Ghana. From Ghana we sailed to the magical mystery islands of Saõ Tomé and Principe, and from there we made a seven week long crossing to Uruguay. From Uruguay we then continued south, travelling down the coast of Argentina.

So far, so good – we’d had plenty of hassles with some of the natives, and a fair few problems with some of our gear. We’d even had a few gales – but we’d had nothing to compare with what we were about to be given. By now, as the geographers amongst you will have realised, we had crossed right through the tropical belt and were back in the so-called Temperate region – a region where, as everybody knows, the weather is generally anything but temperate. But we were not even planning to stop at that. No, we were now bound for Tierra del Fuego and the southern tip of South America. We knew it would be tough, but we thought that our boat was up to it.

One sunny January morn we set sail from Peninsula Valdez, bound for the Falkland Islands. A couple of days later the sun disappeared and the wind rose. It continued to rise until it reached 75 knots, and a day later – on January 10th 1996, to be exact – our boat was capsized by a freak wave. An hour later we went over again. During this misadventure the boat was stripped of both her masts and most of her hatches, leaving her stranded and open to the sea. Our travellers’ tale and the full story of our shipwreck is told in A Family Outing in the Atlantic. So far as this article is concerned, all that need be said is that after this experience we decided that we needed a stronger boat. We needed a steel boat. 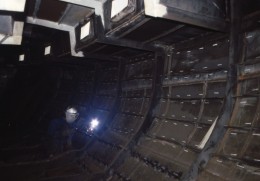 We started building Mollymawk in 1998. At the time we thought that we would just fit the boat out and go; we reckoned on spending no more than 18 months ashore in South Africa. As it turned out, there is quite a bit more to building a steel boat than just fitting furniture inside the hull – and, in any event, we first had to rebuild the boat. Having discovered that the pretty-looking welds on which our lives would depend were actually hardly capable of holding the boat together on her cradle, we had no option but to grind them out and begin all over again. There followed many months of welding and then, eventually, a fortnight of sand-blasting and weeks and weeks of painting. This is to say nothing of the time which was spent building the water-tanks, installing the engine, manufacturing the masts and the chain-plates, and making the rudder and the rest of the steering system. 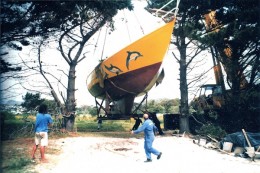 Mollymawk was launched in 2000. Thus far she was little more than a shapely and colourful tin can – there was nothing inside her except the tanks and the engine – but we moved aboard her that same night. And we’ve been living aboard ever since. A year after the launch, with the masts now rigged and the windows and hatches fitted, we left Cape Town. We still hadn’t done what we came to do – we still hadn’t fitted out the boat – but we were by now heartily sick of being tied to the shore. Over the course of the next two and half years we cruised, in our usual erratic style, from South Africa to Spain.

It used to be that every time we stopped, the admiral would say, “Right. That’s it! I’ve had enough! We’re not leaving here until the boat’s done.”
But nothing much ever happened. Time hurtled by and we rushed around, working and playing hard, and there never seemed to be time to get down to the business of finishing the boat. Then, before too long, the old urge would kick in again: “I must go down to the sea again… I really must, even though the galley and the aft cabin are still not built; even though the Designated Navigation Area is still buried under cardboard boxes full of paint and clothes and books; even though the deckhead is still not lined… There’s a whole world of water waiting for us out there…”

Eventually we washed up in Brazil, and although we’d only planned on staying for a couple of weeks we ended up spending – oh, what was it now? I think it was four years – jogging up and down the coast between the corner of Brazil and the River Plate. And eventually, somehow or other, while we were there, we managed to get the boat into a state where she was ready to go where we set out to go all those years earlier when the youngest of the crew wasn’t even born. Ready to go South.
Along the way, we produced another book which seeks to spread the word about How NOT to Build a Boat…

If you want to know how we fared in Tierra del Fuego and in the waters off Cape Horn you can follow the links.