Several times over the course of the past year I’ve made reference to the Micalvi, and if you’ve been paying attention, O’ Best Beloved, you will have gathered that it’s the name of the place where we moor in Puerto Williams. 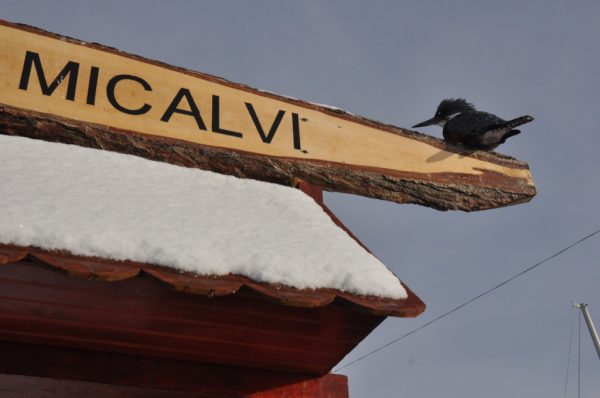 You could be forgiven for thinking that Micalvi is just another of the irrelevant appellations which have been attached to this region. The Straits of Magellan, Monte Sarmiento, Adventure Bay, the Beagle Channel… these places were named for the men and ships which visited and explored this region, and thus the words belong on the maps; but Ponsonby Sound…? Isla Herschel? Wollaston? Navarino…? These and a great many other local names were dumped upon the cultural landscape by ships’ captains seeking to curry favour with financial backers or with men of repute.
Is Micalvi another one of these? 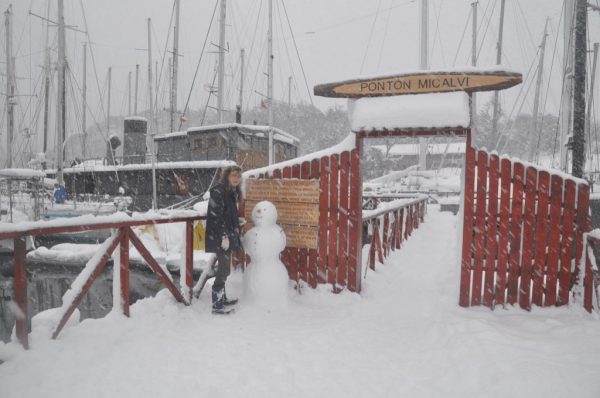 No. Micalvi is not one of those names which were brought to the region by Fitz-Roy and his kin, and nor is it it the transliteration of a native name. Ushuaia, Wulaia, Lewaia, and all the other ‘why-as’ are Yaghan place names. But Micalvi is a Greek name.
Truly, this is a multi-cultural region, and Chile has a colourfully cosmopolitan past – the man who led the country to independence from Spain was called Bernardo O’Higgins – but how did the mooring place in the world’s most southerly town come to be named for a Greek?
Well, it happened thus: Micalvi is not actually the name of a place, it’s the name of a ship. And the ship itself is now the mooring place for the yachts which visit Puerto Williams. 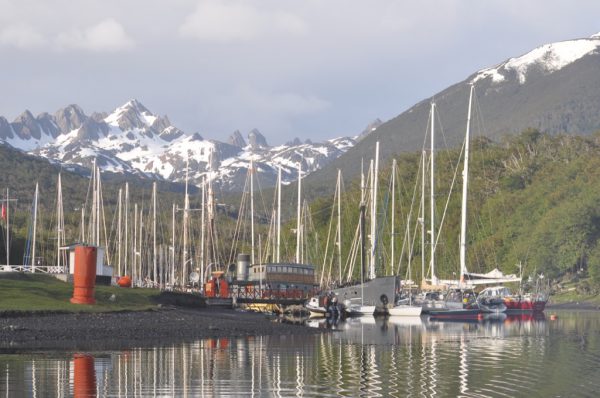 The Micalvi was built in Germany in 1925 – and she was originally called Bragi.
She was, in fact, not much of a ship by today’s standards. She was just 181ft long (55m), which is less than a great many mega-yachts and a lot less than an ocean-going fishing boat.
She drew 11ft (less than 3.5m), and her registered tonnage was 850 – which means that, in theory at least, she could carry that weight of cargo in her hold.
She was apparently built to carry cargo on the Baltic, but within a year she had been sold and was being used, instead, to ferry goods up and down the Rhine.

The Bragi‘s hull was built of iron plates riveted together. She had a high plumb bow with a fine entry. Her accommodation was quite tall. Her stern was rounded and fairly low, rather like a tug’s.
Configured thus, she was well-suited to slicing through the still waters of a river or a relatively calm sea but was not the ideal choice for a vessel which must ride the ocean’s waves – and yet that is where fate took her next.

In 1928 the Bragi was laden with a cargo of ammunition which had been purchased by the Chilean government, and she was sent south. So far as I am aware, there exists no account of this journey. One has no way of knowing whether the crew who brought her on this expedition of almost 8000 miles had made the same trip on previous occasions, and nor is there any record of how often the vessel had to put into port. At this time many ocean-going ships were still driven by the wind, and if they embarked from Europe for Chile, or even for India or Australia, then that is where they went – but the Micalvi was dependent on coal.

Truth to tell, the Micalvi looks not so much like an ocean-going cargo boat as like one of the antique steam tugs which used to operate in the Cape Verdean port of Mindelo. Even as recently as the 1990s these two old ladies were still in operation there, and one could watch them dragging scarves of brown smoke across the sky – ahead of a backdrop of high-tech wind generators. What a bizarre contrast!

I imagine that the Micalvi must have presented much the same appearance as these smoke-blackened tugs; and moreover, I would be surprised if she and they did not actually came face to face – or hull to hull. Mindelo lies slap bang on the route between Europe and South America, and that is why the town was established – specifically as a coaling station.

On then, across the broad Atlantic – and with just that one 380hp steam engine hammering away ceaselessly. Ten years later, during World War II, vessels taking part in the escorted cargo convoys from Britain down to West Africa were required to keep up a minimum speed of five knots, but many couldn’t manage it. One wonders how the Micalvi would have fared. The ship’s top speed was apparently 9½ knots, but with the cargo and a full load of coal weighing her down she probably cruised at no more than five.
Oh, how the world has changed in the century since! Nowadays we often see cargo ships travelling at 15 knots, and even Mollymawk can punch along at six or seven knots under engine.

The Micalvi – or the Bragi, as she then was – did have a couple of masts, but they were low, and nor is her hull shape suited to sailing, so that any canvas which she set will have been a mere auxiliary to the engine. With that machine thudding away, combusting the coal, and with the hold largely occupied by the weight of the ammunition, she will surely have had to dive for the first port of call which offered on the far side of the Atlantic – so I think we can assume that from Mindelo she went straight to Recife. After that, she probably chugged down the coast to the River Plate where she will have refuelled again either in Buenos Aires or in Montevideo.
And then came the long and dangerous haul south down the uninhabited and rugged coast of Argentina.

In those days there were no long range forecasts, still less satellite phones; so the captain probably hugged the coast, the better to hide from any south-easterly gales – and, so far as we know, the Micalvi‘s passage was uneventful.

On arrival in Tierra del Fuego, the German crew disembarked their cargo of ammunition into the Chilean warship Almirante Latore. And then, according to the legend, the Chileans said, “What do you want to do with her now?”; and the Bragi‘s captain said, “She’s non-returnable.”

And that is how the ship came to be abandoned here, at the uttermost end of the world.

As to how the Bragi came to be renamed the Micalvi, I have no idea, except to say that it is a Greek name and is apparently an abbreviation of Contramaestre Mivalvi. Contramaestre is a Spanish word which is generally translated as bosun but which actually means something more like lieutenant. So, the little ship was evidently named in honour of a Chilean sailor who had done something noteworthy. Perhaps he was a hero in Chile’s great ‘War of the Pacific’.

Useful little boats being a bit hard to come by in this isolated extreme of the Americas, the Micalvi was soon put to good use. She spent the following 30 years as a supply ship carrying food, fuel, and passengers between Punta Arenas and the farmsteads, Yaghan villages, mission stations, and naval bases of the remote territory to the south. The cruising guide for Tierra del Fuego shows her anchored off Puerto Navarino, but I am sure that she also visited the more inaccessible stations at Picton, Nueva, and Lennox. Myself, I wouldn’t have wanted to take her down to the Wollastons and to Cape Horn – but she may even have gone there, too. 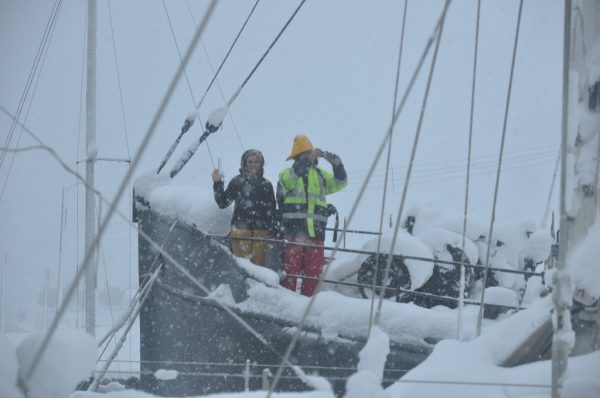 In 1958 the Micalvi was sent to carry men and materials for the construction of a lighthouse on Islote Snipe, an event which was to lead to hostilities between Chile and Argentina (the two countries both claimed the islet and spent the next few months knocking each other’s lighthouses down) and which almost culminated in war.

The Micalvi, having been brought to Tierra del Fuego almost by chance, had proved to be invaluable; but 32 years after her arrival, in 1961, her career was brought to an abrupt end. One night in bad weather she ran onto a rock in the Magellan Straits. Although the accident occurred some 300 miles from Puerto Williams, the navy somehow contrived to tow the boat through the channels and round to their most southerly base. Perhaps they thought it would be the most appropriate last resting place, but more probably someone thought that it might be possible to fix her up.

In the event, some time after this the Micalvi was placed in the creek immediately to the west of the village with the idea that she would serve as a pontoon. She was scuttled in the shallow water here; and here she remains – a symbol of the sovereignty of Chile in Patagonia (according to the noticeboard) and an invaluable asset to visiting yachtsmen. 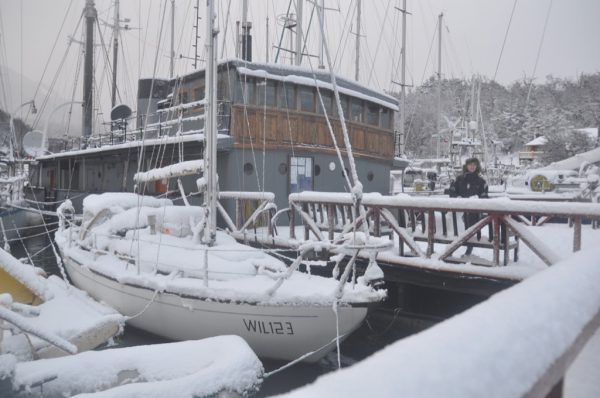 The chap who came up with the idea probably anticipated seeing a couple of naval pinnaces alongside the old steamer, and I’m sure he didn’t envision 25 foreign yachts stacked on either side.

In 1976 the Micalvi was declared a national monument. It’s also the most southerly yacht club in the world.
In former times it boasted the world’s most southerly bar, but the current administrator of the naval base is something of a prohibitionist, or so it would seem, and the bar is currently closed. Still, in the summer this place is a focal point for visiting yotties, and many a pleasant evening have we passed on the old bridge, sharing food and wine with fellow travellers of assorted nationality.

As the photos show, the Micalvi also provides a home to a variety of wildlife. Besides the birds and the seal, we’ve seen beavers swimming around the hull, and there’s rumoured to be a mink living in the old engine room.

Or at least, some people say that the sounds are of a mink running around. Others say that its the old German captain who haunts the half-sunken lower deck of his one-time command.