After just over 13 months in the Chilean Channels, Mollymawk has finally arrived in Valdivia.

The journey from Puerto Williams north to the city of Valdivia is one that can be done in a week, and very few people spend more than three months – but we like to take a close look at the places we visit.
In the course of this year and a bit we’ve still barely scratched the surface of this unimaginably vast, largely untouched wilderness of Tierra del Fuego and Patagonia, and there are lots of places that we hope to return to someday. But not until we’ve warmed up… And not until we’ve done a lot of work to the boat.
It’s been eight years since we last slipped Molly, so our priority now is to find a yard with a big travel-lift.

Over the course of the next few weeks we will continue to post articles about our journey, and we will also share our thoughts and ideas regarding ‘high latitudes’ sailing. If there’s anything you particularly want to know about cold weather cruising or about this region in particular, feel free to drop us a line and ask.

In the meantime, we offer you a few ‘snaps’, taken during the past few weeks.

If I had to summarise the whole experience I’d say that the ‘souther’ you go, in Chile, the better it gets, but even when you’re within a stone’s throw of civilisation there’s some amazing scenery.
Here, Mollymawk is anchored on the Carretera Austral, which is one of Chile’s principal highways. 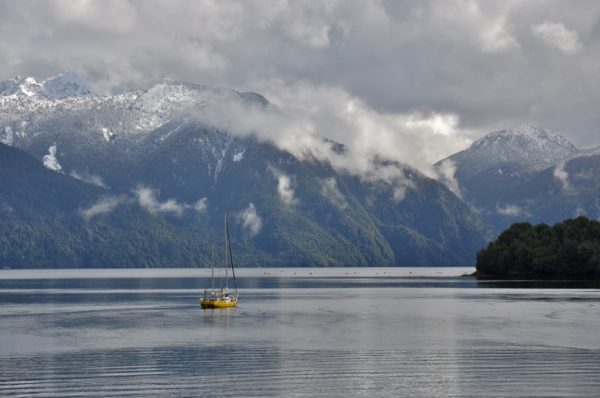 Every hour or so a ferry goes by, carrying cars and lorries and buses from the city of Puerto Montt to the head of the fiord; and at the head of the fiord the traffic all piles out onto a dirt track. The track is the only road south through Patagonia. It goes as far as two tiny villages called Tortel and Bernado O’Higgins. Anybody who wants to go any further than that has to get aboard another ferry, for a much longer ride; and indeed, you can’t even get as far as Tortel and O’Higgins without needing to make ferry crossings. The ferries stitch the various bits of the road together.
Personally, I think this is a great system – I think it makes the country very special – but the economists don’t agree, and the government is in the process of filling in the gaps. The South is finally to be opened up. 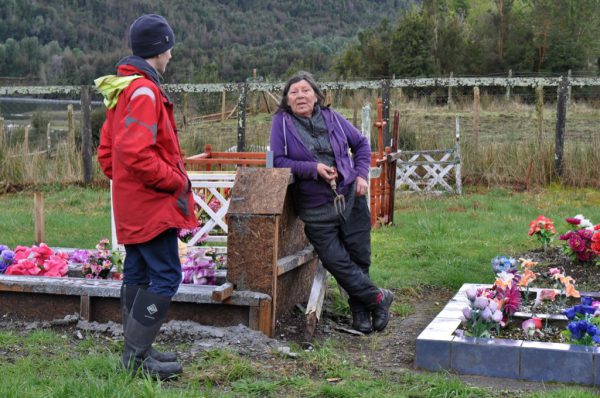 This lady lives at the side of this same beautiful fiord. Adelina is 72, and she has lived all her life in a tiny village called Huinay; in fact the villagers of Huinay are almost all descended from her grandparents, who came here in 1914.

Adelina reckons the coming of the road is great news, and so do here brothers. “It will modernise us,” they said.

Don’t it always make you feel that you don’t know what you’ve got till it’s gone?
But even after the road is built, the greater part of Patagonia will still be wild and inaccessible – except to yotties. We were surprised at how few of our kin we met during our travels. This Swiss boat was the first that we’d seen in three months and 350 miles. 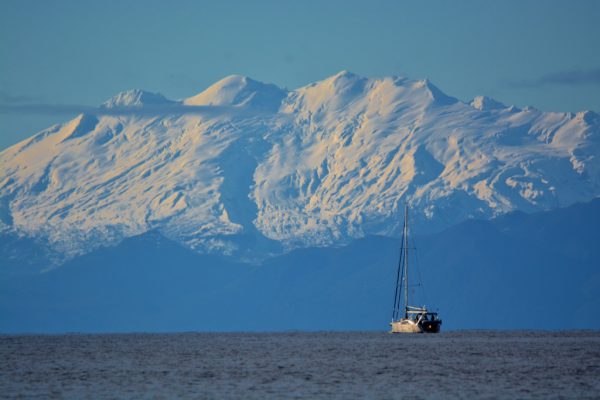 We also caught up with some French friends. Isabelle and Ariel are kindred spirits, sharing our opinion of Trump and our passion for otters, and being highly skilled in the art of getting by on a shoe-string whilst doing as little harm as possible to the environment. Whilst in Chiloe they had their dinghy stolen. Which reminds me
TWO OF OUR FRIENDS HAVE HAD THEIR DINGHIES STOLEN FROM THEIR YACHTS WHILE VISITING PAILDAD, CHILOE,
so you might want to give the place a miss…

These buoys litter the beaches of the Chonos archipelago (the maze of islands between the Golfo de Penas and the big island of Chiloe) so there’s never going to be any difficulty finding one. However, the result was a very heavy dinghy. Isabelle and Ariel wanted something that they could lift aboard and fold – so they knocked up a design, made a 10th-size model to test its viability, and then ordered sheets of polypropylene from Santiago. 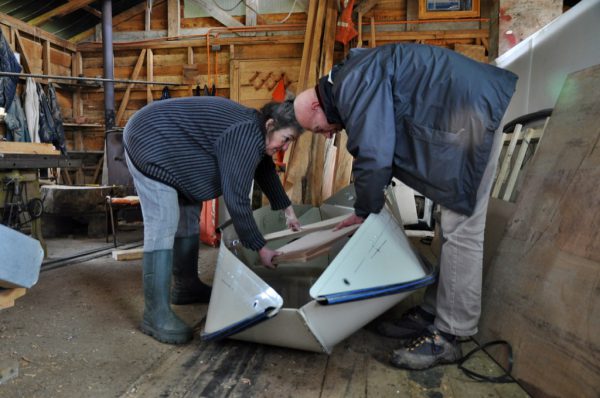 Of course it probably helps if your old man was a naval architect – and Isabelle’s father designed Jeanneaus’ Gin Fizz – but it seemed to me that the key ingredient in this dinghy building project were self reliance and clear thinking. Cruising yotties are famed for their independent spirit and ability to get by, but Isabelle possesses self-reliance in fabulous abundance. We gather that Origami was found, on her launch, to be too flexible, but I have absolutely no doubt that her designer will have fixed that problem by now.
As for clear-thinking: during the three weeks of the building project, Isabelle was fasting – she consumed nothing but strained fruit-juice and water – and yet when she took us to see her baby, she still managed to stride up the hill to the workshop ahead of the rest of us. She reckons that her thinking was much sharper during this self-imposed period of ‘detox’. All in all, I find this lady quite awesome!

Too much talk and not enough pics?
Okay, here’s a nice one of a kitten. 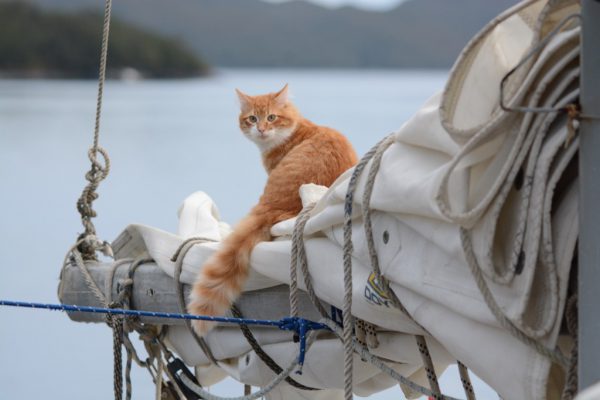 Fish has travelled with us all the way from Puerto Natales and is now almost one year old. He seems to like the lifestyle. Even now that we’re alongside, he seldom goes off the boat. His passion is climbing, and ever since the day that he saw Nick sitting in the spreaders he’s been trying to get up there.
Mind you, if he could shinny up the pole, he might get more than he bargained for. 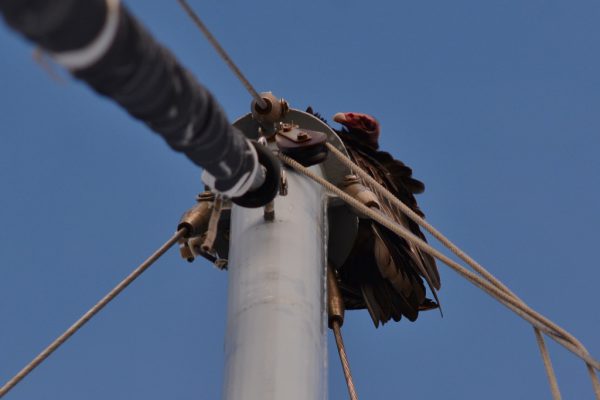 You know those owls that people put on the top of their mast to keep the seagulls away? Well, around here we have vultures to do the job!