Now, according to the rule of Patagonian cruising – the rule diligently pursued by Edward Allcard – we ought not to have stayed in Estero Dock. “Never waste a fair wind,” said that wise man. But as I’ve said before, in this part of the world you have to choose between using the fair, sunny days for sailing or using them to explore terra firma; and having got 52 miles under our belt, when the sun rose on the following morning – and when it rose into a clear blue sky – we decided to be a bit stupid. The breeze was still in the south, but we decided to throw away the opportunity to clock up another fifty miles and instead spend the day hiking. After all, we came here to see the place, not just to whistle through!

Estero Dock is beautiful – in the right weather…  – and since a picture paints a thousand words there’s no need for me to describe it. 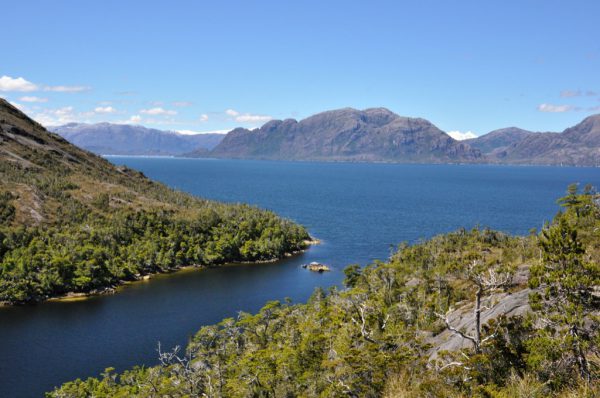 This is the view down onto the entrance. Like everything else in this region, the valley was carved by an ancient glacier, and the glacier evidently spent a long time with its snout ‘pinned’ at the entrance. This resulted in the creation of a moraine, part of which is visible. Vessels enter by leaving the rocks to port. 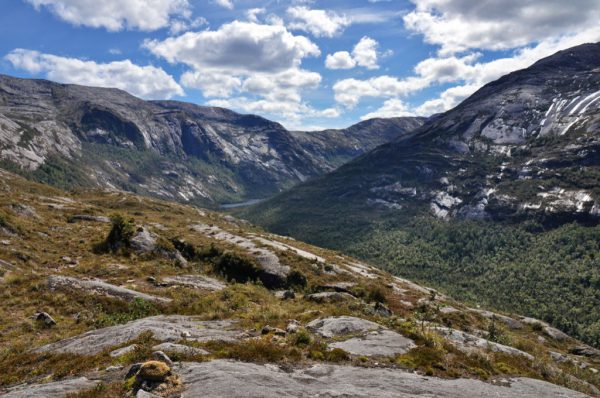 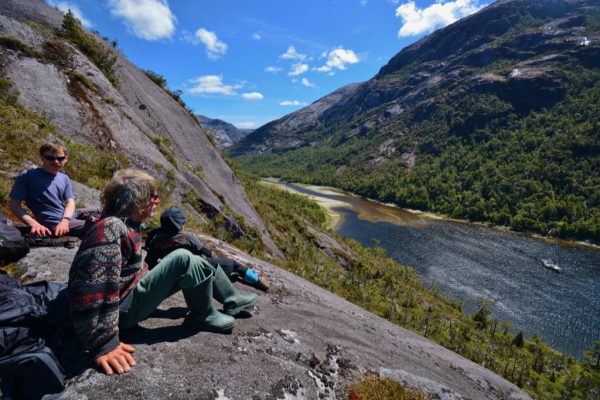 One can actually row quite a distance towards that lake, but eventually the way is blocked by a waterfall. To get any higher up the river one would need to battle through the forest; and indeed, that is what we also had to do in order to ascend the valleyside and take these photos.
As I’ve said before, you don’t really appreciate footpaths until you’ve spent an hour trying to travel through the Patagonian forest. Our average speed in this terrain is 100 yards per hour. 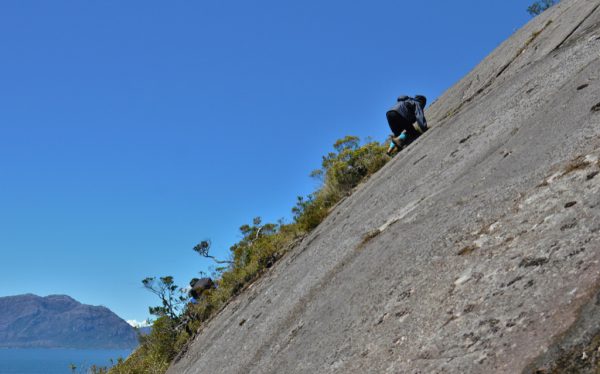 Above the forest the trees gave way to bare rock – beautifully rounded by a million years of glacial ‘sandpapering’, but not very easy to climb in wellies. 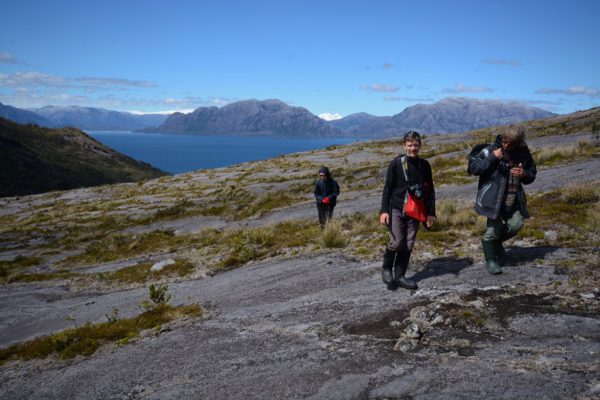 However, having found our way through and up and around these obstacles we came to an area where the walking was as easy as on a pavement. At one time a thick sheet of ice will have lain over this surface too, and hence it has also been abraded. 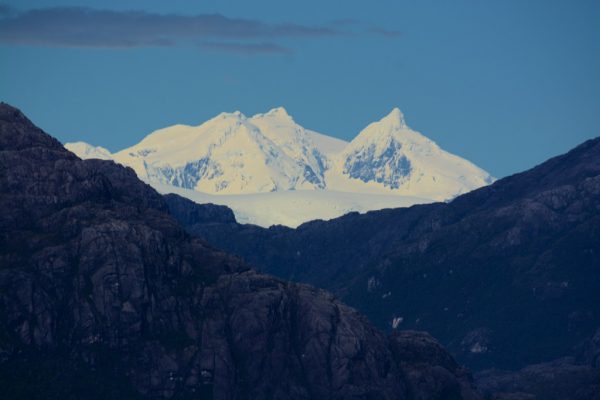 The ice is not so far away. These mountains are on the far side of the channel, opposite Estero Dock. On their opposite side they face Estero Peel, and they feed the glaciers at the head of that inlet. 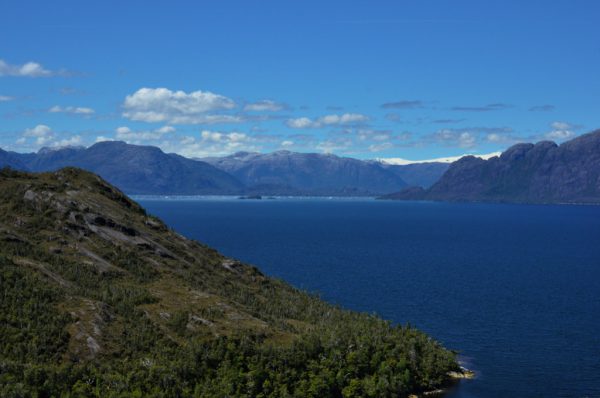 Also on the opposite shore, and just a mile or two further along, lies Seno Penguin – and we could see a field of ice large floes in the mouth of this fiord. The glaciers at the head of that valley are evidently quite active. I wanted to go and check them out.
Ach! Why do I always want to be somewhere else? It’s a very common syndrome in modern society; we have so much, but we’re always looking around to see if we might be missing something. I guess it’s a kind of greed – a greed that will never be satisfied. Some people are addicted to money and they can never ever have enough, and some of us want more, more, more beauty; more experience of life; more satisfaction for the senses. In truth, we’re just as lost and confused as the tycoons!
But at least we’re only spoiling things for ourselves and not spoiling the planet… 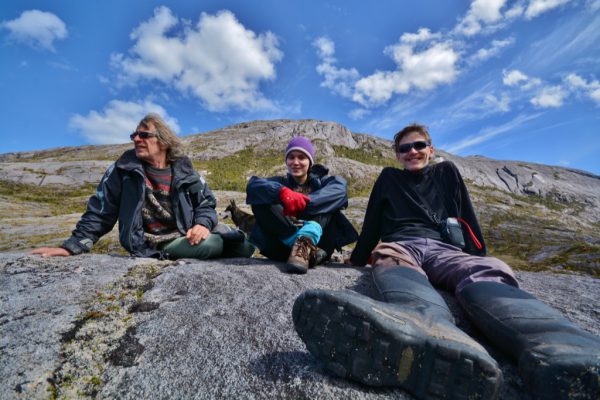 “What are you woffling on about now? Just sit down and shut up and admire the view.”
This lot are much better than me at just enjoying and just being.

Although it looks empty there are a quite a few creatures living on this mountainside. A condor flew over and checked us out while we were eating lunch – (I guess it was hoping one of us might drop dead) – and in amongst the trees there were rayaditos and hummingbirds. 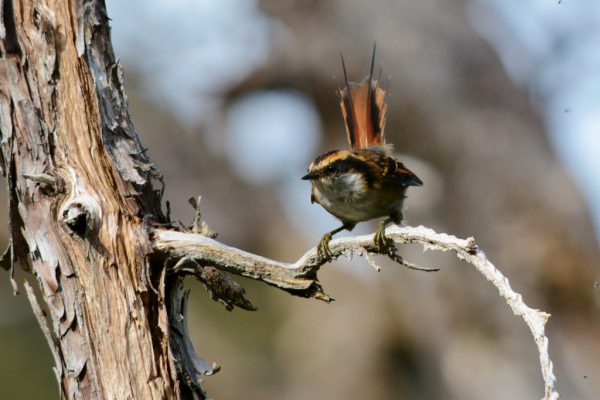 Thorn-tailed rayaditos are always curious and will come very close to a person walking through the woods. This one actually landed on my head for a moment.
The hummingbirds came when I blew the ‘silent’ dog whistle. 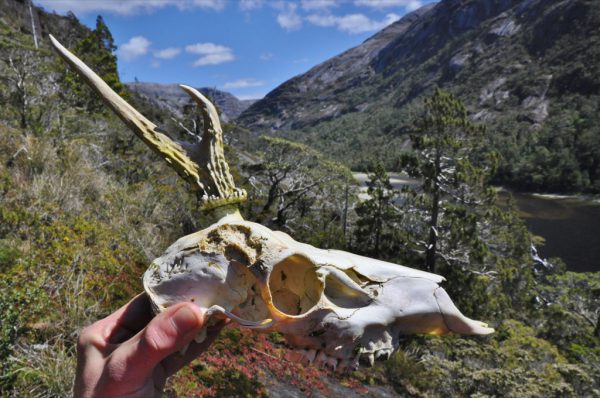 Although we didn’t see any live ones, there are evidently huemul deer around. (Pronounced wem-mool, with the emphasis on the mool.) This species is very rare; some reports say that there are only a thousand left – but I can’t imagine that anyone has tried looking for them on the remote islands of the channels.
Since the skull is intact the animal probably died of natural causes. Even so, I’ll bet that where there are deer there are also puma. 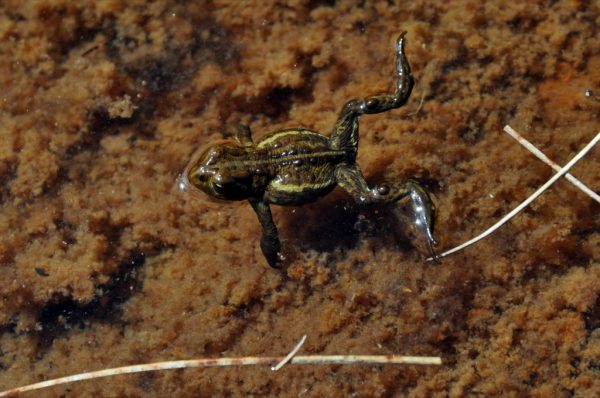 We also saw scores of toads, which live in the puddles atop the mountain. The puddles were drying up fast, and this put our attitude to the climate in perspective. Unlike you and me, the local fauna doesn’t hope for a break in the weather and rejoice at the sight of the sun; on the contrary, these animals like rain. 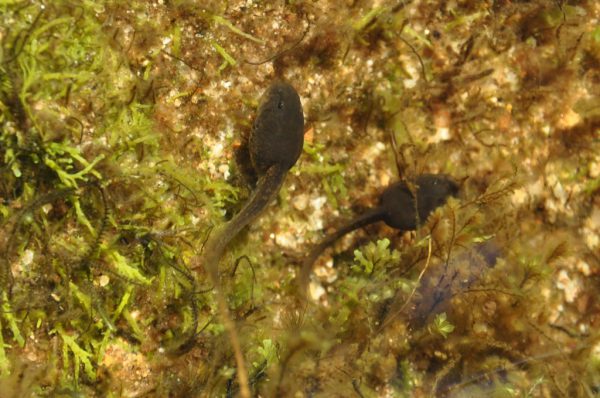 Tadpoles in a puddle which, all being well, should never dry up in their lifetime.

As we descended through the woods I thought I heard the sound of an engine, and looking up I was astonished to see the mast of another yacht. Astonished because, just half an hour earlier we’d been remarking on how amazing it was that we could have this whole, wonderful wilderness all to ourselves. 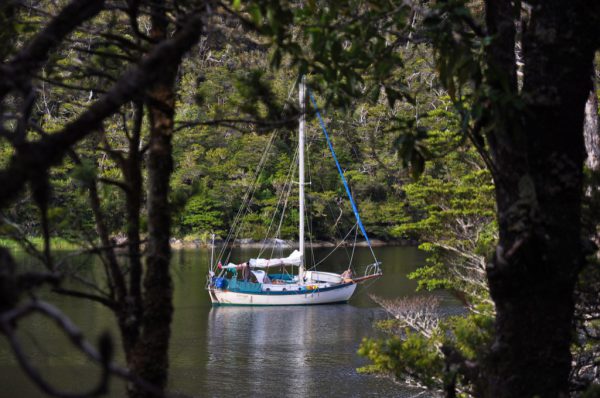 This is Tortuga, an American yacht. Her crew told us that they were travelling around South America – in just one year! They had already been out for six months, so by the time you read this they will probably be back at their desks.
This was the only other yacht that we met during our six week passage from Puerto Natales to Puerto Eden. I’m sure there must have been a couple of others around, but the place is so vast that we don’t tend to bump into one another.

When we woke on the morrow Tortuga had gone, and we pushed on too – to Caleta Gage.