It’s been six months since we posted a new article on the website, and people are beginning to wonder: “Have they given up cruising?” “Maybe they sank…”
The answer is, no. Mollymawk is fine. Four-fifths of the family are still passionate about travelling under sail; and three-fifths of us still have the boat as our Primary Residence. The fourth fifth is on the point of investing in her own boat. But, despite this, the past year has been spent Not Cruising.

This past year, Caesar spent some months sailing to Antarctica – but neither Nick nor I did any sailing at all; and that is a lifetime first for both of us. What have we been up to instead?
“Oh, you know… This and that…”
Seriously! How can a family of dyed-in-the-wool cruising bums suddenly spend a year not hoisting the sails or weighing the anchor even once?
Well…. it happened thus:

One year ago we arrived in Valdivia after more than a year of travelling in the Chilean Channels. We came here, partly because it sounded like a nice place, but mostly because we needed to slip the boat.
The last time we slipped the boat was in 2008, in North Africa. In fact, before we came to Valdivia, that was the only time that we’d ever had the boat out of the water since her launch in the year 2000.

We hadn’t really meant to leave it so long before slipping again. We almost came out in Piriapolis, in Uruguay, in 2012. We got as far as moving the boat into the space below the travel lift – but then someone warned us that if you slip your boat here, you’re not allowed to do any welding. (And it goes without saying that a rufty-tufty steel boat is always going to need something welded).

After that, we tried the opposite side of the River Plate, in Argentina; but Mollymawk is heavier than most Argie boats, and there was nowhere with a crane which was man enough.
We went back up to Brazil and asked, first in Paranagua and then in Rio Grande – but, again, we were too big. In retrospect we should have detoured back up to Santos – Santos is where the big Antarctic charter yachts haul out – but we’d heard bad things about the city; and besides, we reckoned that we could press on south and slip the boat in Puerto Deseado.

It transpired that in Deseado there were no facilities for hauling the boat, but we were able to dry out against an old wooden quay. This allowed us to see just how much work needed doing below the waterline. We found that there were little rusty blisters all over the hull, and the anodes were eaten away. Or rather, twas actually the other way about, of course. The decay of the zinc anodes had encouraged the corrosion.

We tried to buy new anodes, but there were none to be had.
“Not to worry. We can haul out in Punta Arenas.”
A phone call to the boatyard in Punta Arenas quickly quashed that idea. Slipping there was well outside our budget.
We pressed on, regardless.
Well… not quite regardless. We had planned on taking Mollymawk down to Antarctica, but now we decided that, since she needed urgent attention, we must abandon that idea. Instead, we would hurry through the Beagle Channel and the Magellan Straits and the Pacific channels, and slip the boat, pronto.
And so it was that, two years later….. we finally slipped the boat in Valdivia.

It turns out that hurrying is a habit. If you abandoned the habit 40 years earlier – if you’ve never had to meet deadlines for a job or a mortgage repayment scheme or wot-not – then, basically, you lose the ability to hurry. The last time I had to meet a deadline was when my Geography teacher set us essays about some boring, faraway place called Brazil. (Did you know that the mainstay of Brazil’s economy is her shoe industry? There may also have been mention of cows, but I can’t recall any reference to the world’s biggest rainforest or the biggest river.) Nick abandoned hurrying when he was only a few years older than that, at the age of 23; and Caesar has never had to hurry. Meeting deadlines is one thing that I neglected to include in the Home School curriculum.
Have you ever been to West Africa, or some other place where the people live in a largely traditional manner? And have you ever observed the frustrating (to us) but (to them) very merry inefficiency with which those people deal with tasks such as building a boat or fetching water? Well, it seems to me that we Mollymawks have now attained this same level of incompetence.

This inability to order our time efficiently is also the chief reason for the fact that, having finally slipped the boat, and having eventually put her back in the water, we were still putting the interior back together six months later. However, there have also been other factors which hindered progress. Principle among the hindrances has been Brexit.

Two and a half years ago, I described how the result of the Brexit referendum had rocked our equilibrium:
“Had we been drifting about on the ocean when it took place then we might have remained unmoved by this extraordinary débâcle – but only for so long as we remained out there. As it was, we were swept along on the current of events like a yacht struggling through heavy seas, and the final outcome was like a rogue wave smashing down on our vessel. Even two weeks afterwards, I still feel overwhelmed; I still feel devastated.”

Well, this feeling of devastation and dismay has never really left me, for, as we all know, Brexit has turned out to be an even bigger can of worms than we Europhiles predicted, and Britain is currently falling apart at the seams. How has this hindered progress aboard Mollymawk? Partly because it leaves me feeling alternately angry and depressed, but mostly because I’ve spent two to three hours each day, during the past year, fighting it.
Whatever they may or may not have wanted in June 2016, when Brexit was an undefined pie in the sky surrounded by rainbows and unicorns, it is now clear that the majority of the British people do not now want to leave the EU. Polls now show that, having seen what Brexit actually smells like, the British people want another say. Either that, or they just want Theresa May to cancel the whole damn thing, so that we can go back to whatever it was we were doing before that ghastly Black Friday.

Besides costing us time spent reading the latest news and writing e-mails to MPs, and so forth, Brexit also forced us to fly back to Britain – again.
Flying is this family’s biggest environmental sin. The WWF have an on-line quiz which enables the user to calculate his personal CO2 footprint; and since we don’t eat meat and don’t drive a car and don’t buy a lot of stuff, our footprint is always pretty small – until we have to add in a transatlantic flight. A two-way flight doubles the size of our annual footprint.
Even so, it had to be done. We are not about to give up our citizenship of Europe just because a bunch of greedy tycoons duped 52% of our fellow Britons into ticking the wrong box. Our plan is to become residents, and eventually citizens, of another EU country; and to that end we flew to Europe and spent three months searching for a place where we would fell at home.

We ended up making an offer on a tiny ruin, but we’re also chasing a piece of land on an adjacent hillside. This land was formerly covered in native forest but has been ravaged by loggers. A year before our visit, the last vestiges of verdure were razed by a fire, so that the place now looks like a building site.
What do we want with such an ugly brown hillside?
Well, we want to replant it, of course! We want to create a forest garden, covering the naked soil and shale with with sweet chestnut, birch, and oak, and with fruit trees, walnuts, almonds, figs, and olives.

You’ve probably heard the story about the sailor who planted a garden. He tilled the soil and sowed the seed and watered the plants; and then, just when the crops was ready to harvest, the wind changed and he went back to sea. But that doesn’t matter, because the point is that he planted the garden!

Politics; our own incompetence – and one other thing, besides, has kept us from getting away from Valdivia. That thing is the Valdivianos. Never, in 30 years of travelling have we ever felt so much at home as we do in Chile; and never have we made as many friends as here, in this little riverside city.
Never have we known such fellowship as from the mixed gang of locals and ex-pats who are now our cherished Valdivian family.
Never have we been so warmly welcomed at a foreign yacht club.
Never has Caesar had so many pretty girlfriends… 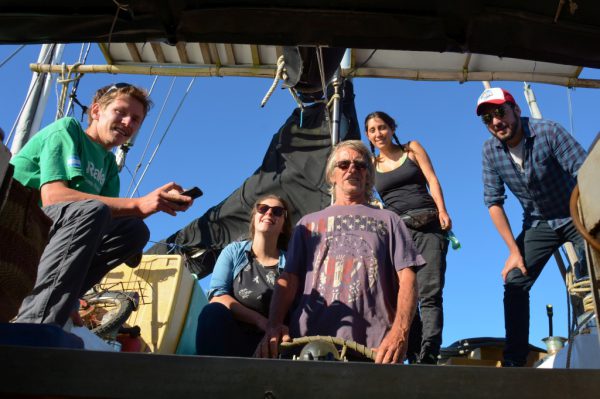 Never have we found such a small place with such a big social calendar – the music is endless; the festivals are weekly; the bars overflow with hippy hospitality.
And speaking of bars – never have we found a place, outside of England, with such good, home-brewed beer.
Put it all together, and it’s little wonder that we’ve had at least three leaving parties. But the time has now come when we really have to cut the cords and go.

The ocean is calling to us.
And the aduana are threatening. Two years is the maximum time that a foreign vessel may remain in Chile without a fine, and they’ve already very kindly allowed us five months more than our due.
So, today we’re off.
Yes, TODAY!
Today Mollymawk will unfurl her feathers and stretch her wings, and we’ll be off again, heading for the horizon.

When we wash up, on some other shore, we’ll do some catching up. We’ll tell you all about our electrolysis and corrosion and all about our new copper bottom. And we’ll add to our catalogue of articles about the Channels. We’ll bring you the latest tidings from the Ship’s Naturalist. We hope to be able to bring you news of Xoë and Gean, who are maybe, possibly, probably on the point of buying their own boat. And we’ll certainly tell you all about the ancient riverside port of Valdivia.

Until then, we wish you all safe and well and happy.