The next stage in Mollymawk‘s journey north through the Chilean channels showed us the difference that a drop of sunshine makes – or rather, ’twas not just the sunshine but a change in the wind.
Throughout our entire journey thus far, all the way from the Straits of Magellan and up the Smyth Channel and the Sarmiento Channel, we’d been battling against a headwind. Sometimes it was a light headwind which obliged us to motor in order to make harbour before nightfall, and at other times it was a force five which had us zig-zagging to and fro all day, fighting for every inch of the way; and the first half of the next leg of our journey fell into that category.

Leaving the Peel Inlet we had the choice either of returning to the thoroughfare discovered by Pedro Sarmiento and rediscovered by William Skyring or else we could take a short-cut via a narrow channel named for William Pitt. 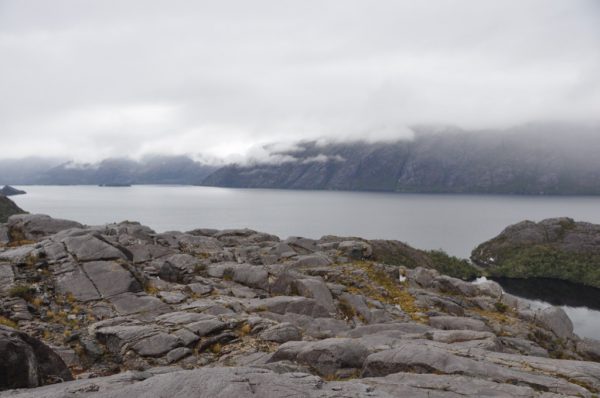 Just in case you were wondering – the Pitt and Peel channels were both so-named by Skyring, a man who was evidently eager to celebrate great Britishness. He had already christened a channel for Admiral Nelson, champion of the Battle of Trafalgar. The Peel Inlet was named in honour of a British politician who had very recently won renown for inventing the police force. He was eventually to become prime-minister. Meanwhile, Canal Pitt commemorates a father and son both of whom had served as prime-minister on more than one occasion.

For myself, I favoured the idea of returning to the route made famous down the ages. I was eager to identify the headlands named by Sarmiento and find the bays where Skyring anchored the Adelaide. Moreover, this principal channel was the one followed by Edward Allcard when he made his ground-breaking voyage fifty years ago, and I was keen to visit the places where he stopped.
However, the short-cut route via Canal Pitt would save us some thirty miles, and when you’re slogging up hill against the prevailing wind – and slogging in the rain, as often as not – thirty miles matters. It might represent two or even three days of travel. So it was that the Pitt Channel got the vote, and on leaving the Villarrica lagoon Mollymawk turned sharp right into this narrow corridor.

The Pitt Channel was also the route chosen by Bill Tilman after his adventures on the Patagonian ice-cap. Reading his account, one gathers that morale was low at this juncture and that he and his crew would have preferred not to have to beat to and fro in a passage which is 25 miles long and scarcely a mile wide – but they had no choice: As we have seen, Mischief was now without the use of her engine. The old gaffer made up at about one knot – which is rather less than Molly, with her heavy cargo of books and tools and other ‘personal effects’, manages to achieve in similar circumstances.

In the vicinity of the tall cliffs of the Pitt Channel the wind often veers suddenly and Mischief was sometimes taken aback – as, indeed, was Mollymawk. On one occasion, in going about the old gaffer found herself in irons – unable to pay off on either tack, but merely drifting backwards with her bows into the wind. During the panic which followed, Bill Procter tossed out the anchor – a pointless move, as Tilman evidently reckoned it to be, since the channel is around 200m deep and its sides almost sheer. We may judge just how close to the shore the boat had drifted by the fact that the hook actually found the bottom. This brought the bow through the wind and enabled the crew promptly to get underway on the new tack. Finding ourselves in a similar situation at the end of one tack – with Molly having failed to get through the wind, so that we had to send her charging towards the cliffs again to pick up some speed – I wondered if we were in the same place; and I wondered whether to run for’ard and ready the anchor. But instead I hovered beside the start button for the engine.
Ah! What a wonderful thing it is to have an engine standing by! In the event, however, on the second try Mollymawk came through the wind and all was well.

Tilman knew of no refuge in the Pitt Channel – he was obliged to carry on sailing day and night, until he came to the other end of the corridor – whereas we had the benefit of other yachtsmen’s diligent exploration. Our cruising guide offered us the choice of two havens, and we plumped for the second – a place which is known as Otter Pool.

Otter Pool must have been discovered in weather rather different from that which we had been experiencing, because the entrance is well hidden and only a suicidal maniac would have pointed his vessel at the wave-lashed shore without the prior knowledge that a port lies hidden here.
(There is scope for a little bit more exploration in this channel, if any adventurous mariner should find himself passing through in clement weather. In particular, Bahia Pitt looks interesting.)

Otter Pool is a delightful little cove – and it must be even more delightful on a day when the rain isn’t washing the sky and hiding the hill-tops and drenching the sodden bog.
Mind you, bogs don’t come into existence without perpetually sodden weather, and if the climate changes, and the region sees more sunshine then the mosses will die; and then Patagonia will be covered in a peat moor instead of a living bog.

As I said at the outset, our journey along the Pitt Channel showed the difference that a change in the wind and the weather makes to cruising in the Chilean fiords, for after we had spent two days at Otter Pool the wind suddenly went into the south. The sun came out, and we were tempted to stay and walk in the hills – but as Tilman and Allcard were both found of saying, “One should never waste a fair wind; especially in Patagonia”.
So, off we went.

The difference between the two halves of this journey is plain from our track. To the casual observer it probably looks as if we motored for the second half, but that’s the half that was made with the wind on the stern.

And whereas we had struggled hard to win just 19 miles on that day when we were beating to and fro, on this day, running downwind effortlessly and in the sunshine, we made 48.

This was also the first time that we’d had the chance to have a good look at our new genoa. Acquired from the same stable as the main and mizzen, it was shipped to Puerto Natales and had been pulling us along for the past several weeks – and very efficiently, I may say – but this was the first time that we’d been able to spread it out in front of the wind.

New sails are generally the most expensive item on the cruising sailor’s budget, and we have been careful to spread the load of that expense. Our main is now getting on for eight years old, and the mizzen is around four. We find that a well-made sail lasts for about ten years – after that, the accumulative effect of the sun’s UV rays starts to show and the cloth is likely to give way in heavy weather – so I guess that our main will be due for replacement in a couple of years. In the meantime, it still does its job very well. We’re very pleased with it and will have no hesitation in buying the next one from the same loft – Doyle Caribbean.

When not admiring our splendid sails, we spent this day watching the scenery glide by. How much prettier everything looks in the sunshine!  Indeed, even a hideous tower block or an oil refinery can look lovely in the right light, and perhaps the deceit was not so dissimilar here. The austere mountains today seemed friendly and safe.

Eventually we rejoined the main channel, arriving more or less opposite the place where old Pedro Sarmiento entered this maze from the Pacific Ocean. We gazed across at the infamous Gulf of Trinidad. Today it seemed like a nice place for a cruise. And the Concepción channel, running away to the south-west, looked safe enough; and even the island of Madre de Dios looked lovely.
Sarmiento it was who named that island – indeed, most of the names in this particular vicinity date from his explorations here, some 500 years ago – but one feels that he should have got to know the place a bit better before he paid this compliment to the Lady. He could hardly have chosen a less suitable place whereon to bestow a name which is generally associated with gentleness and nurturing, for Madre de Dios is notorious for its appalling weather. Skyring, when he came this way with the Adelaide, had a hellish time, and the only yotties we know who have been here never mention the name without shuddering.
Yet there it was, spread out before us under a blue sky and looking as welcoming as the Isle of Wight or Chesapeake Bay. Oh, Sunshine, you beguile us so!

It would have been nice to be able to explore the Golfo de Trinidad – indeed, it seemed almost criminal to waste such a golden opportunity to explore the place or at least to peep into it – but then we wouldn’t have this wind and this sun to use elsewhere.
And that is the Patagonia Problem in a nutshell: Given just one or two days of sunshine and fair wind in, say, six weeks, what will you do with them?
Some say that the answer is to sail the route in the other direction – to come down through the channels, riding on the northerlies – but this means that you’re likely to be sailing always in the rain. Moreover, a friend who adopted this course still found that 68% of his travelling was done under engine.

We bowled onward, past various places which were also crying out to be explored: Past Estero Lecky (yes, him again!); past Paso Brassey with its numerous fiords; past Seno Europa with who knows what treasures to be discovered as it winds its way into the mountain… All of these beckoned to us, and all were ignored – until we came to Estero Dock.
Throughout the day we’d been continually advancing our destination, selecting a new one – further along the way – when it became clear that we could easily get past our current goal; but when we came to Estero Dock we called a halt. There was time enough for us to clock up another five or ten miles, but Dock just sounded so nice that we didn’t want to miss it – and so that is where we brought the day’s journey to a close.
On an average day, beating along the channels, we might cover 15 miles, but today we had done 52.