With the discovery of the route around the bottom of the continent, the Straits of Magellan became something of a backwater. As the centuries rolled past, mankind gradually moved away from barbarous nationalism and embarked on an era of scientific exploration – albeit still with commercial objectives – and it was in this new Age of Reason that men such as Philip Parker King and Robert FitzRoy were sent to make a proper investigation of Tierra del Fuego.

And then, in the wake of the explorers and the surveyors came those people who simply wanted to see the world for themselves – such as us. 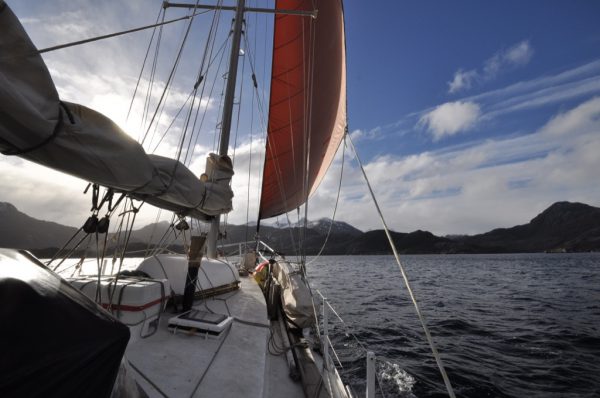 Sailing along the Straits, from Cape Froward westward, we commemorated all of these villains and heroes, from Magellan and Sarmiento through to FitzRoy and his oppos, reading of their exploits and visiting the places where they moored.

We found that the weather in the western half of the Straits can be either grim and grey or just grey. And although it is often blowing old boots, it can also be as calm as the proverbial millpond.

We quickly learnt that, in this region, the price for a day of calm weather is usually four or five days of howling wind together with rain or snow. So one does well to keep an eye on the barometer and plan ahead.

We shared Caleta Mostyn with a large colony of rats which used our shorelines as a means of exploring the new addition to their territory.

We’ve since heard that these creatures have enjoyed a population explosion this winter, due to the unusually mild weather. We met them in several other places. They will happily come along a line which is awash for 100ft in salty, icy water, and they also swim and climb ably. We’ve been told that some of the fishing boats have taken to carrying cats in order to deal with the problem. The rats are of an endemic species, and we didn’t find them offensive – they always vacated the premises and went home before daybreak – whereas one can anticipate that the cats, when they get ashore and meet up and multiply, are bound to have a very negative effect on the local birdlife.

As we have seen, despite the prevailing weather conditions, some folks – such as Pigafetta and Sarmiento – affected to love the Straits of Magellan. And indeed, amongst the explorers who followed in the wake of those ancient mariners (and ancient PR men) there were a few genuine enthusiasts. Philip Parker-King, commander of the British expedition renown for its survey of this part of the world,  tells us that the scenery instead of being …’horrible,’ is at this season exceedingly striking and picturesque. Likewise, Robert FitzRoy, the second-in-command of that same expedition and captain of the Beagle, left us with most poetic descriptions of the view in the Straits of Magellan. I should have liked to pass some days at this place, it was so very pretty, says he of one unprepossessing nook near to the southernmost bend in the Strait.  Besides liking snowy mountains and dense shrubbery, FitzRoy also thrived on the mixture of danger and discovery entailed in fulfilling his duty; but the fact is that this young man only came to have the job because it had killed his predecessor.

That speck in the distance, in the photo above, is, indeed, an open boat – but the fishermen aboard her have waterproof clothing, an engine, and a cosy mothership to which they will return before nightfall.

For Pringle Stokes, Tierra del Fuego was his nemesis. He had been given the task of surveying the western approaches to the Straits, where the winds are at their worst and the shelter least.  FitzRoy would have lapped it all up –  on the Beagle‘s next voyage, FitzRoy had great fun risking life and limb and the ship on the exposed coast between the Straits and the Horn: a coast so perilous that the Chilean authorities will not give permission for yachts to sail here – but Stokes was a mere mortal. A few excerpts from his journal are enough to show us how he passed his time and what he thought of the place:

“About seven in the evening we were assailed by a squall, which burst upon the ship with fury far surpassing all that preceded it; had not sail been shortened in time, not a stick would have been left standing, or she must have capsized. As it was, the squall hove her so much over on her broadside, that the boat which was hanging at the starboard quarter was washed away. I then stood over to the north shore, to look for anchorage under the lee of a cape. … On closing it, the weather became so thick that at times we could scarcely see two ships’ lengths a-head. … It was nearly dark ere we reached it; and in entering, desirous to keep well up to windward, in order to gain the best anchorage, I went too close to the outer islet, and the ship struck violently on a rocky ledge. However, she did not hang a moment, and was soon anchored in safety.”

“As we neared the Cape the wind fell, and the Beagle was set rapidly towards those dangerous rocks, called the Apostles.”
…
“The shore on which we now stood was that of a horrid rock-bound coast, lashed by the awful surf of a boundless ocean, impelled by almost unceasing west winds.”

“During the day we tacked nearly thirty times, and when within ten miles of Westminster Island the wind blew with redoubled violence. The evening began to close in. Still we dashed on, and still were driven back. The sea broke over the vessel many times, and she laboured very much and oftentimes was buried in the deep trough of the sea.”
…
“Nothing could be more dreary than the scene around us. The lofty, bleak, and barren heights that surround the inhospitable shores of this inlet were covered, even low down their sides, with dense clouds, upon which the fierce squalls that assailed us beat, without causing any change… Around us, and some of them distant no more than two-thirds of a cable’s length, were rocky inlets, lashed by a tremendous surf; and, as if to complete the dreariness and utter desolation of the scene, even the birds seemed to shun its neighbourhood. The weather was that in which the soul of man dies in him.”

“The only resource was to bear up for shelter under Cape Tamar, where the previous night had been passed. Even this was a dangerous attempt … While running about eight knots, a violent shock—a lift forward—heel over—and downward plunge—electrified every one; but before they could look round, she was scudding along as before, having fairly leaped over the rock.”

When not bashing the Beagle on the rocks off Cape Tamar, Stokes left her at anchor there and went about his business in the whaleboat. Again, it’s what FitzRoy would have done and loved – but as I’ve said before, the idea of scudding about these waters in an open boat is simply unbelievable, and it’s no wonder that Stokes didn’t enjoy it. He talks of constant heavy gales with thick weather and incessant drenching rain.
And to what purpose was all this, he must have asked himself?

“Our discomfort in an open boat was very great, since we were all constantly wet to the skin. In trying to double the various headlands, we were repeatedly obliged, after hours of ineffectual struggle against sea and wind, to desist from useless labour and take refuge in the nearest cove which lay to leeward.”

Is it any wonder that, after a year of such fun and games, Pringle Stokes was losing his grip?
(Pringle was his Christian name, by the way – and one can’t help thinking that this burden may have added to his despair.)

The Adventure and the Beagle sailed north to the tropics to refit, but this respite may have made Pringle Stokes even more despondent. When the time came to head south again he was supposed to sail directly to the Straits and to Port Famine,  where he would rendezvous with his commander, but instead he dallied for a month on the coast of Argentina. Having eventually arrived, he was despatched to pick up where he had left off, exploring the windswept, wave-chewed coast between the western entrance to the Straits and the notorious Golfo de Penas. During the Beagle‘s return from this mission, Pringle Stokes locked himself in his cabin; and five days after their arrival, “in a momentary fit of despondency” – and having learnt that Parker-King planned to send him back up the same coast – he shot himself.
Although he fired the bullet into his skull he remained conscious, eventually expiring twelve days later from an infection of the wound.

That which to the 19th-century sailor was unbearable, can for the modern traveller be something close to heaven. As I’ve said before, our ability to appreciate this region has a lot to do with the comfort, convenience, and safety provided by modern technology – but there’s also something more. For Pringle Stokes, citizen of what was then the most powerful nation on Earth, Europe – and England in particular – represented comfort and society; and this place, by comparison, was simply hell. For the traveller of the 21st century, the viewpoint is very different: For us, the Western world is a tarnished place, spoiled by over population, excessive material consumption, and everything that those two, between them, have brought about. Meanwhile, these stark, weather-ravaged mountains represent Nature in the raw.

For how much longer can they endure, I wonder?
Oh, the rocks will still stand long after the human race has expired – but for how much longer will they preserve this aura of pristine wilderness? Homo sapiens now has the ability to surmount this harsh climate with his electric fires and tarmac and concrete; he has the opportunity to plant himself here despite the obstacles; and the merest whiff of civilisation tarnishes and tames this kind of beauty.

For Pringle Stokes, the isolation was unbearable. For us, the isolation – in as much as it still exists in this age of satellite phones and engines – is part of the appeal.
What does the future hold? For how much longer will Narborough’s Land of Desolation remain so splendidly desolate and aloof?
The whisper is of salmon farms…

Already there are two salmon farms tucked away in a fiord on Isla Desolation. There are many more under construction on the island opposite Cabo Froward (half-way through the Strait), and we hear that approval has been given for 270 on the shores between them.

Further to the north, the salmon breeders face constant aggro from citizens who stand in opposition to this most invasive and destructive form of farming; so now, we hear, they’ve decided to move their operations to a place where no one is watching to see how many tons of processed fish-food and antibiotics they dump into the environment.
And there’s nothing that you or I can do – except spread the word and vote with our purses.

Next week we head north up the Canal Smyth, in Part V of this series.