One day we must tell you about our new Olfi…

Olfi is an action camera the size of a matchbox which takes pictures sharp enough to pin on your wall. Videos, too. And it costs a mere fraction of the big-name brand; and it’s Made in Wales!

To be exact, we were on the edge of Whaleboat Sound, just a few miles up from Cape Horn on the rim of the Pacific. 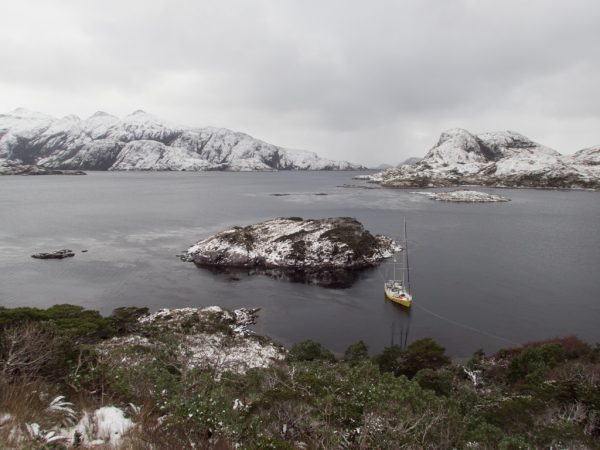 The days were short and cold. The weather was settled. Settled weather seldom lasts for more than a day or two at this latitude, and between the halcyon intervals it generally blows a gale – or worse. Force 12 is a regular occurrence.
All in all, we weren’t keen to hang around in this place for longer than we needed, and we were making our way through the area as fast as we could, stopping every night and pressing on at daybreak.
That’s the way it had been for the past week – and then, on this particular morning, we got the shore-lines in and we found that we had a rope around the prop.

The water temperature was 2°C. Although we do carry diving bottles and wetsuits, we’re not equipped for ice-diving and there was a lack of volunteers raring to go over the side, even if only for a moment.
Caesar once suffered cold-water shock when he jumped into water of 8°C, and I can still recall the feeling of ‘brain-shrink’ I experienced when I once jumped into water of a similar temperature.

We were all alone. We had no recourse to anyone but ourselves. And that’s when I thought of Olfi. “Olfi can do it!”

No, Olfi can’t cut lines. But he comes with a rugged waterproof box, which fastens to a ‘selfie’ stick; and he’s got some sort of wifi chip in his brain. Forgive me if I forget the jargon, but what I’m saying is – you can connect Olfi to your smartphone and they’ll ‘talk’, enabling you to see whatever he sees. Damn clever.

With Olfi as his eyes, and using a kitchen knife lashed to the boathook, it took Caesar just ten minutes to cut through the line which had wrapped itself around the propeller, and set us free.

Without Olfi we’d have been all day arguing about whose job it was to get cold and wet, and who would rinse the wetsuit…
In the subsequent weeks and months we’ve been having lots of fun with this eminently pocketable camera – but we’ll tell you all about that another day.