Last week we introduced you to the second of three families who have abandoned conventional living to do their own thing. The third family hail from Argentina and although they’ve been living aboard for many years they’re still breaking their last ties with home and haven’t yet embarked over any oceans.

This third liveaboard family are taking things to the opposite extreme from the Anasazis. Fernando and Barbara are more interested in comfort than speed and they prefer old fashioned construction over high tech. As I’ve said before, there are as many ways to go cruising as there are sailors – but the boats chosen by these two families are probably about as far apart as one could find. Anasazi, as we have seen, is a carbon-fibre composite, fin-keeled racing boat, whereas home for Fernando and Barbara and their little boy, Juan, is a ruddy great 150ft iron schooner.

Gringo was built more than a century ago in Italy, and the first half of her life was spent trading coal and corn between Ireland and Argentina. She’s believed to be the oldest sailing ship still voyaging. When Fernando found the boat she was lying on the bottom of the Rio Lujan, just outside Buenos Aires, with the tide washing over her deck and the mud lying thick in the hold. He’s spent the past 20 years sorting the old girl out, and now she’s finally ready to go – or, at any rate, she’s as ready as any old boat ever could be…

Fernando also has four other kids, and he is hoping that the oldest one, Archimedes, will be joining Gringo as Mate.

In a little while the family will sail the schooner north from the River Plate on a journey of discovery; and the first discovery will have to be how to make her pay, because maintaining a boat of this size is not something that one can do without an income.
So, if you fancy a cut price cruise in Brazil… watch this space.

Filling the Rucksack with Smiles

At the beginning of this short series of articles I said that I would introduce you to three families who had abandoned public health care, the national curriculum, state pension schemes and The System in general, but actually I’m now going to tell you about a fourth. They’re an equally good example of cutting loose in an admirably feckless fashion, but they’re doing it without a boat.

Txell (Shell) and Alvaro and their small son, Nico, are from Catalonia, in northern Spain, but we met them in the world’s most southerly town, Puerto Williams. Most people arrive in Puerto Williams aboard their own boat or on the little plane which flies across Tierra del Fuego, or else they travel on the ferry which comes all the way round from Punta Arenas, taking two days to get here – but Txell and her family hitched a ride across from Ushuaia. And having made friends with someone who had a spare room, and having hung out in the village for a snowy fortnight, they then hitched a ride north again aboard a Chilean warship.

That pretty much tells you everything that you need to know about this family. Despite the fact that they have an infant in tow, Txell and Alvaro are backpacking aimlessly around South America as if they had not a responsibility in the world, thumbing for lifts and accepting hospitality from whoever happens to offer. Their approach reminded me of that pursued by Buddhist monks of the Thai Forest tradition. It’s true that the couple do have an emergency kit, in the form of a credit card and a very limited amount of savings, but their aim, like that of the monks on dhutunga, is to go with the flow and enable others to experience generosity while they, in turn, experience gratitude. It’s all about trust; a trust in life itself to take care of us.

Txell and Alvaro have a website called Llenando la Mochilla de Sonrisas – Filling the rucksack with Smiles – and that seems an admirable summary of what they are about. In some respects their approach is a lot like that of Somira and James, in that they too are seeking to fill their little boy’s life with adventure; it’s just that their idea of adventure is rather different. 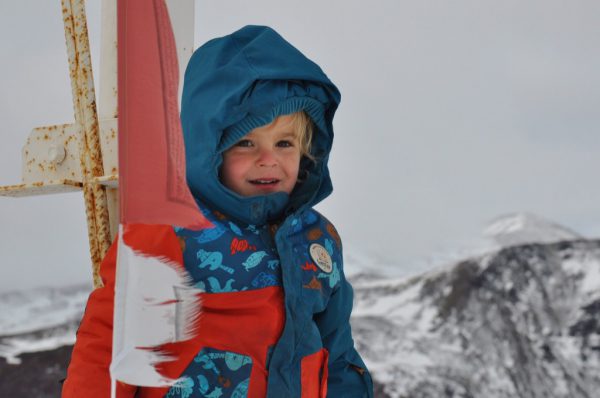 Unfortunately, as I write, this adventure in trust has been brought to a premature end by a death in the family, and Txell, Alvaro, and Nico have had to fly back to Catalonia. However, one assumes that they will eventually resume where they left off. In the long run I suspect that they will end up cruising – because cruising aboard your own home is a lot easier than lugging your home around on your back. I think that Txell clocked that pretty much the moment that she met us – or at any rate, as soon as she understood that cruising is not like travelling in a van. There are no big fuel bills; the wind pays our way.

When she heard this, a little light went on in Txell’s eyes. But would she really want to swap the freedom which comes from owning nothing other than a packet of nappies, a fancy camera, and the clothes in which she and her family stand, for the luxury of knowing where they will lay their heads each night?
There are pros and cons to both ways of life; and I’ll have more to say on the subject some other day.