If there’s anything on Chile’s Pacific coast – any place, or any sight – which exceeds the awesome beauty of the glaciers in the Beagle Channel, then we’ve yet to come across it; but, that having been said, this whole region is a fabulous wonderland of wild grandeur. To the Europeans who first explored the labyrinth of rock corridors, the stark mountains with their icy caps sometimes appeared almost cruel, and the gales which obstructed their progress had an aspect of vengeance. Travelling in their wake, but with the advantage of heated cabins and satellite navigation – and above all else, with the advantage of echo-sounders and engines, and with the benefit of the charts which those 19th-century mariners bequeathed to us – we modern-day sailors have it easy. Not for us the misery of clawing along a lee shore in an open boat, trying to find a safe refuge for the mother-ship. Not for us the gruelling slog up a channel which looked so promising but which turns out to be blocked by a mountain. Not for us the terror of striking a rock, as we seek the safety of an unexplored cove, nor the cold fear of finding ourselves shipwrecked on an inhospitable shore so many hundreds of miles from the nearest civilised help.
Not for us such dangers – and not for us the triumph of finding the cove or the pass, or the satisfaction of surviving against the odds.
Tierra del Fuego has been tamed.

There are, in fact, still plenty of nooks and channels in the Chilean channels which have not been properly charted, but now that the land has been formally claimed there are strict regulations regarding where a foreign vessel may go a-wandering. And wherever she goes, she is never allowed to be out of ‘earshot’ of the authorities. Even the local fishing boats, whose travels are less restricted, are required to report their position once a day, and yotties are supposed to ‘check in’ in the same manner – strictly for our own safety, of course, as the anonymous authors of the official paperwork explain.

Still – the authorities can’t tame the weather. And they haven’t tamed the scenery. Not yet.
The times are certainly a-changing: There are plans to open salmon farms – yes, even in the UNESCO Biosphere Reserve! – and there is talk of mines and of roads. But for the moment, Tierra del Fuego is still a glorious wilderness where one can spend days at a time, even on the prescribed route, without seeing another soul. 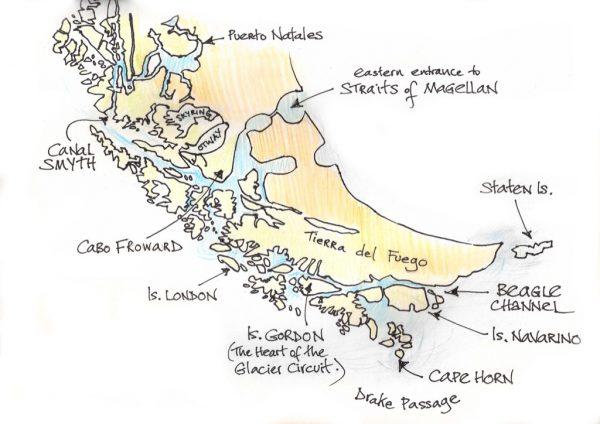 As I type these words we’re not even half way through our journey north via the Channels to Valdivia, but finding ourselves temporarily anchored in a place now touched by civilisation and within reach of the world-wide-web we felt the urge to share something of our recent adventures. I thought I might choose my favourite ten or twelve photos and, through them, provide a glimpse of this part of the world.
Having spent a day sorting them I found myself with more than a hundred ‘must haves’… so, I’ve decided to break the journey into stages; and the first offering is our valediction to the Beagle Canal.

The Beagle Channel is known in cruise-ship circles as Glacier Alley. However, the ships, blasting through at fifteen knots and constrained to stick to the ‘main drag’, are able to offer their punters only a glimpse of this icy grandeur. With our own transport, we are privileged to obtain a much more intimate view.

The glaciers were named, more or less at random, it is said, by the cruise ship operators. One is known as Holanda, though it comes from a mountain called Frances; one is called Alemania; one is España. The most prominent is known as as Italia.

According to long-established tradition, the world’s landmarks are labelled using the names given to them by the local native population but where no such name exists they are christened for – or by – their finder.  Thus it seems to us that, since nobody knows the names by which the Amerindian inhabitants of the region knew them, the glaciers ought really to be named after the men who first found and charted them.
One of the glaciers is known as Romanche, this being the name of the French vessel which travelled the channel under steam in 1882; but the first European to explore this region was Robert FitzRoy – and his name is altogether missing from the map.

In 1829 Captain FitzRoy left the Beagle moored amongst the islands just north of Cape Horn and took a whaleboat through the newly discovered Murray Narrows and westward. On the second day of their explorations they reached the place where the Beagle Channel divides, and they continued along the northerly arm, past “immense glaciers”. At night they camped on the southern side of the channel, and FitzRoy describes sitting by the fireside and gazing across at the “barrier of snow-covered mountains, on which the moon was shining brightly”. The water between was so glassy that it reflected the mountains, “but the stillness was sometimes broken by masses of ice falling from the opposite glaciers, which crashed, and reverberated around – like eruptions of a distant volcano.”

Three years later, in 1832, FitzRoy returned to Tierra del Fuego; and this time he sailed his whaleboat along the entire length of the Beagle Channel, heading westward down the northern arm and returning via the southern. On the occasion of his first visit his only companions had been his six oarsmen, but on this second voyage he took with him a young man by the name of Charles Darwin. After a couple of days the explorers reached the island, at the eastern end of the divide, which FitzRoy had named Devil Island. From here, the captain tells us, they enjoyed “a grand view of the lofty mountain, now called Darwin, with its immense glaciers extending far and wide.”
Without a doubt, FitzRoy is talking here of the mountain now called Monte Frances and of the glacier known to us as Holanda. Unfortunately, however, his own chart shows Mount Darwin further to the west; and thus when the French explorers visited the region, fifty years later, they named this same mountain for their nation. Various other peaks have since been ‘identified’ as the one which FitzRoy called Darwin, the current favourite being in the middle of the range, behind Seno Pia. This mountain is not even visible from the channel where FitzRoy and Darwin were sailing.

After taking measurements to calculate the height of the mountain now known as Frances, FitzRoy and his companions continued westward. They stopped to cook and eat their lunch “upon a low point of land, immediately in front of a noble precipice of solid ice; the cliffy face of a huge glacier”.
Fitzroy describes the remarkable blue colouration of the ice and also mentions the miniature bergs which floated in front of the precipice. He knew, of course, that these bergs had fallen from the glacier, but he had evidently not given much thought to the effect that their falling could have. He was about to learn.

“Our boats were hauled up out of the water upon the sandy point, and we were sitting round a fire about two hundred yards from them, when a thundering crash shook us – down came the whole front of the icy cliff – and the sea surged up in a vast heap of foam. Reverberating echoes sounded in every direction, from the lofty mountains which hemmed us in; but our whole attention was immediately called to great rolling waves which came so rapidly that there was scarcely time for the most active of our party to run and seize the boats before they were tossed along the beach like empty calabashes. By the exertions of those who grappled them or seized their ropes, they were hauled up again out of reach of a second and third roller; and indeed we had good reason to rejoice that they were just saved in time; for had not Mr. Darwin, and two or three of the men, run to them instantly, they would have been swept away from us irrecoverably. Wind and tide would soon have drifted them beyond the distance a man could swim.”

It was presumably in the aftermath of this incident that the captain named the great mountain in honour of his ‘mess-mate’ (as he terms Darwin).
There is not the least shadow of doubt that the glacier described in this incident is the one now known as Italia. It meets the description perfectly, and there is no other glacier in the entire length of the channel which fits.

Our previous visits to the glaciers were made during the summer months and coincided with sunny spells. This time the skies were grey – but we found, to our surprise, that this only made the glaciers even more impressive. When the sun shines everything sparkles, but when mountains are simply gaunt black rocks and the white snow looks treacherously cold and cruel, the ice is a stunning blue. Charles Darwin, writing of the same journey as FitzRoy, compared the colour of the glaciers to beryl and said that he could not imagine anything more beautiful.

It can be hard to understand the size of these slabs of frozen water. How big would a man appear if he stood beside the ice in this next photo?
Well, just to give you some idea – those little scratches on the hill in the middle of the foreground are full-grown trees. So, the answer is that the man wouldn’t appear. Supposing any man could get up there and get close to this ice cap, he wouldn’t even be a dot.

I suppose that if he were completely crazy a man with crampons might climb these ice pinnacles (below) at the side of Pia’s main glacier – these ones, at least, are accessible – but all the while as he climbed he would have to listen to thunder and gunshots as the creature moved slowly but relentlessly down the valley, breaking and reforming as it went. Awesome it would certainly be, in the truest sense of the word, but it would also be a game of Russian roulette.

As a rule, these glaciers cannot be reached in the winter – as a rule, the entire fiord is blocked by ice – but, as we’ve seen, this winter the weather broke the rules. All over the world, the temperature during the past few months has been higher than ever before; and thus we were able to get right up to the face of Pia’s tide-water glaciers and almost to the face of Garibaldi.

This is not to say that our journey was completely ice-free. Having sailed into Pia’s Caleta Beaulieu one very windy day, in order to hide from a nasty gale – and having sat it out with the south-westerly wind bouncing off the cliffs opposite – we awoke the following morning to find the boat surrounded by ice.

No worries; we had a three-month supply of food aboard and plenty of fuel for the stove. 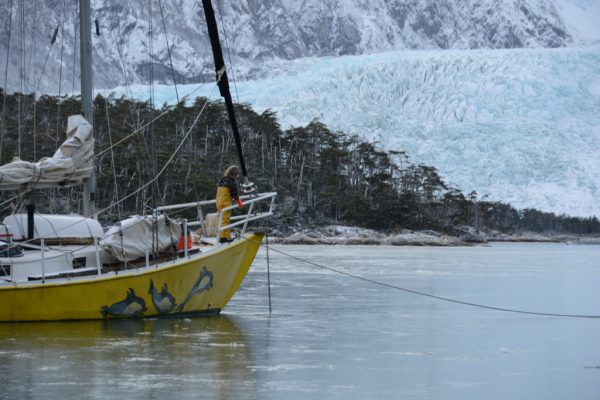 In the event the ice was only about a centimetre thick, so that we could easily ‘break out’ and continue on our way – but first we had to untangle ourselves.

Yachting in a winter wonderland is certainly rather demanding. The cold is really a bit of a bore… 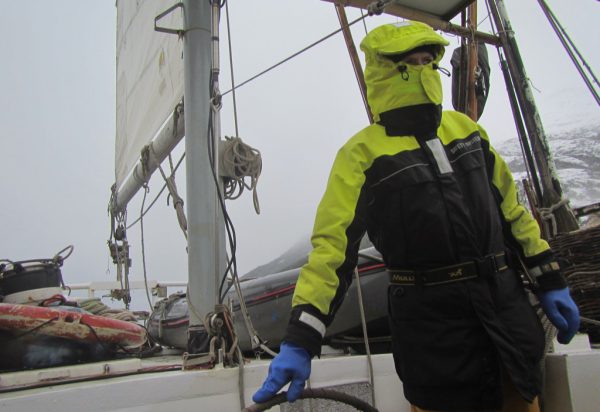 … but there: you can’t have warm weather and glaciers – so, in view of the way things are going, we’d better make the most of the ice while it’s still around.

In Part II of this series we continue westward into Whaleboat Sound and learn of the exploits of the early adventurers in that region.