The ripples from the dinghy’s bow shot ahead of her across the calm water, as she was pushed forward by Daddy’s powerful stroke. I crouched in the bow next to Poppy and called out to the others. Xoë waved back. 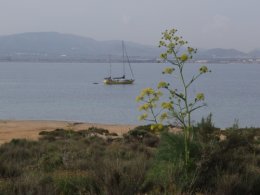 As we got closer Poppy braced herself for the jump, and then just before we arrived she leapt from the boat onto the shore,  soaking her hind legs with salty water.
We all laughed.
The dinghy touched the beach with a gentle scrunch, and I jumped out onto the sand, as eagerly as the dog, splashing my ankles with the cool water and jumpeing onto the beach.. After Mummy and Daddy had clambered out, Caesar and Xoë pulled the boat up onto the beach next to their Topper.

It was Mummy’s birthday and we had spent the morning at the northern end of the Mar Menor, watching a spectacular airshow. Then my brother and sister had set off in their little sailing dinghy, bound for Isla Perdiguera. Caesar was fifteen; Xoë  was thirteen. I was only eight, so I was not allowed to sail far away with them in the Topper. I had to stay with Mummy and Daddy on the yacht. The Topper had set of first so it had reached the island first, ahead of our yacht. 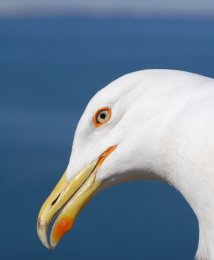 “There are chicks at the top of the big hill, Xoë babbled, in a hurry to be the first one to tell of the discovery.
I looked up at the hill. Like the rest of the island it was dry and dusty, covered in dried branches and bushes, dead and brown.
“They’re ever so fluffy,” my sister went on, “And I think they’re gulls. Let’s bring one home as a pet – do let’s! You’ll let us, won’t you, Mummy?”
“No.” 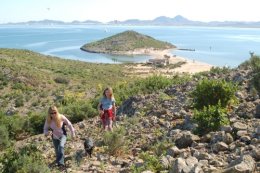 We ran up the hill, tripping on the rocks and stones and sending them bouncing down into the bushes below. My parents walked after us, Mummy all the while taking photos and telling us not to scare the birds off their nests – and saying, over and over to Xoë, “No. You definitely can’t have a chick.”
Poppy pulled at the lead, excited by our running and by the screams of the seagulls above us. 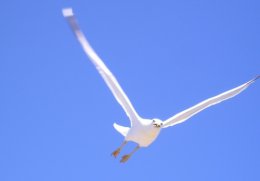 As we got higher up the hill the gulls mobbed us, trying to scare us away from their nests and their young. Then we found the chicks. Not really chicks at all, but immature birds near to fledging.
Mummy took photos of the gulls, the chicks, the flowers, the sea, and everything else in sight. She kept wanting us to pose near a nest, or hold a branch out of the way, and all the while she kept saying to Xoë that she could not have a chick. And Xoë kept on pleading, “Just a little one. Only a baby.” 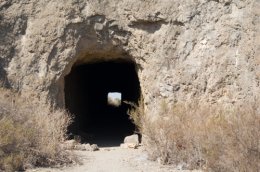 At last we got to the top of the hill. We could see all over the whole island and the edges of the Mar Menor were visible in a big circle around us. The breeze refreshed us after our hot climb, and we plunged down the other side of the hill, slipping on the clattering rocks and scratching ourselves on the bushes. Then we went up the next hill. In the side of this one we found a cool dark cave. There was a pin prick of light at the other end.
“It’s a tunnel! It goes right through the island!”
We passed through the tunnel. And, at last, having explored everywhere, we went back, past the hills and the bushes, past some old war time ruins, to our dinghy hauled up on the beach., 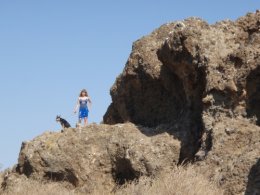 That first visit to La Perdiguera was almost three years ago. Since then we have visited it almost every birthday and at Christmas, and whenever we fell like it. We have come here in winter and found everything surprisingly green and well-watered, and we have come here many times in the summer and found everything dead again.
Everytime we come to Perdiguera we find something new. A seagull’s feathers; a snake skin; a cicada grub’s carapace. A huge pen shell, washed up on the beach; an old warbler’s nest; a kestrel’s skull; a mantis’s ootheca. We always find something interesting. It is a wonderful place for me, as I love wildlife and we always find something new to add to my collection. Sometimes we find something living. Once it was a rabbit which we found hanging from its back leg in a thorn bush. We rescued it, but its leg was injured, so we hid it in a bush with plenty of cabbage leaves. By the next day the leaves were gone and so was the rabbit. It must have got better. 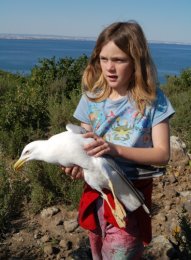 Another time we found a seagull which was sick, and we brought it back to the yacht and fed it. Another time we were walking along the beach when dinner washed up at our feet, in the form of a huge, live mullet! It had been thrown ashore by a motor boat’s wash.

We haven’t yet got our seagull chick… but Spring is here and the gulls are laying their eggs again. Maybe one day soon we will find a poor little abandoned chick… Sshhh! Don’t let Mumy hear!