It was on March 3rd that we finally left the marina. Not for the absolute, last time ever – because it’s the only safe place to leave the boat when we need to go into Cartagena – but for the last time as fee paying members of the La Manga community. We have relinquished the berth which was our home for the previous three years, and we won’t be going back to that lifestyle. 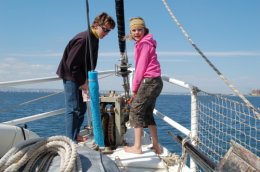 Hanging out in a marina is a half and half sort of a way of life. One is neither fish nor fowl; neither seafarer nor land-lubber. It’s a lifestyle which entails all the disadvantages of being on a boat, and almost none of the benefits. You endure ridiculously cramped conditions, without the facilities of running water, a washing machine, a bathroom, and constant internet access, and yet you don’t even get to wake up in the middle of an ocean or off a secluded sandy isle. Casting off the lines for the last time was a moment for celebration -but we are saving ourselves for the day when we pass out under the bridge and say adios to the Mar Menor. In the meantime… this puddle is our cruising ground. 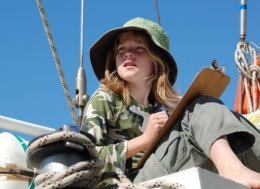 The crew have expressed mixed reactions to the new arrangements. The Ship’s Naturalist is thrilled to bits. Roxanne is the sort of person who is always happy wherever she is, and who can always find something interesting to do. As regular readers and friends will know, she used to spend a great deal of each day grovelling on the waste ground around the marina, looking for insects. She now spends part of each day standing on the pulpit, or climbing in the rigging, muttering things like “Avast, there” and “Tighten the main braces”. She has placed herself in charge of the anchor, and whenever we move, it is she who grinds away at the winch and brings the hook aboard. 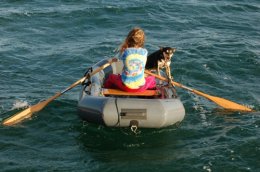 The Admiral and the Ship’s Captain are also very relieved to have reverted to something approaching the cruising lifestyle, but the Ship’s Dog is less than delighted; she now spends a great deal of each day gazing longingly at the shore.
“Poop on the poop, Poppy!” we cry – but she won’t; she insists on waiting. Perhaps she recalls the time, long, long ago, when she was a Bad Dirty Dog. The rules have changed; the deck is no longer sacrosanct; but Poppy-Dog can’t quite believe it.

As for the Ship’s Cat, he has been dropped from the payroll. Travelling with a cat must be misery, both for the cat and his owner.; the cat will be forever wanting to go ashore, and the owner will be forever trying to find him again. It was Roxanne who made the decision to leave Truco in his familiar surroundings, in the care of a cat-loving friend. She has written a little eulogy in his honour, and we will type it up and publish it – just as soon as she remembers where it is. 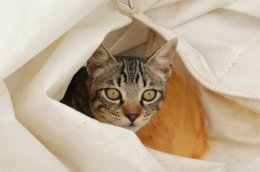 The Dot-Com Officer, having scarcely left his cabin, might not even be aware of our departure from the marina… except for the fact that his wifi internet connection has gone down the tube. Letting go the warps was easy, but casting off this virtual tie has been hard, because Caesar and Xoë both rely quite heavily on the e-mail facility for regular contact with their tutors.
Surely there must be a system which enables one to surf the net whilst also skimming over the high seas? Surely there must be some sort of satellite phone system? There is such a system – but it costs the earth. I will be writing more on this subject in the future. 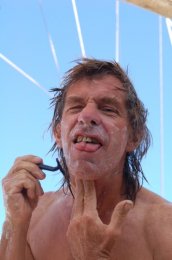 We also lack a bathroom door. This does not matter much, from the stand-point of safety and seaworthiness. Indeed, it does not matter much from any point of view. Even Xoë can live without a bathroom door. What she would like, however, is a bathroom which is equipped with some of the amenities usual to a place carrying that name. Our bathroom is without a sink, without a shower, and without running water. When we lived alongside a jetty we had the use of a well-maintained washroom, but under the new arrangements washing takes place al fresco, in the cockpit. That’s the way it always used to be, for all the years that Mollymawk was underway, but Madam was smaller then and knew no better. Now, she has seen Gran-ma and Gran-pa’s deluxe bathroom, with its flushing loo, and its light switch, and its running hot and cold. The cockpit is draughty. Oh, and did I mention the water restriction? Half a bucket per person is the ration.
“And think youself lucky, Xoë! The men in the Japanese prisoner of war camps used to get just one cup of water each per day. First they used it to clean their teeth; then they shaved; then they washed, and then they drank it. Think yourself lucky; you don’t even have to shave!”
“No, but I have to wash my dog.”

It was while Xoë was performing her ablutions in the cockpit that a Most Exciting Event occured. 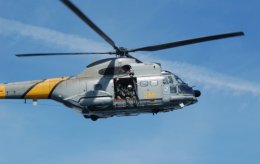 We were anchored, in perfect seclusion, off Isla Perdiguera when a chopper came rattling past. We see a lot of choppers in the Mar Menor, together with lots of jets and other military aircraft. On the eastern shore of the lagoon there is a military air base and this is the pilots’ routine stomping ground. We watched as the helicopter headed off towards La Manga, but before it reached the sand strip, it stopped and lowered itself down to the water. Having very nearly kissed its reflection it dropped two objects into the sea.
“Fetch the glasses, Rox.”
The chopper was about half a mile away, but through the glasses we could see that the objects floating in the water were men.
“Ooh! Do you think they’ve done them in!”

Now the chopper came hurtling straight towards us. We were the only occupants of the Mar Menor, on this calm, sunny, weekday morning, and the pilot wanted to be sure that he had our attention. He performed a steep turn around our masts. His crew were waving enthusiastically from the door. We waved back with equal vigour, and then the little grey machine clattered back towards the bodies, still bobbing about in the chilly water. In due course the two men were hoisted back aboard, both at the same time.
“Well, that was pretty good!” said Your Correspondent.
But that was nada. 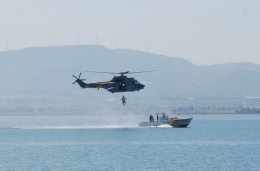 While the rescue was taking place a small patrol vessel had gone chundering past the anchorage, and the helicopter now proceeded to fly along about thirty feet above this boat. The boat was not actually foaming along at top speed, but she was making at least ten knots. We imagined that one craft might be filming the other, but then, as we watched, a line was lowered down from the chopper and fastened to the boat. The line was made taut and two men descended, in each other’s arms. This is the first time that we have ever watched a high speed “high line” transfer. Indeed, we had no idea that the manouevre was ever performed underway. 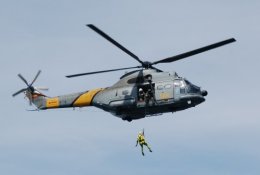 Having recovered her crew, by the same perilous method, the chopper moved off. We assumed that the show was now over – but someone aboard the aircraft had evidently noticed our enthusiasm. Xoë had hardly resumed washing her hair when the guys were back again. For their encore they performed a second Practice Rescue some 300 yards off the stern of our boat. And then they did another; this time they were so close that Mollymawk was only just outside the dark, turbulent pool created by their downwash, and we could hardly hear ourselves speak. The only time we have ever been closer to an SAR chopper was when we, ourselves, were the casualties being hoisted aboard.

Naturally, we were thrilled to bits with this private performance of state of the art chopper pilotage, but there were also a couple of things which we found amusing. The first was the fact that the man in the water had a pair of binoculars. We were a little bit startled to find, while we peered at him, that he was peering back at us! Equally entertaining was this same fellow’s habit of giving directions. While the chopper hovered over him he kept waving his arms or beckoning to tell the pilot which way to go! At first we were surprised that the pilot should need this sort of assistance… but then we recalled the behaviour of the Spanish yotties in the marina. While a boat is manoeuvring in or out of her berth the entire crew shout directions, and the helmsman ignores them all. And everybody is perfectly happy. Seemingly, the Spanish airforce is run along the same lines.

Having hauled her man aboard for the fourth time the chopper circled us again, to receive our applause, and then away she clattered, back to San Javier and lunch and the siesta. Xoë took up the shampoo bottle once more.
“There,” said her father. “People who live in houses don’t get that sort of a treat, do they? How many houses do you know of where you can sit in the bathroom and watch an air-sea rescue?”
Madam raised her eyebrows – and her voice: “How many houses do you know of where a girl can’t even have a shower without a bunch of men turning up to gawp!”