During the past couple of years Mollymawk has been based in the Mar Menor. It’s not the most attractive or exciting place in the world, but the Ship’s Naturalist has found plenty here to interest her. In this three part series she begins by telling us about the life which lurks in the water.

Well, here I am, paper and pencil in hand, ready to tell you all about life in the Mar Menor.

The Mar Menor is an inland sea, near Cartagena, in Southern Spain. It is surrounded by beaches and tower blocks, and divided from the Mediterranean by a thin, sandy strip called La Manga. There is only one way where boats can get from the Mediterranean into the Mar Menor, and we are living in it. There is not much wildlife in the Mar Menor. There are no mammals here, except people and their dogs. So instead we will poke our heads in the water. But there doesn’t appear to be much there. The biggest reason is there isn’t – in the marina. But even in the oily mucky water in the corner of the marina I was surprised to find there were still some animals.

The first animal I saw was, of course, the fish. Shoals of fish, usually mullet, spend their time weaving in and out between the motor boats in numbers of about two to ten. I used to think the tiny bright blue fish were a different species, but it’s clear they’re the bigger one’s young. Very early in the year I see shoals of two to ten tiny, bright blue specks. They gradually, in a week or so, get big enough to be recognised as tiny fish. Then I started seeing little miniature fish, looking just like their parents, but only about 4 cm long. After that I suddenly started seeing young adults, and then the adults themselves, (about 20 cm long). The mullet suck the weed on our boat but they don’t do a very good job of cleaning it! 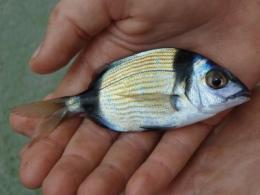 I also noticed, close to the quay, there lurked a little flattish fish, with a black spot on their tails. I looked them up and found oblandas, or saddled bream in English. There are also fish with two black spots called mojarra or two-banded sea bream, and fish with thin yellow stripes called salpa in Spanish or salema in English. I once caught a cuttlefish in my net, and I very rarely catch a thing that Mummy calls a pipefish, but it’s actually a garfish (aguja). It’s long and thin and it stays near the surface, but it swims very fast. 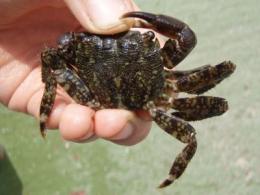 The next animals I saw were the crabs. Mottled black and green, they crouch in the cracks in the jetty, grabbing at anything – a string, some bread, but never, to my annoyance, catching or eating anything in my presence. Recently I found a spider crab.

Last summer there were lots of jellyfish in the Mar Menor. We found four types – purple, brown, white, and brown. The purple and brown came first in the year, bringing with them a mild sting which often itched me as I caught them to draw and look at. They were both the same shape as each other, long tentacles, and a star shape in its bell. Some people say the males are purple and the females brown. Humph. I don’t know if the jellies are male and female, or hermaphrodite. This lot of jellies didn’t come this year, so we’ll skip straight to Rhizostoma pulmo, known here as aguamala, or bad water. I call this the rice pudding. It’s a white pudding bowl with a frilled edge which is a deep, dark, purple. The rest of this stingy cnidarian is white, with a tint of blue. The English name is supposed to be “Shiffarms jelly fish”. 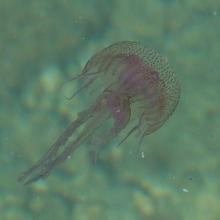 Lastly, and latest in the year, comes the cow pat. This is what I named it. The other names it collected during the summer were cauliflower and custard pudding The Spanish call it huevos fritos, which means fried egg. It is actually called Cotylhoriza tuberculata, or Aguacaujada (Curd water). This jelly doesn’t sting at all, unlike Aguamala. Often, last year, when I was swimming last or when Caesar was windsurfing, we found ourselves in huge groups of them. Terrifying as they appear, they are quite harmless, and in fact, good enough to play to under water foot ball with, and for Xoë to use as an underwater punch bag, while I dived down and attempted to restrain her. (And failed.) This year there have not been many jellyfish.

Once when I was trying to catch a fish – a darting risky little animal – I shoved the net under a boat. The fish flicked away at the last moment, and I pulled up the net and saw that it was full of shrimps! Obviously, the shrimps had been hiding in the weed. I spent the morning studying them. Some had eggs. After catching the shrimps while chasing fish in the morning, that afternoon I caught the little fish while chasing the shrimps! 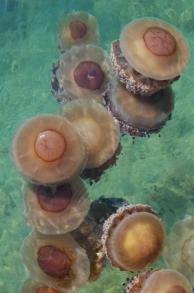 I also found there was plenty of life on the crowded sun parched beach nearby. If you swim along with your head under the water you can see the sea cucumbers (Holothuria sp.) dully rolling about on the bottom. The first time I found a pepino de Mar was when I found one stranded on a beach. I soon saw them on the bottom when we were out at anchor, and dived down to look at them. The nearest thing they resemble is a turd, and for this reason the rest of the family don’t touch them, because they look ‘’ squidgy and turdish”.

There are also fish at the beach. The little silver bream and some that live on the bottom and are camouflaged. They’re gobies, I think, but Mummy’s scared that they might be stonefish or weevers. 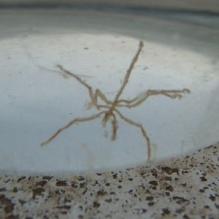 There are starfish in the Mediterranean but in the Mar Menor I’ve only seen tiny baby brittle stars. Last summer I found nudibranchs but this year I haven’t found any. My latest discovery is a sea spider. It’s not really a spider but it does have 8 legs. It reminds me of a ballet dancer or a clown dancing. It flops about all the time. Mummy read a book which says that its reproductive organs and its stomach are in its legs!

So now you know just how much life there is. I suppose it’s not much, compared to all the boars and bats, bears and bee-eaters, and grouse and griffon that live in the middle of Spain, in the mountains, but there’s more than one expects at a glance. And I have managed, without thinking, to write six pages. It will shrink depressingly whilst I type it up, but there’s life for you.

By the way, do any of you know why fish swim up and breathe air? Is it because the water’s dirty? Or is it because they’re eating something that I can’t see that’s on the surface?