In the second instalment of her wildlife series, Roxanne introduces us to her feathered friends.

Well, here I am, fully preened, and ready to tell you all about bird life in La Manga.

I suppose you understand that there are no great golden eagles or griffon vultures here? No birds of prey at all, in fact. This may seem dull, for those of you who live in the mountains of Spain and who are used to strolling through clouds of harriers and hawks. There is are actually a pair of peregrines which live on Isla Grosa, but that’s just outside the Mar Menor… and anyway, I’ve never seen them. 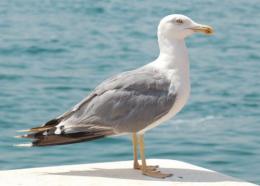 The most noticeable bird in the marina is the yellow footed gull, Larus cachinnans. Screaming, flapping, flying – they dominate the whole marina, and, with their smart grey coats and yellow legs, they remind one of business men going off to work. They are so common everyone has learned not to pay the slightest attention, which is a pity, as they’re rather smart.

The commonest birds here are probably the sparrows. They fly in flocks around the marina, pecking at bread crumbs and clinging to rigging, to the great annoyance of the dog. They also steal the food meant for the wagtail. 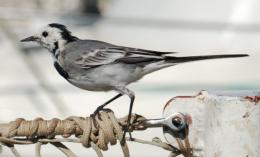 For the whole winter we often have a little white wagtail, feeding on the suet I leave out for him. He’s called a white wagtail in the books, but actually he looks just like the usual pied wagtail except that his back is grey. In the summer he flies off to catch insects instead of eating our suet. Last winter he stayed so long he got very tame and he nearly landed ON you, but he flew off for summer.

In the winter there are also a few black redstarts, which think that the tower blocks are cliffs, I suppose.

Last summer the marina was filled with terns. The commonest tern is actually the common tern (sterna hirundo), but there are also little terns (Sterna albifrons), and in summer the marina is filled with the sharp “Teeeeeek! Teeeeeeeeeeeeek!”! and the sudden “ Splash!” of a tern catching a meal. Last year I rescued a common tern which had got hurt on a mooring line. We took it to a rescue centre in Murcia, but it died because it couldn’t fly so it was unhappy. There haven’t been nearly so many terns this summer. This is probably because there haven’t been nearly so many fish, either. 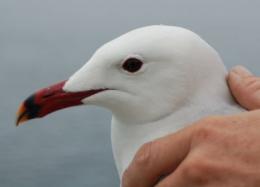 The special bird of the area is the Audouins gull, Larus audouinii. This bird is rare, and this is one of its only breeding places. It has green feet and a red beak, and is smaller than old “yellow-socks”. However, there’s a catch. Any small, timid gulls, among large, loud yellow-feet are asking for trouble. The best nesting places are taken, the best food caught, and to crown it all, chicks make a tasty lunch for the yellow-feet! I feel rather sorry for our yellow-feet, with everybody piercing their eggs and chasing them off! It’s not exactly their fault. They have to eat. The Audouins are only here in the summer. They come to breed, and then they go back to Africa. They all disappeared, about a month ago, in a northerly gale.

Besides this there are land birds. There are the timid crested larks with their lovely song. And on the islands in the middle of the Mar Menor there are a few determined blackbirds and robins. There are also goldfinches. Mummy saw a few greenfinches on Isla Perdiguera, but probably only migrating. We found out that perdiguera means “a place where partridges breed” but there aren’t any there now. There are loads of swifts nesting in the tunnel that goes through the hill, and two chattery land birds – one the sardinian warbler and one the blackcap.

There are quite a few waders on the island but we’re not very good at identifying them, except the ringed plovers and turnstones. You can get very, very close to the turnstones if you’re in a canoe. We saw a wader the other day that Mummy thinks was a golden plover. It had a black face and tummy with a white edge, and a brownish back. Sometimes there is a little white egret with nice yellow toes.

Once we saw a kingfisher on the island and several have been seen recently in the canal, where we live. 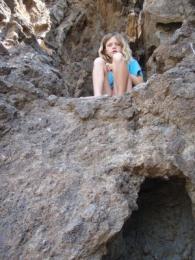 It was on this isla that I found the only bird of prey in the area – a kestrel. But a kestrel no longer. By the time I found him all that remained of him were a few feathers and his skull. However I suppose there could be others. I found a sort of nest like ledge, and some pellets containing fur and bones. An owl’s roost, perhaps?

But there are also birds in La Manga, believe it or not. Most are just migrating, like the shrike we saw. He and his wife were woodchat shrikes (Lanius senator). They were around for about a week. They eat insects and lizards. Sometimes they even eat other, smaller birds!

We also, last summer, saw some hoopoes. We saw them for a week or so before they left. They were just passing through. They haven’t been again. La Manga is obviously too noisy and crowded to even pass through any more! There are also warblers that pass through and Mummy thinks she saw a nightingale in the spring. Funny place for a nightingale!

Here comes the last, but the best of the lot. Our highly prized stone curlew, or alcaravan (Burhinus oedicnemus), which is very rare in Britain. The number of stone curlews left in Britain range from 100 to 80 or less, depending which book, person, or web site you ask. They aren’t so rare in Spain, but they’re still special because they are lovely birds, with huge orange eyes, and even huger yellow rings round them. From the long yellow legs, they look like a wader, but they really eat insects. They run along the ground very fast and smoothly as if they were on wheels. They make a lovely curlew like sound too. (The experts have now renamed the stone curlew, and it is now called thick-knees! I think that the person who did this renaming must be a thick-head!) 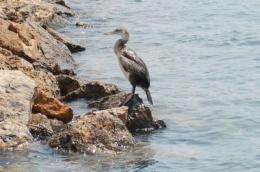 If you go to the saltpans at either end of the Mar Menor you can sometimes see other birds, such as flamingoes, herons, stilts, and avocets. The first time I saw avocets I was very disappointed. I’d seen photos of them and I was expecting them to be as big as geese! We don’t often go to the saltpans, and when we do we always see lots of waders that we can’t identify.

So there’s brief introduction to the bird life of La Manga and the Mar Menor. I hope you liked it.

By the way, don’t any of you lot start thinking I know Latin, when I start spouting it by the mile. I hardly know anything about it, and my vocabulary stops abruptly at “Larus” (gull) and “ Bubo bubo “ (Eagle owl). But Daddy can proudly recite “A table, her table, his table, Oh table!”.