See the previous articles in this series: Part I – Wishing You a Green Christmas and Part II – Confessions of a Vegetarian.

People are funny about meat eating. Six year olds are not the only ones to find the sight of a pig’s head upsetting, and yet those same people who cry, “Yuk! how could they do that?” will happily tuck into pork pie.

Just recently I was shopping with a French friend in a Brazilian market when we came upon a meat stall decorated with the head of a recently deceased bull.
“Eurch!” said my friend. “I’m not shopping there!” And she turned-tail and bought her beef in the supermarket instead.

Strange to say, I didn’t find the sight of that bull’s head at all disturbing; or at any rate, it was less disturbing than the sight of all that pink, quartered flesh. If people will eat meat then, obviously, there will be killing.
For me the bull’s head was just part of the colour of this chaotic market scene, but for my carnivorous friend it was an accusation. She did not wish to be reminded that in order to satisfy her hunger for meat she was obliged to kill.

Another French friend – more aware than most of the irony of her attitudes – told me a story about the time when she and her husband went shopping in a village in Dakar. They wanted some meat for their supper and eventually someone offered to sell them some goat.
“Which joints do you have,” they asked the vendor.
“Well, which joint do you want?”
Our friends named the cut which they preferred to buy, and the man promptly grabbed a pretty little kid which had been ambling about nearby and, almost before they knew what he was doing, he had slit its throat.
“Oh, no! Stop!” cried our friends. “We didn’t mean for you to kill anything!”

What a strange world we live in.

But let us leave ethics and squeamishness out of the picture.
Let’s ignore the fact that most of the animals raised for the table live short and very unpleasant lives in over-crowded prisons.
Animals were born to die. Indeed, we were all born to die… but with the exception of ourselves and our pets, most forms of life end their days in the jaws of another, fitter, stronger beast. Death is their expectation; so, on that basis, we may as well join in and tuck in, mightn’t we?

Nature is brutal.
Killing is, quite undeniably, the most natural thing of all on this planet.
But… BUT… BUT… that doesn’t mean that modern man’s method of farming his food and feeding himself is natural.
On the contrary. Our modern method of food production is one of the most unnatural, anti-natural things ever to have occurred.

Ask not for whom the bell tolls

As we have seen, modern livestock production is having a disastrous effect on the health of the planet principally because it contributes, in a most startling manner, to our greenhouse gas emissions.
Far from being in line with nature’s way our modern farming methods, and our meat-production methods in particular, are completely at odds with the balance and harmony of Mother Earth.
The atmospheric damage caused by meat farming is so great that one could even say that modern man’s appetite for meat is threatening to destroy the entire human race.
How crazy is that!
The animal which prides himself on being so intelligent is, in reality, so dumb that he sets the fulfilment of his own personal gluttony above the survival of his own children!

The day will come…

You can recycle your glass, walk instead of driving, fit a solar water heater, and only fill the kettle with enough water for one cup of tea;  but if you’re still eating meat then you can’t really call yourself an environmentally concerned citizen.
The simple fact of the matter is that eating meat is one of the most anti-social things that you can do; worse, by far, than playing loud music or lighting a bonfire on a still summer’s evening. Worse even than driving around in a fuel-guzzling car or owning a power boat.

Society operates according to a set of rules which have been devised in order to protect the interests of the majority.
Why should anyone have the liberty to trash this planet which is home to all of us?
(Please place your well-reasoned answers in the comments box, below.)

It’s easier than you think

12 years after giving up meat, I find that I really can’t swallow it. It’s not that I’m squeamish. You can cook your pig’s liver in my frying pan, alongside my veggie burger, and I won’t turn a hair. And if someone plonks a chicken curry in front of me I’ll even give it a go. I don’t like to cause offence, and so I will try to do it justice. But after the first mouthful of tasteless rubber I’ll shuffle the rest around my plate, I’ll eat the rice and the sauce, and then I’ll nudge my neighbour and mutter “I’m stuffed. ‘ Can’t manage another mouthful. Would you like to finish it off?” 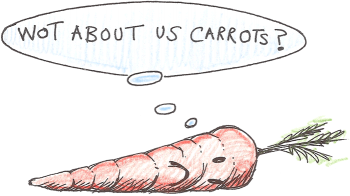 Fish and creepy crawlies (such as prawns) I’m still okay with, up to a point, – provided that they have been caught locally and by a traditional, non-intensive, environmentally-sustainable method. But red meat – and beef in particular – now turns my stomach. If I find myself sitting next to an enthusiastic beef-eater then I actually have to move away. I don’t like to say this (and I never have said it before) but beef now smells to me exactly like dog shit. So my subconscious says, “This guy is eating…”

When it comes down to it, the hardest thing about giving up meat is throwing out your repertoire of recipes and learning a new set; but the www is chock-a-block with vegetarian recipe sites, so this is really no problem at all.

Bacon is the thing that most reluctant vegetarians find the hardest to forgo. When it comes down to it, it’s the saltiness and the smokey flavour that we love; so the solution is to replace bacon with something equally flavoursome.

The key to making a vegetarian dish tasty and appealing is to use lots of spices and other natural flavourings (in the appropriate combinations). It helps if you can also add something which will provide another texture. Peanuts in the stir-fry, for instance; or black olives and feta cheese in flan.
Vegetable curries are very easy, and so too are cheesy meals such as cauliflower and brocoli cheese with a sesame seed topping.

Aboard Mollymawk we regularly have friends to supper, and most of them are meat-eaters by inclination; yet they almost always come back for second helpings of our vegetarian fare. So, you see it really isn’t that hard to enjoy a meat-free diet.

See the previous articles in this series: Part I – Wishing You a Green Christmas and Part II – Confessions of a Vegetarian.