As I write, Mollymawk is anchored off the little scenic town of Paraty, (just down from Rio de Janeiro) but on the festive day we will probably be at sea, making our way down the coast towards Uruguay. As you sit there, tucking into your turkey, we might be lazing along in the sunshine and having a lovely time… but on the other hand we might be slamming into a south-easterly gale with waves smashing into the topsides and sweeping along the deck.

One thing is for certain – wherever we are this Christmas, and whatever the weather, we certainly won’t be eating turkey. Turkeys are pretty thin on the ground in Brazil, but that isn’t the problem. There’s plenty of chicken and beef here, but we won’t be eating them either. The fact is, we can’t afford to eat any kind of meat. And, come to think of it, neither can you.

Did you know that, according to a recent survey, agriculture is the biggest single contributor to our greenhouse gas emissions? And it seems that the production of meat is responsible for a whopping 80% of those emissions!
To be precise, the farming of animals produces 18% of mankind’s carbon emissions!!
Isn’t that incredible?
That’s even more than the world’s entire transport system (which is said to be responsible for 15% of emissions); indeed, it makes meat production the biggest single source of “man-made” carbon gases in the world!!!

How can this be? We all know that cows, in particular, produce a lot of methane, but surely they don’t turn out 18% of the carbon produced by man and his machinations?
Well in fact, as it turns out, this really is a major factor. The combined farting and fouling of all the hundreds of millions of cows and sheep on the planet creates 37% of the total methane generated by human activity. And, unfortunately, methane is one of the baddest of all the bad gases, having 25 times the global-warming impact of carbon dioxide.

Cows also produce nitrous oxide – and nitrous oxide is almost 300 times as damaging to the climate as carbon dioxide! According to New Scientist magazine, 65% of the total quantity of nitrous oxide produced by human activity comes from our livestock (mostly from their manure).

On top of that, meat production uses up far more water than the production of grains and vegetables. Perhaps you think of water as an infinite and freely available resource, but actually it isn’t; not for everybody. More than one-seventh of the world’s population does not have access to clean, safe water, and despite the efforts of various organisations (including Water Aid and Raleigh International) things are getting worse. It is estimated that by the year 2025 there will be 2 billion people (two-eights of the current world population) living with “absolute water scarcity”.

Farming is said to account for the use of 70% of our freshwater, with meat farming the chief culprit. Meat farming doesn’t just use a little bit more water, or even twice as much water. It takes thousands more litres of water to produce a kilo of beef than to grow a kilo of grains, vegetables or pulses. (Estimates of the water required to produce a kilo of beef run from 13,000 litres up to 100,000 litres. The water required to produce a kilo of wheat is somewhere between 1,000-2,000 litres.)
This is because – of course – an animal has to eat a lot of grains and vegetables to get fat and juicy. Cattle require approximately 7kg of grain in order to generate 1 kg of beef, while pigs require 4kg grain to make 1 kg of pork. (Figures from the Vegetarian Society.)

Because our livestock eat so much they are also responsible for the destruction of natural habitats. If you only ever eat organically farmed meat from the place just up the road then you’re probably in the clear here, but if you like hamburgers, corned beef, or any other highly processed beef product you stand with your back to the wall – because beef production is responsible for 70% of the deforestation taking place in Amazonia.
And – as we all know – deforestation increases levels of carbon dioxide in the atmosphere, because trees “eat” carbon dioxide.

Should we be worried?

You might think that this is all a load of scare-mongering talk generated by a few rabid hug-the-trees freaks – but it’s not. The facts have got the scientists and politicians worried too. A report quoted in New Scientist magazine concludes that “food production is too close to the limits of a safe operating space”.

So, how much meat is it okay for a responsible citizen to eat, asks the magazine?

Well, I should have thought that the answer was pretty obvious… but a university in Australia has decreed that the safe limit is one small hamburger and one small chicken breast per person every two days. This, we are told, will stabilise agricultural emissions so that they don’t increase any further.

Is that good enough?
No, of course it b—– well isn’t! If we want this planet to remain habitable for our children and our grand-children then we’ve got to bring our carbon emissions DOWN!

Did you know that a vegetarian driving a big, gas-guzzling 4×4 has a smaller carbon footprint than a meat-eater riding a bicycle?

Environmentalists do not eat meat

Because of the way Western society is currently organised, giving up the car is hard . And reducing our use of plastic is not so easy either when everything in the supermarket is still wrapped in cellophane. But cutting out meat from your diet is an absolute doddle! It’s the easiest possible way of significantly reducing your own personal environmental impact. 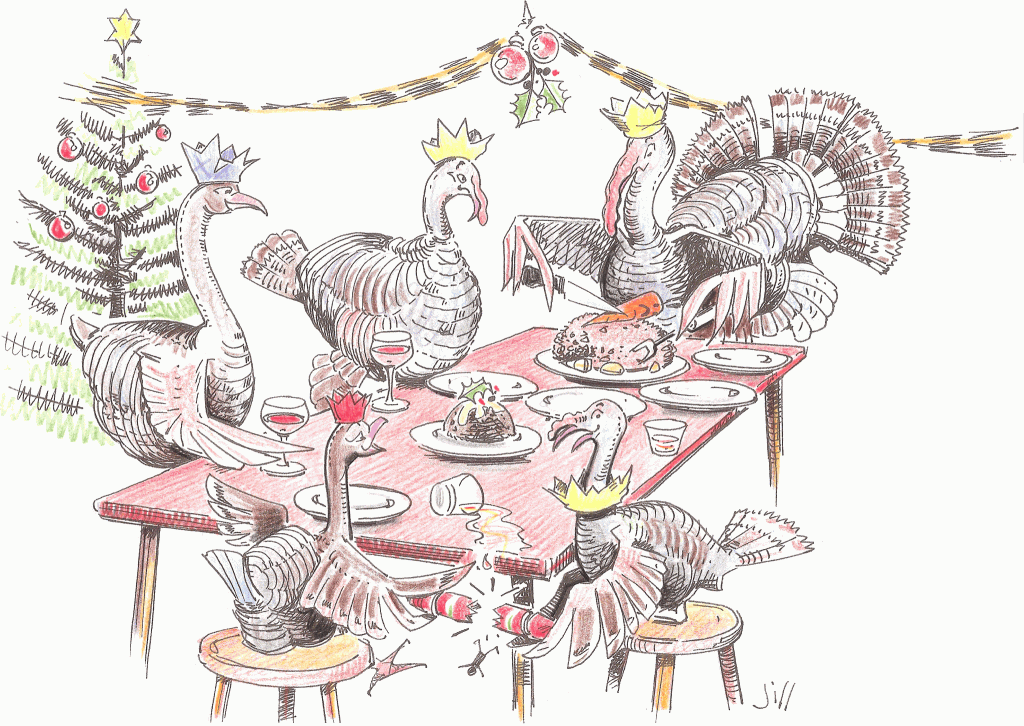 No, the production of turkeys is not one of the main greenhouse contributors… but the season of goodwill is not a bad time to begin your new resolution. If we all adopted Nut Roast as the new “traditional” festive dinner think how much carbon we would save on just that one day!

For more thoughts on meat and not eating it, check out Part II of this article – Confessions of a Vegetarian.

For more information about why meat production is bad for the environment visit the Vegetarian Society’s website and take a look at this leaflet.

Happy Christmas, one and all.