Twenty years ago one hardly ever came across a yacht which had livestock aboard, but now seadogs and ship’s cats are a common sight. Sailing chickens are still a rarity, as are toads and snakes, and we have yet to come across a parrot – although we did once meet a chap who had just lost his parrot overboard… 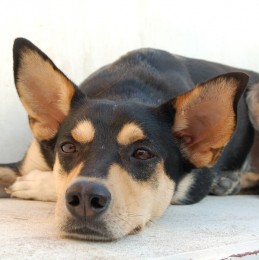 At one time there were no fewer than four doggies and one moggy in the anchorage which we last visited – indeed, there was only one yacht, at that time, which didn’t have a furry four-legged crew-member! – and when we arrived in our latest venue there were seven dogs and at least one cat that I know of. Cats tend to be less visible, so that one never really knows how many there might be around, and certainly they are less audible. With eight vigilant guard dogs, the sound of barking was almost constantly in our ears as people made their way across the anchorage passing each pooch in turn. 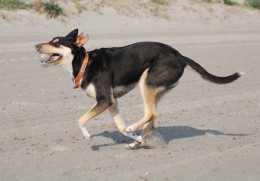 Heading our parade of salty sea dogs comes our very own Poppy. You’ve probably read about her many times before (but if you haven’t you can find her testing her lifejacket, or learning to swim, or you can meet her on the Crew List).

Poppy has never struck us as being terribly bright, but she knows every single variant of the phrase, “Are we going ashore?” and she also understands, “Whose turn is it to take the D-O-G for a W-A-L-K?” (Yes, she can even spell, it seems.) As soon as she gets wind of the fact that someone is about to take some shore leave, Our Pops gets so excited that she runs up and down the deck whining and yowling; hence our attempts at secrecy.

Poppy also knows that the sound of the chain coming aboard spells trouble. Her favourite pastime is watching the world go by and barking if it comes within ear shot. Being bounced about in a boat on the high seas is one of her pet hates. 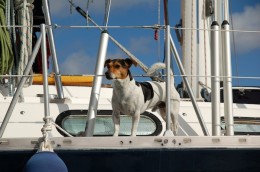 Chester is another mutt who doesn’t like sailing – to be honest, I have yet to come across a doggy who did enjoy it – but everything else about the lifestyle seems to suit him admirably. Like all sea-dogs he enjoys barking at jet skis and riding in the bow of the ship’s tender, but his favourite pastime is swimming. When we first met him he was taking his exhausted owner for a tour of the anchorage. 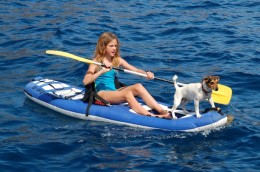 Chester’s other delight is courting the ladies, and his primary objective, when he visits Mollymawk, is to pee on both of our masts. This is a particularly rotten trick, not only because boy-dog pee stinks but because our masts are both situated next to hatches. And the hatches are usually open…
Aboard his own domain Chester pees overboard. If he could only learn to do the same thing with his other business he would be cleaner than a cat.

Chester is a darling. The least said about what he did to your cushions while you were at my birthday party the better, hey Ashley? 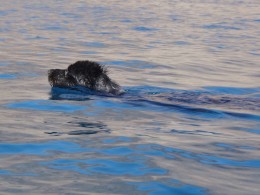 One of the best things about Chester is his size and portability. Our next guest doesn’t fit that bill. In fact, Mira is about as big as a dog can get – and she’s going to get even bigger. She’s a Newfoundland puppy. 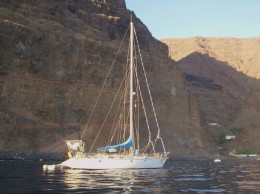 Mira sails under a French flag with a Swiss-Italian family. She has her own home on the cabin top – yes, that’s right; this sea dog actually has a kennel! – and she has her own swimming platform. Well, I guess she has to have that. Lifting Chester out of the water is simple; lifting Poppy is quite difficult; lifting Mira would be more or less impossible – and that dog does love to get wet. Her mum, Titiana, has been taking her swimming from an early age. In the winter she even used to don a wetsuit to give the dog her daily outing. Newfies are supposed to be capable of rescuing shipwrecked mariners, so perhaps Titiana hopes that the dog will prove useful in the event of a MOB. 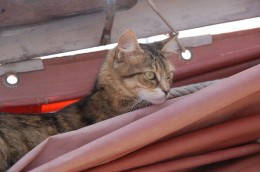 Woozle, or Bandit, as she is properly known, was born aboard and bred to the sea. Her owner, Paul Johnson, went to bed one night with his cat curled up beside him, and woke to find that he was sharing his bunk with seven furry companions. At first, he says, he thought that he must have had a little bit too much to drink on his last watch.

Woozle’s mum (also known as Woozle) was last seen padding away down the quay in the Azores, but her daughter seems happy enough with her life and lot. Her favourite pursuit is swiping the skipper’s scalp, from the awning, as he comes up the companion way. Although no more keen than her land-locked relatives on getting her fur wet, Woozle can swim and, according to Paul, having taken a tumble she climbs out again by way of the stern-hung rudder.

Mollymawk used to have a ship’s cat too. Truco was Roxanne’s pet and an amazing little character. He might have accompanied us on our sailing adventures overseas had it not become perfectly clear that he preferred the shore to the ship. Not that he minded sailing – cats never do, it seems; they just watch the foam and the waves and the antics of the crew with a look of bemused interest – but our Truco was a womaniser. Tom cats who are this way inclined never adapt to life on a tiny island. If the yacht goes alongside they disappear for days on the trot, and if the crew insist on remaining at anchor they end up in the drink. Perhaps they get so desperate that they try to swim for it. 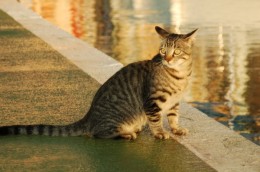 Truco now resides with a near identical moggy aboard a French yacht which is permanently moored alongside. Rox one wrote an article about him, and you can still find it in our archives. 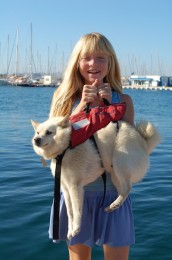 We met Molly-dog in Spain where she was serving aboard a 55ft Bruce Roberts called Inatiz. She has now been signed off, but she looks so good in her lifejacket that I had to include her. Once again we see the advantage of a portable pooch. 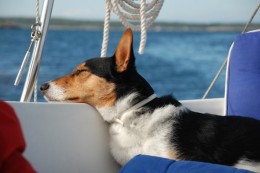 One of our readers has sent us photos of her dog, Julle. Like Poppy, he comes from a rescue centre in Spain, and he, too, is thought to be Moroccan in origin, but he now lives and sails on the west cost of Sweden. (Photo : C. Eklund)

Meanwhile, down at the other end of the planet we find Max – or, at least, we hope to, one day. Max is a yellow labrador who hails from Patagonia – and that is exactly where we plan to go, next winter. Max and his fellow crew members are another family of five living aboard a steel ketch. They have their own website, and if you can read Spanish it is well worth a visit. 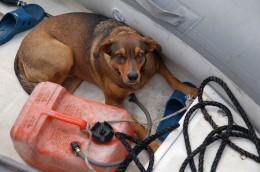 Ahrowa sails aboard a Scottish yacht called Vantage. Her skipper, Arthur, has been cruising in the Atlantic and the Caribbean for twenty years, and always with a four-legged companion. He reckons that he doesn’t have any trouble taking a dog from one island to the next. I guess we’ll learn all about that when we cross over there, in a few months time. 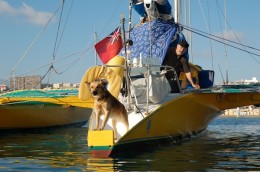 A boat is far from being the best home for a dog, of course, but given that the greatest drawback is the lack of room for running around the smaller the dog and the bigger the boat the better. The next member of our pooch parade is Bill, and although he doesn’t fit that first criteria, being of medium build, he certainly has the most romping room. His home is a huge yellow racing trimaran called Menisco Roto.

Bill is a ferocious and vociferous little youngster. He barks his warning at anything within earshot and when he saw Poppy-dog, daintly perched in the bow of our dinghy, he went beserk. Not that he wanted to make war with her; but the lad is just a street ruffian from Venzuela and he hasn’t yet learnt how to speak nicely to a lady. 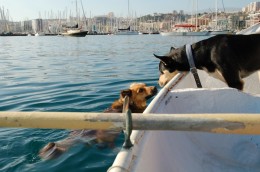 Eventually, after Poppy had disdainfully ignored his chat up lines for several minutes, the ardent suitor threw himself into the sea and came rushing to get her. Fortunately, he couldn’t find a way to get aboard our dinghy.
According to her captain, when the trimaran is underway and skimming across the ocean at high speed, Bill has to be tethered. Otherwise he might hop over the side and never be seen again. At least we don’t have to worry that Poppy will ever do that!