The Ship’s Naturalist is a kind-hearted girl who wouldn’t hurt a fly. She might catch it and feed it to a toad, of course, but she wouldn’t swat one. Nor does she eat dead pigs, cows, rabbits, sheep, or chickens – but she does have a weakness: she loves fish. At the age of four, when asked to make a list of her favourite things, Roxanne wrote, “Fish, Mummy, Chocolate.” Over the course of the past eight years the list has changed. Mummy has slipped down. But fish are still somewhere near the top. Even so – even whilst hunting for our dinner – Roxanne still finds the time to study the behaviour and lifestyle of her intended victims. 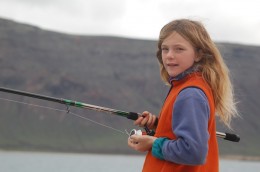 The sea around Isla Gomera is full of fish. There are not as many as there ought to be, because there are too many people catching them. Every morning at dawn the little local boats go out and at midday they come back full of fat, slippery, silver tuna, or moray eels, or a mixed catch of other fish. A friend who is a diver told us that in the nature reserve behind El Hierro, where no one has been allowed to fish for twenty years, you can be absolutely surrounded by huge shoals of all kinds of fish. Well, it is not like that at all in Gomera, but if you look carefully you can still find fish. The bay at Valle Gran Rey has a sandy bottom but even this seemingly empty and dull stretch of sand is inhabited. 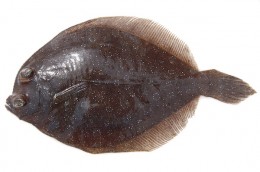 The wide-eyed flounder make this sandy bottom their home. The adults are perfectly flat with both their eyes on one side and their fins around the edge of their body, like a frill. They have adapted perfectly to the bottom and are a textured grey – like the sand. You really cannot see them – until they are so unwise as to move. 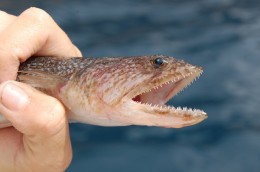 Lizard fish are no less well disguised. They lie on the bottom looking like a pile of sand. Sometimes they even bury their tail and body, so that just the head peeps out. Like the wide-eyed flounder they are fierce hunters lying in ambush, and their huge jaws are ready to snap shut on anything which comes their way. Sometimes, when I am fishing, a small fish comes and bites my hook, and a big lizaard fish comes along and swallows the smaller one, hook and all. 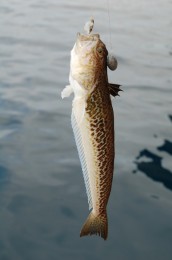 Weever fish are sturdy, adaptable and, frankly, extremely unintelligent fish. To make up for their stupidity they have a dangerous way of protecting themselves. On their back is a row of three spines with enough poison to kill a child. To avoid injury it is best to learn to recognise this fish and to try to stop it from taking the bait. This is not very easy, because the weevers are determined to grab hold of everything that moves. Weever fish can live anywhere from one metre deep down to 311 metres. They live amongst rocks as well as on sandy bottoms, and standing on them is one of the biggest dangers. When I catch weever fish I use them for bait. You should not eat them as the poison is still dangerous when it is cooked. 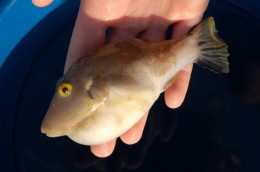 Another fish which tries to take my hook are the puffer fishes. They are poisonous too, but I would not want to eat them anyway as they are so lovely. One kind of puffer is covered in bright blue spots. It has no scales. If I catch one, and I have to lift him out of the water to get the hook out of his mouth, then he croaks. He is called a sharpnosed puffer, or gallinita. He is not very good at puffing himself into a ball. 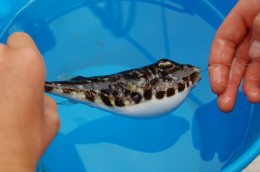 The other kind that insists on taking my hook is the tamboril, or Guinean puffer. Once I caught one which had a huge sea louse attached to its tail. It was so big that it would have been like me walking aound with a big cat clinging to my legs all day! I suppose it was sucking blood from the poor fish. We had a lot of trouble persuading the louse to let go, but after we had got rid of it and removed the hook we put the fish back into the sea and after looking a bit dazed for a while he puffed himself up beautifully. He does this by gulping in air, croaking all the time. He has to get it all out again before he can dive.

There are also other kinds of puffer fish which live around Gomera, but I have never seen them. Although there are lots of puffers in Valle Gran Rey some of the species are endangered. Although the Japanese are the only people who eat puffer fish, people catch them to turn them into lamp shades…! So, if you see one in a souvenir shop, please don’t buy it.

The pearly razor fish also lives on the sandy bottom below our boat. It is brightly coloured and it has no scales. It has two long fangs on its upper jaw, but it is harmless. I call it by its Spanish name, pejepene.

A far less common sight is the striped red mullet. It is more like a cat fish than anything else. It has two long whiskers under its chin for stirring up the sand and finding its food. Other fish follow along behind it hoping for scraps that it has dug up.

When we first swam at Valle Gran Rey we saw lots of tiny black things swaying around on the seabed. At first we thought it was weed – except Mummy, who thought it was tiny snakes wriggling along the bottom – then I looked them up in my book. They are actually little eels poking up from holes in the ground! When you dive down to look at them they all disappear back into their holes, but if they are left alone they stick their body out and sway to and fro in the current, snatching up plankton and rotting pieces of animals and plants. They are called brown garden eels.

Another kind of eel also lives on sandy bottoms. He is the Band-Toothed Conger. Unlike other conger eels he is tiny and he is almost transparent. Instead of living in the same hole all of his life he digs a new one to hide in every day. He lies in the hole with his head sticking out of the sand. This is the only time that we have ever seen him. At night he comes out of the hole and goes hunting. 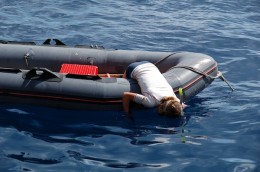 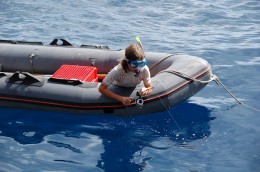 Although I would usually expect to see them only amongst the rocks, octopuses also seem to like sandy bottoms. I have seen them often, at Valle Gran Rey, hiding under people’s anchors. I once found one which was just sitting in the middle of the sand, with no hiding place at all. I was with some French friends and when I told them about it they all swam down. One of the girls was wearing a bright yellow snorkel, and she came up shrieking. Octopuses like brightly coloured things, and the fierce hunter had grabbed her snorkel!

Octopuses are very interesting creatures. I have read that the mother doesn’t eat after she has mated. She spends her whole time guarding the eggs (of which there are 120,000 – 400,000) and after guarding them for up to two months she usually dies. However, it is said that she doesn’t die of hunger. She is just programmed to die. Even the male only lives for a few months after mating, although if he doesn’t mate he can live for up to five years.

Octopuses have three hearts and no skeleton. According to the wikipedia article, “Octopuses often break out of their aquariums and sometimes into others in search of food.” (I used to have a slug which did that.) “They have even boarded fishing boats and opened holds to eat crabs.” 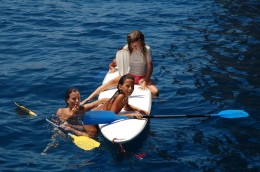 Wikipedia also says that in the UK octopuses and other cephalopods, such as cuttlefish, are regarded as “honorary vertebrates under the Animals (Scientific Procedures) Act 1986 and other cruelty to animals legislation.” This is because they feel pain and fear in the way that we do.

When I swam down to retrieve the snorkel I found the octopus sitting with his eight arms tightly wrapped around the tube, and he continued clinging to it while I grabbed the other end and carried it back up to the surface. My friends wanted to eat the octopus – they even eat the weever fish, although you can get very ill if you don’t remove the poison glands properly – but I don’t really like to hurt octopuses as they are supposed to be as intelligent as dogs, so I made them let it go.