If you visit the local tourist office then they’ll tell you that Valle Gran Rey was named after the Big King who once lived in this valley – but we know better. We reckon it was named by a Frenchman who was seriously impressed with the local sealife. 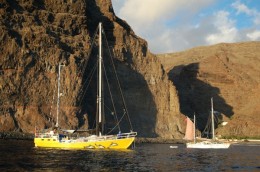 I first heard about the rays while we were anchored in Valle Gran Rey, in the Canary Islands. There was a rumour going around the cruising boats. Apparently a huge ray lived in the harbour. One of our friends claimed to have seen it when he was going ashore in his dinghy. Then a French friend, who was diving with his spear, turned around to find a ray just behind him!

A few months later we arrived back in Valle Gran Rey, and this time it was Daddy who saw the rays. He went ashore quite early one morning and came back telling us that he seen the rays being fed!
“I think they probably do it every day,” he said. “They dangle a bit of fish in the water and the rays come and climb up the steps to get it, just like a dog.”
Daddy is a terrible one for exaggerating, but the next morning Mummy and I went ashore in the canoe to see if it was true – and it more or less was. 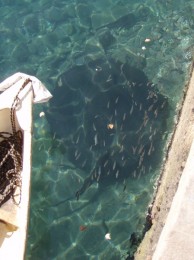 The fishermen appeared from their boats lugging a crate of freshly caught mackerel, and they broke one open and dangled it in the water. Immediately a ray appeared. He was huge and he was black. I later found out that he was a Chucho Negro, or Round Stingray. He was as wide as my arms can reach, or even wider.
As the fishermen moved the fish around in the water the ray followed it, until they moved it out of the water and up the steps – and the ray really did try to climb up after it! 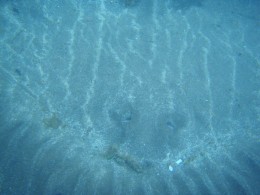 After we had watched the ray being fed for half an hour or so we began to take a little bit of interest in something else. Peering down into the water to catch a glimpse of the big black ray we noticed that the sandy bottom was covered in the shapes of rays.
“I think they must be the marks left behind where the rays have been lying,” said Mummy.
I didn’t agree. “But look!” I said. “The shapes have got eyes!”
Sure enough, all the ray shapes were looking up at us with weird spooky white eyes, which blinked.
“But they can’t all be rays,” said Mummy. “There are dozens of them! Look; these two are even over-lapping. And their pattern is exactly the same as the rest of the seabed. How would they do that? How would they cover themselves with ripples of sand?”
“Well there’s one way to find out,” she added. “Lower you paddle gently and we’ll see what happens when you touch it.” 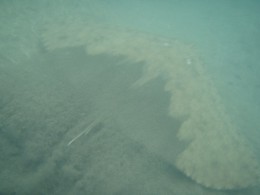 The water was shallow and the rays – if they were rays – were easily big enough to tip the canoe if they flapped around at the surface. I lowered my paddle very gently and as I touched the nearest sand-patterned shape there was an explosion of sand and two huge rays shot off. 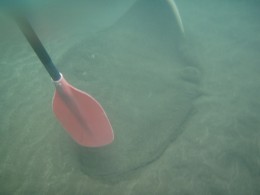 The next half hour was spent annoying the rays, which was probably a bit of a nuisance for them, but it was irresistible. Every time I lowered the red paddle down towards them they shot off at high speed over the seabed, trailing their tails in the sand.
Mummy wanted to swim with them, but by now there was quite crowd of people on the quay watching, and she was shy. 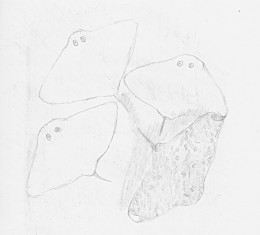 I have learnt a lot about rays since this first encounter. I looked them up in my book of Canary Islands sealife and I found that most of the rays here are mantelinas, or Spiny Butterfly Rays. They are harmless as they don’t have a sting. I also met a German marine biologist who was working here, and he told me that the things that look like eyes are actually the animal’s gills. That is why they blink all the time. They are breathing. 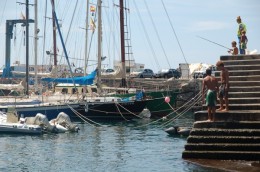 The rays seem to like to be near the beach in the port, but that might just be because they get a steady supply of fish guts if they live here. Now that we are looking for them we often see the huge diamond shapes swim under the dinghy as we come alongside the wall, and if we go to the beach we get out very carefully. I once very nearly trod on a ray. It shot out from under my feet.

I am not the only one who knows that the rays live on the beach. One evening I saw some drunken Spanish slobs trying to catch one. The men lured them towards the beach with a piece of mackerel for bait, and then they tried throwing rocks onto them. The rays were not very intelligent. They were even less intelligent than the drunks. They kept coming to get the bait even in spite of the rocks. never managed to hit them, but eventually one of them took the bait. Fortunately the men had not tied their knot properly and it got away – probably with a hook in its mouth I suppose. Eventually they managed to get a biggish ray, about a metre across, and haul it up onto the beach, but while they were running around looking for a knife it flapped back into the sea and got away.

The local fishermen are not quite so cruel, and I think they rather like the rays, but they do have one very bad habit. When they catch a ray they let it go again – but first they cut off its tail. Perhaps they are afraid that some little child might stand on one at the beach one day and be hurt, but I think it is really just because they like marking the fish and knowing which ones they have already met. 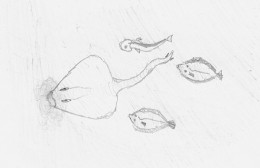 I have also seen a third kind of ray at Valle Gran Rey. One day I was sitting fishing in the dinghy, watching for my prey, when part of the sandy bottom detached itself and slid towards my bait. The ray was pale yellowish-brown with a long whippy tail – longer than either of the other two kinds of ray that we see here. I pulled my bait up quickly, because I didn’t want to hurt him, and I said, “The ray!”
“Hooray?” said Daddy, who was nearby, working on Mollymawk.
“Why?” called Mummy, from the cabin. “What’s happened?”
“Have you caught a fish?” Daddy asked me.
“I hope it’s not a weever,” said Caesar
“THE ray!” I cried in exasperation.
“What ray?” they all wanted to know
“Where? Where’s the ray? I want to swim wih it.” So saying Mummy jumped in.
But the ray had shot out of sight, gently waving its wing tips like some kind of UFO.

I looked the ray up in my book and found that it was a common sting-ray, or chucho as the locals call it. It lives on sandy bottoms but it is also found in deep water and in ports – like the one we were anchored near. It is dangerous, says the book, but only if touched. Mummy still wants to swim with it – she says she won’t touch it – but the only time that we have seen the rays while we are swimming the water has been twelve metres deep. The rays stay on the bottom, and they glide along so fast that we can’t keep up with them, even with our flippers on. 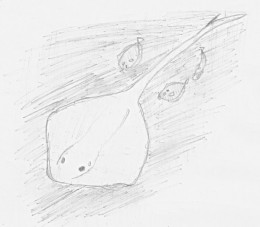 One day I saw a small sting-ray, about a foot across, which was being followed by a herd of assorted smaller fish – weevers, flounders, puffer-fish, and so on. Mummy thought that they were following it because they were mobbing it, like little birds mobbing an owl, but I think that the ray was stirring up the bottom as he swam, and looking for food, and I think that his entourage were hoping for a few scraps. 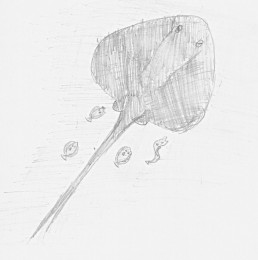 My best sighting of the rays came just a few days ago, again while I was fishing. First I saw a fairly large common sting-ray which went past with its usual escort of hangers-on. Then, as I peered after him, I saw another, really huge sting-ray. It must have been as wide as the dinghy’s length and it had an even longer tail.
I was staring in wonder after this huge animal, and wondering if Mummy would really like to swim with that one, when another, absolute GIANT of a ray appeared on the scene! This one was too big to be a sting-ray, and anyway, it was round. I recognised it as a chucho negro, or round sting-ray, like the one which the fishermen feed, but I had not realised that they could grow so big. I looked it up in the book again and I found that they can grow to 2.6 metres in width – which would mean they they were considerably more than 3 metres long, including the tail! The one that I saw was probably about the length of our cabin – which is just under 3 metres.

Mummy has still not swum with the rays, but I think she has decided that when she does she will wear a wet-suit, just in case the sting-rays are in a bad mood and start lashing out.