“What does Mollymawk mean?”
We’re often asked the question, by people passing by.

To us it’s obvious. “Haven’t you noticed that ruddy great bird painted across the transom?” we reply.
“You mean the seagull?”
!
Worse, some of you have been spelling her name with an h, as if the old girl were a bird of prey…

So I guess it’s time we explained. 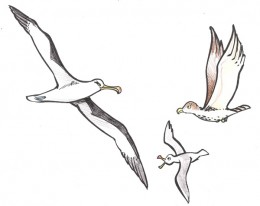 The bird painted on Mollymawk‘s transom is not an over-sized seagull; it’s a life-sized Mollymawk, or albatross.

And where does the word originate?

In days of yore the only things winging their way across the oceans were seabirds and sailors; genuine sailors, whose ships went with the wind or not at all.
Those old salts were a race apart. Like the ocean birds, they visited the shore infrequently; the greater part of their lives was spent on a rolling deck, with the wind singing in their ears and the spray dusting their weathered cheeks. And having spent so much of their time far from their native soil and their native folk, those men had more in common with each other than with the land-lubbers who tilled the earth in Devon and Sussex, or fished the fjords of Norway or the Isjelmeer.

Since the very beginning of man’s exploration of the world, the ships which sailed across the oceans have been crewed by men of all nations.
Take Columbus, for instance. He was so much a man of the sea that his racial origins have been lost; historians reckon that he was Genoese, but all we really know is that he spoke Spanish with a foreign accent. The men who went with him across the broad, uncharted Atlantic were mostly Spaniards, but there were a few foreigners in the crew and it is said that one of them was an English man.
And the first round the world journey, skippered by Ferdinand Magellan, was also conducted by a crew made up of many different nationalities.

Like cruising folk, the sailors of the past were simply people who wanted to see a bit of the world. Well, imagine how you would feel if someone told you, “There’s a bloke in town looking for fellows to go with him in search of Terra Incognita.”
Most people would have been tied down – tied to providing for their kids, or caring for their old folk – but for any lad who was young, free, and single the temptation must have been irresistible; always provided that he had a bit of spunk, of course. A great many of those early seafarers never reached shore again…

As time went by, and the men of many nations sailed together across the centuries, so the ocean became a melting pot. our Jolly Jack Tar was a cosmopolitan fellow who found himself forever sharing his bunk and his board with other citizens of the world; and thus it was that the culture and creed of the seafarer emerged. 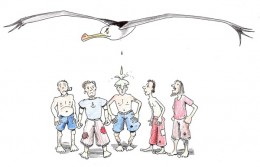 Sailors, one and all, stank of tarred hemp cordage, drank rum, and went looking for a new woman in each new port. They all chewed “baccy”; they all believed that if you whistled then the wind would blow. They sang chanties which might have been learnt aboard one ship, in a foreign tongue, and then were sung again, with different words, aboard the next. They believed in Davy Jones’ Locker, where the sailors went when they fell overboard, and they also believed that the birds which lived on the ocean were inhabited by the souls of sailors who died at sea. That made perfect sense (to them). If a chap died in his cottage at home, then the priest would obviously ensure that his soul headed off in the right direction, but if he died out here, in this godless waste, he would have to spend the rest of his days wandering.

Besides this culture, a new language also evolved, with words and phrases which mean nothing to anyone who doesn’t speak the lingo. So it is that folks who have never sailed are all at sea when told to “harden up”, or “put the helm over”, or “ease sheets”, and they don’t have a clue what we mean when we tell them that they are pinching, and that we’d rather they sailed the boat full and by. Many of them don’t even know whether they are sitting to port or to starboard, and some can’t even point out the mizzen, the tiller, or the boom.

The words of this strange language came from as many tongues as there were nations plying the oceans together. Whilst the bulk of English sea talk is English or Old English in origin, some of it is French and quite a bit comes from Old Dutch. In the 16th and 17th centuries, while the other European powers were building warships and squabbling over the New World, the Dutch occupied themselves by building a huge merchant fleet with which to create a trade empire. So it was that in this era most merchant ships were captained by Dutchmen, whose language consequently filtered into our own sea-speak.

And one of the words which the Dutch sailors brought to us was mollymawk.

One imagines that the men working for the Dutch East India company must have been amongst the first to encounter the great seabirds which wander about in the southern oceans – and, typically, they displayed no very great respect for these magnificent creatures. They gave them the name of “mallemowk”, or silly gull.
An albatross has a big head, in comparison to its body size, and when it sits on the water, looking up at a passing vessel with a bold expression, it does look very strange. Added to this, the birds also have a habit of swooping on anything which is tossed into the water behind the boat, and no doubt the men exploited this by throwing out hooks baited with scraps of salt-beef. Once captured, and dragged aboard a ship, the magnicent king of the ocean waves is as out of place and as a man would be if the situation were reversed. He stumbles and staggers on the rolling deck; he throws up his food; and even if the sailors are kind enough to release him, he cannnot find the space to run into the air and be free again. 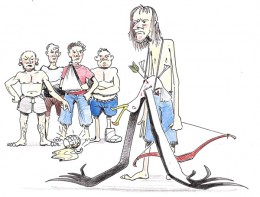 But although they made fun of the albatrosses (as, indeed, they did of everyone and everything, including themselves) the sailors were often quite fearful and were apt to be quite careful with these birds. The rhyme of the ancient mariner is based on fact; that is to say, it is based upon the fact of the sailor’s fear of ever slaying an albatross. This fear was based not upon some wishy-washy idea of future retribution due to the laws of karma, but upon that quaint and heretical notion which I mentioned above. If the soul of the lost sailor resided in a seabird, then killing one of these mighty “gulls” was bound to result in disaster.
As recently as the 1930s, many sailors still feared to kill a mollymawk, and if one of the crew was stupid enough to do so – with the aim of crafting a needle case from the leg bones, for instance – then any misfortunes which followed would be laid at this evil-doer’s door.

Alas, the ancient mariner’s modern counterpart is not so much a heretic as an unbeliever and a philistine. He drives about the sea in a huge motor boat, towing long strings of baited hooks, and every day he lands dozens of black-browed mollymwks, yellow-nosed mollymawks, wanderers, and other albatross species.

Of course, the modern mariner isn’t trying to catch these birds. He is out there to rake up the last of the tuna and the whiting and the kingklip. But when the “silly-gulls” spot fish down there, and dive to snatch up their dinner, our modern mariner doesn’t care. His ship doesn’t sink; the sea doesn’t rot and crawl with slimey things; the boards don’t shrink, and his wallet (or that of his employer) just gets fatter and fatter.

If you want to know more about this problem and what you can do to help, take a look at the RSPB’s Save The Albatross campaign. 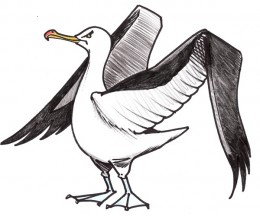 So, now you know: Molly is not a hawk, she’s an ocean-going gull who rides over the waves and wanders wherever the whim and the wind take her.
But if we keep eating fish caught by the long-liners working in the southern seas, she will soon be the only mollymawk out here.