In which we bid adios to one of the leading actors.

This is the ninth article in a series of ten. If you haven’t already read the others, start with the first article! 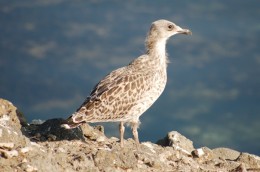 On the 12th of June Xoë and I were walking around the edge of the island when we came upon two chicks standing on a rock above the shore. One was bigger than the other. He was all lovely and golden because the sun was rising and shining on him. He was probably big enough to fly, but he didn’t want to. He looked very nervous. Right beside him there was another chick, a tiny, fluffy thing about two weeks old. It was snuggling up to the bigger chick, as if the bigger chick was its parent or its big brother! The next day they were standing together again, and the one after that too. They must be related in some way, or they wouldn’t be on the same territory. The parents of the little one wouldn’t let the older chick come onto their territory. But they can’t really be brothers because their ages are too different. 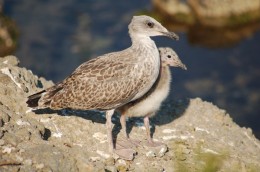 If the nests were very close then perhaps the chicks would get to know each other. Or if the mother of the little one died, would the older chick adopt him? No! Gulls are not that generous.
(I’m not sure that I agree. The parental instinct is a very strong thing, and if an orphaned chick begged from a juvenile, and tapped its beak in the correct place, creating the appropriate stimulus, then I think the older bird might very well regurgitate its food. Equally, the parent of the older bird, if it found the orphan in its nest, might perhaps be stimulated to feed it.Humans and wolves are not the only animals to have these intensely strong instincts, I am sure. Romulina has frequently demonstrated an instinct to protect Remus.
All this having been said, it seems most likely that the smaller bird was simply seeking the protection of the bigger one while its parents were on the wing. JDS)

Below the place that these two young birds were standing, and on the same days, we also saw a fluffy two or three day old chick on the water! Chicks are almost always keen to swim, but usually they take a few weeks to discover it. They do not usually swim until they have feathers. We actually know of two chicks, in N100, who live right on the edge of the water but who still don’t swim. They are very unadventurous. They were five or six weeks old before they even dared to step away from the tiny shrub that overhung their nest, and we still haven’t seen them swimming.

The little fluff ball living on the north side of the island must be very adventurous. He seemed quite at home paddling about in the shallows. His nest must have been right on the water’s edge for him to discover the sea so soon. He has a brother, and the next day when were walking around the island they both set off for the open sea, so we left quickly. We didn’t want the murderous sub-adult gulls to see them and kill them. 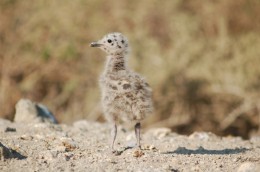 At the time we thought that these two little chicks were probably the very last ones of this year. About a month ago we found several nests which were built much later than the others. Most of them only had two eggs in them but, so far as we are aware, none of the eggs in these nests hatched. Some were addled and the others just disappeared. It may be that the chicks hatched and we haven’t found them, but we don’t think so because we don’t get scolded when we go near the empty nests. These very late nests might belong to birds which lost their first brood, or they might be the nests of gulls which couldn’t find room earlier on, or gulls which have only just become old enough to breed. (It would be interesting to know more about the yellow-legs’ hierarchy. Do the gulls keep the same territories each year, I wonder? And do the older ones drive off the younger, less experienced breeders? JDS) 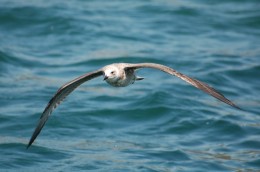 Romulina and Remus are very independent now. They have been ashore, on the beach which joins the two halves of the island, and they always spend the night ashore. They don’t spend much time with us now. It is frustrating not knowing where they go. I wish I could fly, so that I could follow them! (It must be very odd, for the birds, to have parents who cannot fly. They must think us quite inferior and inept. At the age of six weeks, when they took to the air, they were immediately transformed from pathetically helpless dependents to beings much more agile than we shall ever be, with an ability that we shall never, ever have. JDS)

They are also finding some of their own food now. They are less hungry and when they come aboard they do funny coloured squits, especially Remus, who probably eats all sorts of strange things.
Romulina is less messy than Remus. She tends to fly off to do her squits in the sea. She is less greedy than Remus. She takes a few mouthfuls of fish and then waits for it to go down before eating any more. Remus just gulps it all down and then he looks very uncomfortable and you can watch a huge lump going down his throat! 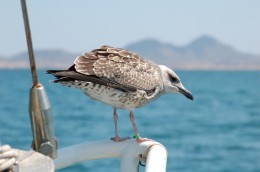 After eating, Romulina flies down into the water and carefully washes her beak. She always does this, and Remus never does. Then she is ready for her next adventure – chatting with her friends on the beach, or playing with me and practising flying. I sometimes get the feeling that Romulina comes to the boat for company more than for food. Often she is not hungry at all, but just comes and settles down on her perch for a siesta. Even when she is sleeping she still keeps opening one eye every second to keep watch. You can’t ever creep up on her. When I call her name she always whistles in reply.

Sometimes Romulina calls to me to come out and play. She moves from perch to perch around the boat. She swerves and glides, looking straight into my eyes while she flies past me just an arm’s length away. (She perpetually flies so close to the camera that her wing brushes the lens.) Once I managed to stand stroking her for several seconds while she hovered beside me in mid air. She can only do it in a strong wind. Sometimes she hovers for about a minute over my out stretched hand eating the bits of cheese that I was holding! Her favourite perch is now the pulpit at the front of the boat. It took her a long time to learn to land there. She will also land on my head if I ask her to. She doesn’t usually fold in her wings while she is on my head. She hovers and puts hardly any weight on me, but she pulls my hair and it hurts! Sometimes she leans over my face and tries to peck my nose! 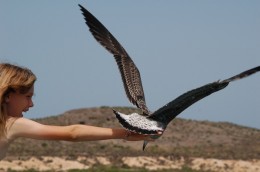 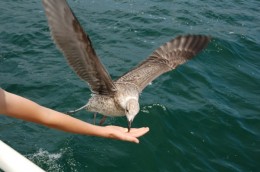 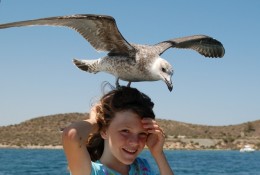 On the 21st of June Remus and Romulina came to the boat very early in the morning. Remus was being naughty, as usual. He was destroying Mummy’s shoe. I got up and spoke to him, and rescued the shoe, but I did not feed them as it was too early. They flew off, and to our surprise they did not come back when we got up. At midday I saw Remus chasing a tern. Perhaps he was just playing, or perhaps he hoped he could make it drop its fish. We have seen him lots of times since then, but he has never come back to the boat. Obviously he has found out how to catch fish, or found the way to the dump. (Or perhaps this big baby, with his ceaseless baby’s begging call, has been adopted by an adult gull bereft of its own chicks..?. The Ship’s Naturalist thinks this is a silly, sentimental idea. JDS) 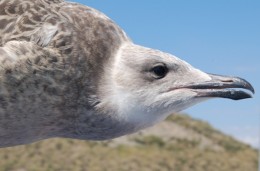 Remus only ever came home to be fed, so it is not surprising, if he can find his own food, that he doesn’t come any more. But we were not expecting him to leave so suddenly. If it weren’t for the fact that we have seen him since we would think that he had met with an accident, but he is very distinctive. He is bigger than any of the other juveniles, and he looks different on the water, and he makes that persistent squeaking noise, as if he had swallowed a baby’s rubber toy. One evening when Romulina was aboard he flew past and the two of them were calling out to each other. I suppose she still sees him every day and plays with him. It is strange that he should be the one to leave first. He was hatched on board the boat, and he is less afraid of people, so you would think he would stay with us for longer. 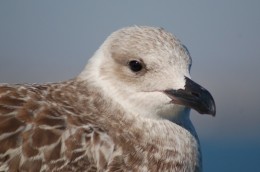 All the birds are moulting, including the juveniles. This is odd, because our bird book says that only the adults and sub-adults are supposed to moult at this time of year, but the beach is covered in feathers from both adults and juveniles. (But the juveniles are only moulting their body plumage, not their flight feathers.) Another odd fact is that the birds from the different sides of the island look different. On the west side they have dark heads and on the other side, around Barbecue Beach, they have paler heads and white necks. Romulina used to be quite easy to spot while we are anchored in the big bay on the west side of the island, because her plumage looks like the gulls from the other side where she was born. But when we were off Barbecue Beach it was sometimes quite hard to tell them apart. Now the juveniles from the different parts of the island are mixing, and there are both dark-headed and pale headed juveniles on both sides of the island.

On the 24th of June we saw Remus with a group of other juveniles. They were flying southwards, perhaps to the dump. I wonder if he will ever grow out of making that cheeping noise? He is not afraid of us. His chick-hood has taught him that humans cannot fly, and unlike the other gulls he is not afraid to come close to the boat. Some friends told us that when they anchored off Barbecue Beach all of the gulls went up except one juvenile.
“That’ll be Remus!” I said.
He no longer comes when I call, but then he was never as good at that as his step-sister. It is very satisfying to have successfully reared him from egg to independent bird, and to see that he is an accepted member of the seagull colony.