Part Five of the tale of an Overland Journey through Chile

Orange mountains; a clear blue sky; and pinned to the blue sky, ahead of the mountains, two colourful hot-air balloons. This was the sight which greeted me when I peeped my head out of our roof-top tent after our night on the salt-pan.

The sun was just rising above the Andes and as I walked into the desert my shadow cast a long trail, tethering me to the van. I wanted to take some photos which would describe the immensity of ‘that inverted bowl’ and the vastness of the orange ocean of rumpled, dusty salt; but even when the van was but a dot in the view-finder, the feeling of insignificance escaped me.

We had anchored in the vicinity of a solitary tree – the only thing, beyond the environs of the village, which was more than twelve inches tall – but its presence cluttered the photos, seeming to suggest the possibility of verdure where, in truth, there was none. None but this peculiar exception to the rule. 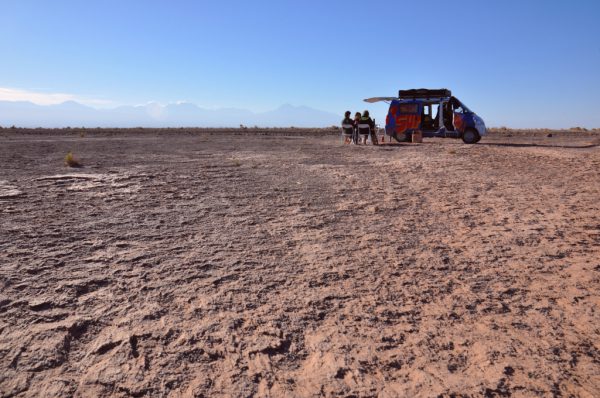 Our campervan was equipped with a folding table and chairs, and so we set them up and ate a cooked breakfast. What a bizarre scene we must have made! – but there were no passers-by; we had the entire desert to ourselves.
Afterwards, we headed for the Valley of the Moon.

There is one good thing about all those tour operators in the village of San Pedro de Atacama: By studying their advertising photos we were able to decide which of the local sights we wanted to see – and Valle de la Luna, or the Valley of the Moon looked like by far the most interesting option.
For the sake of back-packers visiting the Atacama I’ve included a couple of snaps of other places near to the village.

Our ‘reccy’ in the village had also taught us that the guides like to get their punters to the Valley of the Moon at sunset. So – obviously – we had decided to go in the early morning.

Valle de la Luna
It’s difficult to find words to describe ‘La Luna’, because the ones which might once have served have all now been abased. If I say that the place is truly awesome, you’ll get just a tiny hint of the fact that it’s out of the ordinary. Even photos can’t begin to do justice to the place; so i’ll have a go at describing it in geological terms.

Basically, what we have here is an interlocking network of small valleys which have been carved, over the course of millions of years, by rainstorms and winds. The visitor enters the principal valley at one end and is guided to a certain place where a bold promontory of crumbling orange-brown rock juts out between two deep side-valleys. 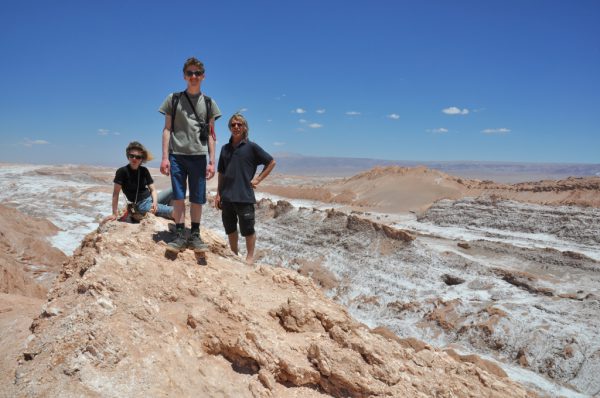 Looking down into the valleys, one marvels at their fragility. Their sides are riven with gullies where ancient rainstorms have carved a thousand pathways, and at the bottom of each valley there meanders a serpentine stream-bed. Most astonishing of all is the fact that the valleysides seems to be dusted with snow; but, of course, it isn’t snow – it’s salt. 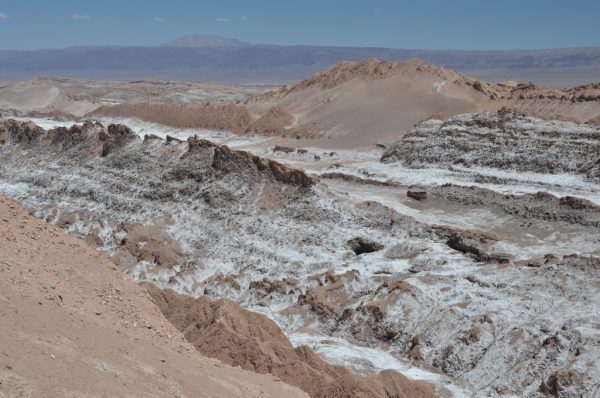 Once upon a long time ago, there was a vast lake in this region. When the Andes were formed, the lake was trapped. Its water no longer had an outlet. Since there was also no rainfall to speak of, the lake gradually dried up, leaving only the minerals that were dissolved in the water; and the Atacama salt-pan and these ‘sugar-dusted’ valleys are the result.

In fact, there’s more than just a coating of salt in the Valley of the Moon. There are great, glassy lumps of it hidden under the orange-brown dust. For some 75 years there were small-scale mines being worked in the valley, and production only stopped in 1994. 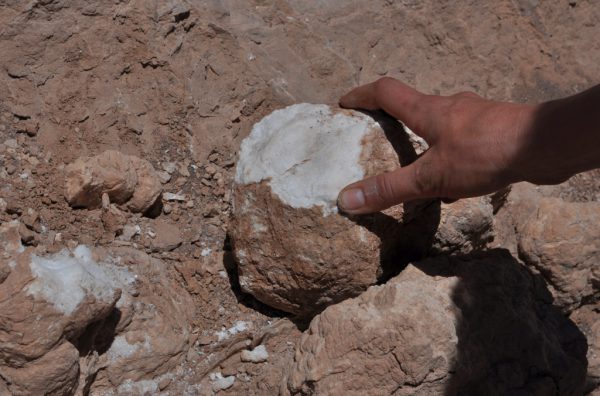 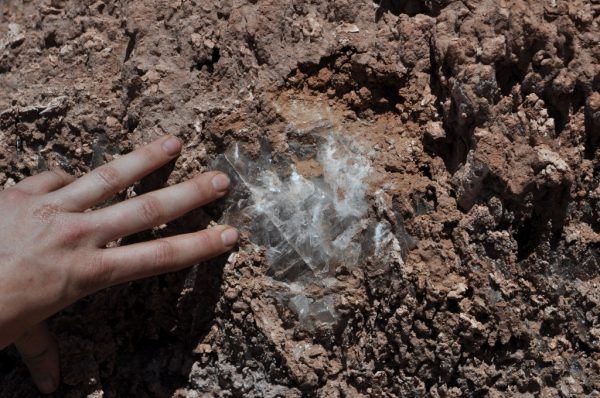 When the sun is low in the sky it enriches the colours of the valleys and of the distant mountains – but by visiting ‘La Luna’ during at an off-peak time we had the place pretty much to ourselves. To be exact, during the course of the day we met four cyclists (two Chilean; two Finnish), one other vehicle (an Aussie couple), and four Argentinians who had chosen to walk into the valley from the northern end in order to avoid paying.

The place was so extraordinary that we could happily have passed a couple of days just sitting here, taking in the ambience; but as it was, the cost of hiring the van and our commitment to a cat and a dog put us on a tight schedule. We ate our sandwiches gazing out across the indescribably arid and dramatic valley. We marvelled at the shiny, clear rock exposed in the salt mine. We were awed by the wind-carved, multi-layered cliffs. We drove to the end of the road and the end of the valley to look upon some formations known as ‘the monks’. And then we made our way back. 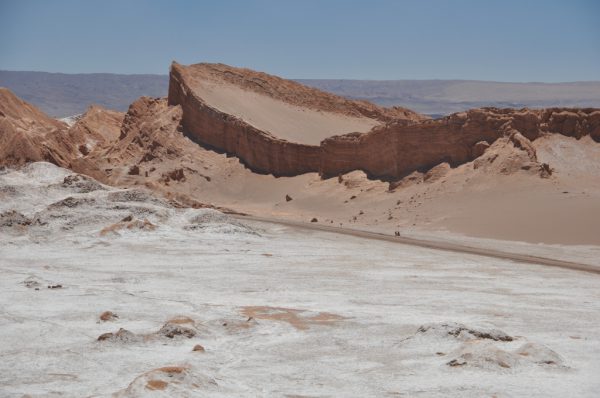 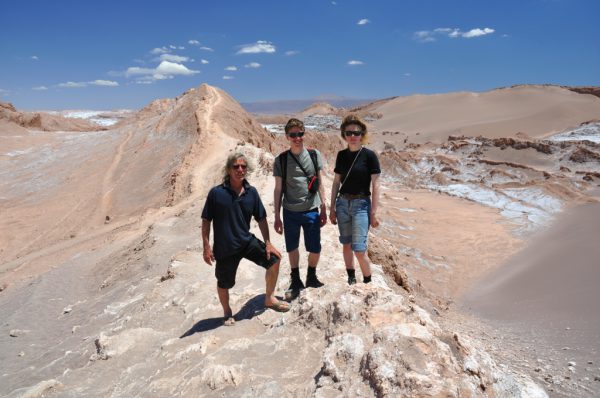 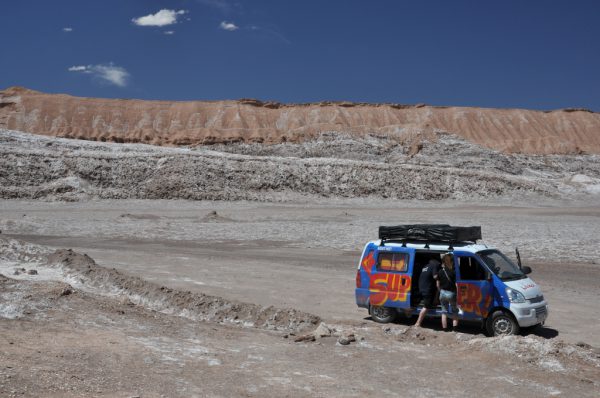 We had left ourselves just enough time to explore a cave, which lies near the entrance to the park.
Seemingly, there are caves under the crust of the Atacama salt pan – but this cave, in the Valley of the Moon, is cut into the rock. It proved to be no mere cavern. Those same prehistoric rainstorms which carved out the valleys and lined their walls with gullies also hewed a path downward, creating an underground stream. Walking along the course which the ancient stream followed, we saw where it had rushed through, whittling away the soft sandstone. 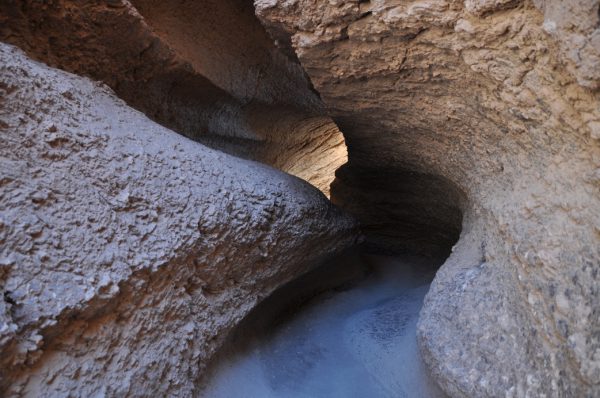 In other places the roof of the cave had fallen in, perhaps hundreds of years ago, and the debris had been ferried away. There were certain parts which I passed with trepidation, since it was obvious that here, too, the rock must eventually collapse. One never knows when it will happen. In Namibia there used to be a famous sandstone pinnacle called ‘The Finger of God’. Tourists flocked to see it until, one morning in 1988, the first bus-load went to have a look and found it missing. 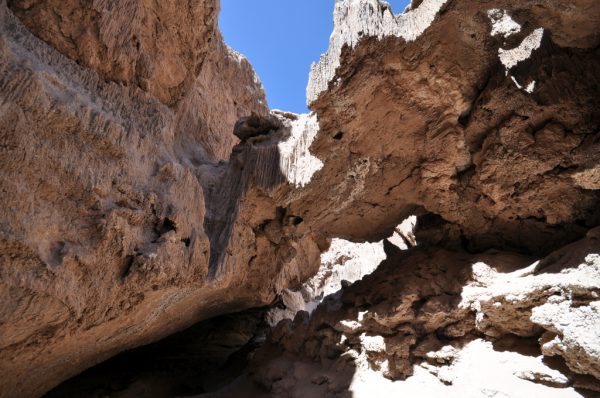 The first of the mini-buses was just arriving as we left the Valley of the Moon. We made our way back into the village, and then we drove out the other side and went to an oasis. At this place, which is currently known as Pozo 3, there is a swimming pool; but contrary to the information given in our Rough Guide there was no campsite. After eight days on the road and in the desert we all felt ourselves to be in need of a shower – our hair was thick with dust and our skin felt grimey and parched – but if we couldn’t have a night of ‘luxury’ then the pool would have to suffice.

In fact, the pool provided an excellent alternative. The water was clear and clean. However, unlike the water at the Tatio geysers it does not derive from a thermal spring, so it was rather chilly.
After our swim we asked the lifeguard whether the water was also safe for drinking, and he said that it was. So we duly filled our jerrycan and our bottles from a nearby tap, in the picnic ground.
The fellow watched us do this, and then, when we had finished, he said, “I wouldn’t drink it myself, mind you, because it’s full of heavy metals such as mercury and lead.”
Thanks, mate…!

We had arranged to spend the night star-gazing. Star-gazing is something that we can do very easily from our boat when we’re on the open ocean, but the companies in San Pedro promised the use of mega-telescopes and the guidance of a pro. The photos on the walls showed intimate pictures of Jupiter and its moons. Thus were we beguiled.

In the event, the professional astronomer evidently knew a lot, but the kit was fifth-rate and the venue was far too near to the town, so that sky was not at all clear. Saturn was still just a tiny dot. Its rings were visible – but they are also visible with the use of a high-powered pair of binoculars.
We can only assume that the people who rave about these star-gazing excursions (on Trip Advisor) are city-dwellers who have never previously had the chance to see the night sky. So far as we are concerned, this outing was quite boring and merits only one star. (For comparison – we would award 7 out of 10 to the El Tatio geysers, and 23 out of 10 to the Valle de la Luna.)

After the talk, our host fed us hot chocolate and biscuits; and then we slipped away to park all alone under the vast tapestry of the sky. 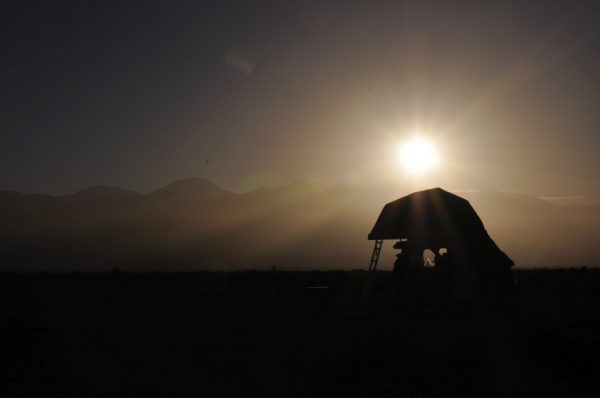