Greetings! After three months wandering in the wilderness of the Chilean channels and the Golfo de Penas, Mollymawk has surfaced. I think my mum and dad really thought we’d gone for good this time!
Three months is also the length of time that a Buddhist monk or nun spends ‘in retreat’, watching his breath and his mind and keeping Noble Silence – which means only talking if you have to, and only about relevant, necessary things. Our ‘noble silence’ consisted in reporting our position every other day to the Chilean authorities (a legal requirement) and otherwise using our sat phone only in order to get the all important weather forecast. We didn’t try to listen to the news – we specifically wanted nothing to do with Society; right now, Society on both sides of the Atlantic Ocean seems to be plummeting down into an abyss – but our retreat from the world was not so peaceful as that of the monks and nuns. Given our cruising ground there wasn’t much chance of much peace. The Golfo de Penas is notorious for its storms.

The Golfo de Penas is a place which most folks dash across as quickly as they can, often after waiting a couple of weeks for a window of safe weather – but you only have to glance at the chart or take a look at the satellite images to see that there is a huge potential here for exploration.

Our return from the wilderness to civilisation was made via the Fiordo Aysen, an estuary whose shores are lined with salmon farms; and at the top of the river – or rather, at the top of its navigable extent – we anchored in a natural basin which is now overlooked by urban developments and the sprawl from the nearby commercial fishing port. A road runs along the shore some three hundred yards/metres from our anchorage, and throughout the day there is a steady flow of lorries and tankers.

After three months in the gulf and the channels, where the only free food is seaweed and wild celery, we, too, had a pressing need for the supermarket – we were almost down to our last split-pea – but that wasn’t the only reason why we put into Chacabuco. We put in principally because the Chilean visa is only valid for three months. After that, you have to leave the country and re-enter.

So…
Friends had told us that Chacabuco is very windy – and we’d thought back to Puerto Natales and shuddered; but the fact is that compared to Chacabuco, Natales is just a bit breezy. When we arrived here the Port Captain’s minions asked us to come straight to their office and perform the formalities – but two days passed before we were able to row ashore! During this time the wind shrieked through the rigging and the boat was pressed over, now to starboard, now to port. I reckon the gusts were possibly the strongest winds I’ve ever known, and I was afraid the anchor chain was going to snap. Yet throughout this this whole time the forecast showed the area swept by a force two…!

Then came the rain – torrential rain – and still with quite a lot of wind. Since renewing the visas involves a trip to the Argentinian border we decided to put it off until things had settled down a bit. Time was running out. We had arrived with a week to spare, but the bad weather had eaten into that. Fortunately, however, the forecast showed a period of absolute calm just three days before our deadline.

On the appointed day I woke up, looked outside, and…  everything had gone!
The sky, the trees, the hills – they were all white, and the water was sheet of grey ice.
The road was oddly silent and a phone call confirmed what we feared: The local highway would soon be cleared with a snow-plough, but the way leading up into the mountains was impassable. 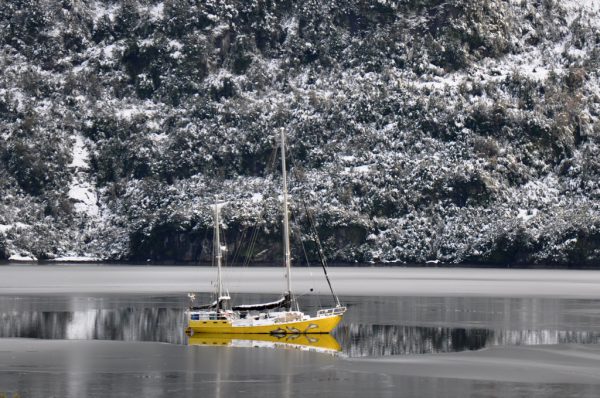 So… on the following morning we phoned for a taxi – ‘cos if there’s one bloke who’ll always get through it’s a taxi driver. (Nick used to be a taxi driver…) We asked the man to meet us at the edge of the road in ten minutes time; and then it took us half an hour to get ashore. The ice, which had seemed to be only a thin skim on the water, was actually so thick that we could hardly break a path. 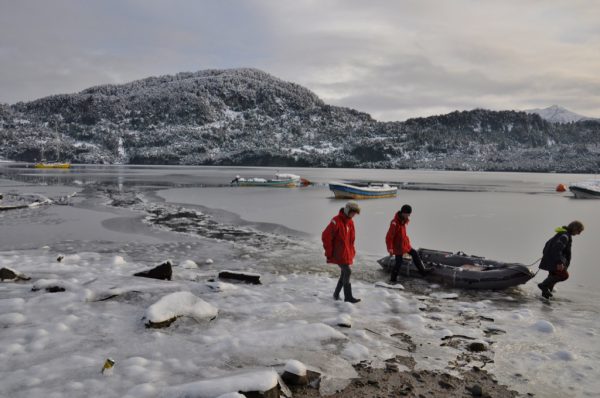 Fortunately, Pablo waited. And then he took us up the icy road and up through the mountains, to the town of Coyhaique; and from Coyhaique he took us onward and upward, to the one-horse hamlet of Balmaceda. Along the way we passed a couple of cars which had come off the road and several lorries which had got stuck trying to climb the slippery hills – but Pablo pushed on, steadily and carefully.

Balmaceda’s only rasion d’etre is the border crossing and an associated airfield. Between this place and the Argentine border lies a band of no-man’s-land three kilometres wide; and since taxis are not allowed out of the country, most tourists are obliged to walk to and from the Argentinean post. In view of the weather conditions, however, the Chilean immigration officer elected to disregard the requirement for us to actually go and visit another domain, and she stamped us out of the country and then stamped us back in again all in one shot. (I guess it could have been politically awkward if we’d set out and then died of hypothermia…)
Phew! Mission accomplished!

Meanwhile, our good friend Gean was having troubles of his own getting the immigration authorities to let him visit England. He eventually had to buy a return ticket – from England back to Brazil – even though he’s actually planning to go from England to France!
You know, I can’t help thinking – or rather, I can’t help hoping – that some day soon people will be scratching their heads and saying, “What…? You mean you used to have to do all that, just to be allowed to stay on in a country (and spend your money there)?”
Or maybe one day people will say, “So what was a country, exactly…? Why didn’t everybody just share everything?”
Even so – even having regard for the surreal nature of the situation – I’m acutely aware of the fact that we Europeans are very lucky in being able to cross these politico-economic fences without too much hassle. I will never forget the young Cabo Verdean kitesurfing instructor who looked at our dog and said sourly, “She’s luckier than me. She has a passport and she can go to Brazil and Portugal, but I’m not allowed to go there.”
I would also be the first to admit that this enforced journey to the border was, in itself, a marvellous adventure. Were it not for the requirement to jump through these legal hoops we would not have seen any part of Chile’s interior, slender though it is – and it is well worth seeing.

We’re hoping, before we head back out into the wild and windy channels, to find the time to upload some photos and stories. In fact, we’re planning to pick up where we left you dangling, a couple of hundred miles further south. In the meantime, we offer you, herewith, a few glimpses of the wonderful Patagonian wilderness and its inhabitants.

This cove is hidden away in a corner of the gulf and it offers a perfect refuge from the storms; so – since it didn’t have a name, and being its finders – we christened it in honour of Luang Por Sumedho. Luang Por is the elder of the two Buddhist monks who sailed with us in Tierra del Fuego. He has devoted most of his life to creating monasteries where men and women might study and practice the philosophy taught by the Buddha, and those monasteries are refuges from the storms of worldly existence. At Cittaviveka or Amaravati ones angst and anger regarding Trump and Brexit are swiftly erased by the all pervading mood of peace and equanimity. And likewise, just as the wilderness itself was our refuge from the insanity of the current political dramas, so Caleta Sumedho offered real, physical shelter from the bad weather.

Without a doubt, a boat or a monastery is the best place to be at the moment, so far as one’s mental health is concerned… Soon we’ll be heading back out into the wilderness again – so we ask you, while we’re gone, to keep an eye on those jokers who’ve somehow got themselves into power.
The only problem with the going away is the coming back; coming back and finding that things are even worse than when we left.