Once again, it was Tania who first spotted the dolphins. They were feeding at the back of Dixon Cove when we entered. Their tall, elegant fins immediately betrayed them as being from the species known in English as Peale’s – or, as I prefer to write it, Peales. Although they promptly disappeared – causing us to think that we had frightened them – on the following morning they came back and gave their strange visitor a thorough examination. And when we got into the dinghy and rowed around amongst them they swam so close to the oars that they nearly touched them, and they jumped so close that they splashed us.

Having thus demonstrated a far greater curiosity than dolphins normally show, the Peales dispersed into the wider bay, and throughout the day we glimpsed their fins from time to time as they foraged amongst the kelp. Theirs seemed to be a happy existence. Ours was happy too – except for the rain… and except for the contrary wind… While the dolphins played merrily, as it seemed, in the Garden of Eden, we had created for ourselves a task which some would consider hellish: that of battling north through the channels. And all, as it might appear, for the sake of getting back into Paradise. The destination named on our zarpe (or cruising permit) was Puerto Eden!

Having now rejoined the Approved Shipping Route for vessels travelling between the Straits of Magellan and Puerto Montt, Mollymawk was once again following in the wake of our old hero, Edward Allcard. We had originally planned on stopping in the places which that marvellously ancient mariner used on his solo cruise through the channels, fifty years ago; but in the event we stopped in whatever place we happened to reach at the close of each day. This is really the only sensible way to travel north through the channels – and it was the way that Allcard, too, travelled. Clawing his way along the narrow waterways, the by-the-wind sailor aims for a given place – and if it is attainable, all well and good; and if one can get passed it, in the available hours of daylight, and reach somewhere two miles further along the way, so much the better.

Allcard didn’t stop in Caleta Dixon – he stopped two miles sooner, in a place called Caleta William. He had only the Admiralty Pilot to guide him, and that volume, intended for the use of commercial shipping, does not mention any of the little nooks and crannies which are nowadays used by yachts. Still, Allcard was better off than William Skyring, who had only the tales of a sealing captain to guide him in his search for a channel. And Skyring was better off than Pedro Sarmiento de Gamboa – who had nothing.
Ah, yes – I said I would tell you about Sarmiento… And I will. Eventually.

Having rejoined the long and winding sea-road which Allcard pursued when he made the journey described in his latest book, we now promptly left it again. Our guide described another route – not so much a short-cut as a more scenic narrow, backstreet – and so we elected to follow it, though it meant forgoing the chance to anchor in a place called Lecky’s Retreat.

Ah, but Shakespeare was so wrong: an anchorage by any other name would surely not sound so sweet! The idea of anchoring in Lecky’s Retreat was almost irresistible!
But who was Lecky, and from what was he retreating?
The chart of Patagonia is liberally sprinkled with the names of English admirals and English politicians, none of whom ever visited this region. Canning, Castelreagh, Burney, Peel, Nelson, Cockburn, and all the rest of them – they were glorified in this grim grey region by men of patriotic sentiment or by lieutenants who probably hoped, in return, to gain a hand up the ladder of promotion. But Lecky, it would seem, actually, travelled here; and whereas most explorers disdained to inscribe their own name on the chart he was not too shy to do so. He also claimed an estero, a look-out, and an island.

However, as I say, we chose to forgo visiting Lecky’s landmark in favour of pursuing Canal Harriet.
And who was Harriet?
Concerning her, I know even less – indeed, I know nothing. But half way along the channel which is dedicated to her forgotten memory there lies a little cove called Theleme – and that place was named for a yacht.

Notwithstanding the fact that Sarmiento and Skyring, each in their turn, gave labels to every island which they passed and every bay where they anchored – and even allowing for the fact that others, following in their wake, have added their mark – there are still a great many headlands, coves, and hills in this region which have never been christened. And according to the unwritten rule of exploration – a rule pursued by the British Admiralty and subsequently obeyed by their Chilean equivalents – whoever first discovers and describes a new feature has the right to provide the name by which, henceforth, it will be known. Thus, the nooks and crannies useful to yachtsmen, and not previously used by anyone else, are up for grabs!
Although some of these coves have been named in honour of modern-day heroes – such as Rainbow Warrior – in practice an anchorage generally becomes known by the name of the yacht which first reported it to the authors of the cruising guides – and Caleta Theleme is one such.
Somewhere in the world there is a yacht called Theleme; and once upon a time she passed this way.

Having beat along the narrow channel named for Harriet, we motored to the head of Theleme’s little inlet – and there, nailed to a tree trunk and flapping in the wind, we found a pair of trousers.
There is another custom amongst folk sailing in this region – a custom begun two centuries ago by sealing ships, and one which is still pursued by some of the fishing boats: It consists in nailing a board, bearing the vessel’s name, onto a convenient tree. Slocum mentions adding his own small plank to a tree adorned in such a way; and in Isla Jaime we had seen a tree which carried the names of two local fishing boats. Was this decoration to the dead tree in Theleme an attempt to begin a similar custom, we wondered?

The day had been cold and dull, but as we finished tying our lines the sun came out; and so we enjoyed a very pleasant scramble on the adjacent hillsides. There’s a pop song one line of which is forever spinning round in my head: It goes, “Always take the weather with you”.
If only one could…! If only the sun always shone! On a miserable day Canal Harriet is nothing much, but with the sun now peeping from between the clouds we looked down over a magnificent scene of islets and estuaries, moorland and mountains. If it were like this every day I could live here…!

If it were like this every day there would be villages on every isle.
But it isn’t like this very often, and the hilltop was pocked with puddles, each one containing dozens of toady tadpoles. Between the puddles the ground was soggy with sphagnum and sundews; and the trees clinging to the hillside were carpeted with furry moss. Were the sun to shine on a regular basis the scenery would be very different.

On we went, on the morrow – and in thick rain. Whales were spouting in the channel just south of the narrow cove, but we turned north. The day was spent beating past estuaries and rugged hills which now looked more grim than glorious.

What a name…! With respect, couldn’t they have just called it Caleta Moonlight?
If Lecky’s Retreat was alluring this one was the very opposite. Nor did the place live up to my expectations. Two miles long, it slices into an island at the back of the cluttered gulf which Skyring named for Admiral Nelson, but whereas I had imagined it to be a narrow gorge it is actually more like a river. The land here is untypically low.
Still, this caleta was a good find, being in the right place – there was nowhere else we could reach that day – and there were dolphins waiting in the entrance. They rushed over to make our acquaintance and escorted us up the corridor.

We toiled along – motoring now, as the creek is only a few yards wide; and then, as we came within sight of the cove which was to be our anchorage, what should we see but a man! A man, clad in red oilskins and standing on the hillock above the mooring place. 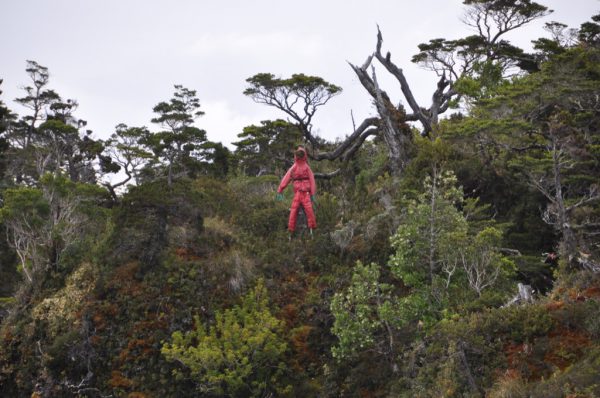 I must say, when I first saw him my heart nearly stopped – for what could a man be doing here, on this uninhabited, remote isle on the edge of the stormy Pacific? In the split second that it took for me to recognise him I considered all sorts of possibilities: Was he a shipwrecked yotty? Or had the Armada established a base here? Could it be a singlehander, who had died…? Then, as I say, I recognised him; I saw that he was, in fact, just a manikin. To be precise, this man was a tree clad in an oilskin jacket and trousers. 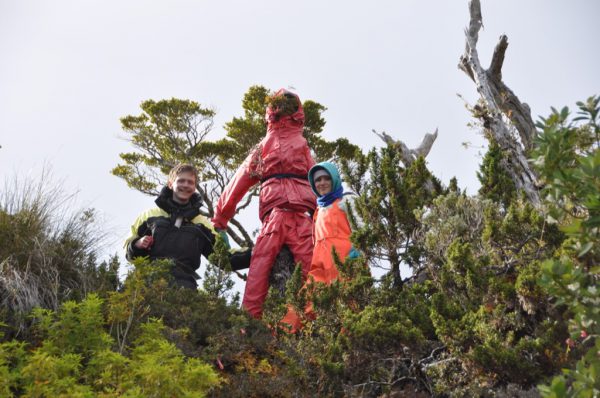 Presumably this work of art was the creation of the same soul who left his mark at Caleta Trousers.
After we had moored, there followed a brisk debate during which I argued strongly for the removal of the thoroughly offensive object and the rest of the crew all argued for something which they called “not interfering” and “respecting somebody else’s right”. (But do we have the right to litter pristine parts of this planet with cast-off clothing, just for the sake of making a practical joke? And it was plastic clothing, mark you, unlike the trousers.)

In the evening the sun came out and the crew scrambled up to The Man and rifled through his pockets, but if he had a wallet – or a message – it was already gone.
Bad weather kept us here for two more days, during which the bosun and the chief bottle-washer braved the rain and rowed to the head of the inlet. After some difficulty in fighting our way through the wet scrub, we scrambled up onto the moorland and peered out towards the Pacific. On a fine day it must be rather nice up here…
Ah, the weather is everything in this region! Even the most beautiful hill is drab when the sun fails to shine, and contrariwise. Beauty lies where the light paints bright colours and sharp shadows.

In the evening the dolphins came up the creek, and a kingfisher fed his greedy young on a branch above us. But the rain still fell, and the man still stood there, laughing at us. It is for him that I will remember this place: It is Caleta Dummy.