Oosh-why-a – that’s how you pronounce it; and just the name is enough to excite curiosity. Amongst Argentinians, Ushuaia has connotations of extreme travel and grand adventure. They come here to ski and snowboard, but more than anything they come here to stand at the End of the World.
Still, if it were called Martinsville or Buenas Nieves I doubt if this place would be so popular.

Even before we came south, I was already eager to visit Ushuaia; but having now visited it several times I must admit that I’m disappointed. The contrast between Puerto Williams and Ushuaia is such that it’s always fun to pop across the channel – after three months in Trumpton even the most parochial-minded of us fancies a visit to a supermarket and the chance of croissants for breakfast – but on each occasion that we visit the place I am less enthralled. You see, to be frank, Ushuaia is a bit of a dump.

Now, the problem with the camera is that it jolly well can lie. It can make a Southern Ocean gale look like a force three in the English Channel and it can never even begin to do justice the majesty of a glacier, but put an SLR into the hands of an artist and she simply can’t avoid seeking out the best lighting and the best angle. The camera might not be able to grab and pixelate awesomeness, but it is certainly capable of making a crumby town look as pretty as a postcard. So, in choosing the images with which to illustrate this article I’ve compromised. For every arty pic I’ve included one honest view of the concrete and grime.

Let’s start with something scenic.

This photo reminds me of a postcard which I once received. It showed three camels trudging across a lonely sand dune, and on the back my friend had written, “Behind the photographer there is a line of hotels”. In this case, there are no hotels but the photographer is standing by the side of a very busy road. Come to that, just beyond the sunlit tug you can see the container port – and no container port is ever going to win an award for beauty.
Still, in the distance beyond the port you can see the snow-capped mountains. And that’s what Ushuaia is all about: It’s all about the setting.

Meanwhile, on the opposite side of the bay…

Beauty is in the eye of the beholder, and nowhere is this more true than in the case of graffiti. Hate it, ignore it, you can’t love it, can you? Not unless you’re the doer.
Well, I can. Just this once. In this particular setting, on this old boat abandoned on the foreshore, I think it’s certainly an attraction. The weird tiger-men have been there for at least a year, but the face on the port bow appeared one night during our recent visit.

I’m wondering whether, some day soon, someone will pluck up the courage to nip through the barbed wire fence and do something similar to this piece of military memorabilia.

The Argentinian authorities are rather fond of adorning their towns with glorious sights which, one assumes, are intended to invoke nationalistic pride. I don’t know what effect they have on the locals but personally I just find them rather depressing.
According to the plaque which stands in front of it, this DC3 made several trips around the Horn and in 1962 was the means by which the Argentinian flag was first taken to the South Pole – all of which is fine, and very interesting – but it seems a shame, since they’re so proud of it, that the plane isn’t in flying order.
For me, a derelict plane, with its engine cowlings missing, is just rather sad.

Monte Olivia is one of my all-time-favourite mountains. However, I don’t call it Olivia; I call it Grinch Mountain. I christened it thus before I knew it’s real name, because it just looks so much like the crazy, impossible peak in Dr Seuss’ story.

Besides a display of weaponry, the other thing that every Argentinian town has is a memorial to the victims of the Falklands Conflict. This usually takes the form of a plaza, but in Ushuaia they have an ‘eternal flame’. Behind the flame there’s a list of all the Argentinian men who died for the glory of their nation. I’m told that many of them were conscripts.

The first time that we visited Argentina, 15 years after the Conflict, there wasn’t much talk of the Malvinas, but just as Galtieri used them as a means of rallying the people behind him, so Christina Kirschner, during her presidency, did the same. This memorial dates from her ‘reign’ and from the 30th anniversary of the dispute.
We’ve noticed that there is far more interest in the islands in this region than in Buenos Aires. Some of the people down here are almost as passionate about them as the folks who live there.

Again, I just find this monument very depressing, partly because war is depressing, but also because it’s not remotely scenic. (Behind the photographer there is a conglomeration of concrete edifices.)

You know, thinking about it, I can’t come up with a single South American town which isn’t verging on the side of ugly; and that includes Rio de Janeiro, which is simply a mass of concrete tower-blocks interspersed with ghettos.
Is it a matter of finance – is it simply that these ‘developing nations’ can’t afford to invest in more attractive architecture? – or is concern for such things purely a European foible?

Maybe it doesn’t matter what the place looks like. Perhaps the desire for ‘prettiness’ is bourgeois?
Or maybe it reveals too much attachment to things of the senses?

“Oh, but it does matter!” cries my heart.
Where there is beauty then my heart is uplifted. Where there is only ugliness I feel glum.
I’m not alone in this, I know, for why else would so many people find beauty and perfection and some sort of solace in the wildness of Nature? I’m not sure why it matters, but it really does matter; and I wouldn’t mind betting that people who live and work in a utilitarian environment are less productive and less creative than those who are surrounded by things which please the eye.

If we can mange to ignore the entangling wires, the concrete, and the street signs, then the old corrugated-tin cottage on the right-hand side of this picture still retains its charm.
What I don’t understand is why people don’t design and build things like that any more. Is concrete really so much cheaper?

Here’s another old house. This one has now been turned into a hostel. 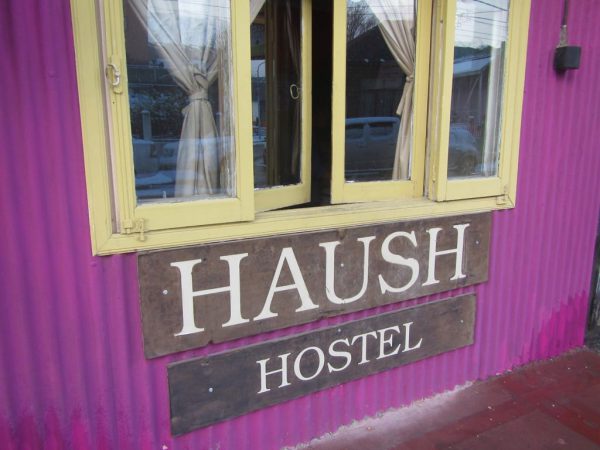 Peering through the windows I noticed that the furnishings were just as quaint as the cottage itself and certainly a lot older than the pink paint – the cooker looked to be of vintage c.1950, and the dining room table was very rustic – so, evidently, anyone who stays here will gain an appreciation of the way things were.

Perhaps city planning, or the lack of it, really is just a matter of cost – of cost, and of lax building regulations. From a distance these cottages look colourful and quaint, but one suspects that on closer inspection they would prove to be not so well built as the early to mid-20th century houses in the previous pictures. Still, they do have one thing that those houses in the heart of the city now lack: They have the most marvellous view.

That’s what Ushuaia is all about – as I said before, it’s all about the setting. People don’t come here to admire the architecture; they come to get out of the town and onto those snowy slopes.
Those of us who have had the privilege of visiting other, more remote regions of Tierra del Fuego are simply spoilt. Too spoilt to appreciate the spoiled…

But even here, in Ushuaia, we yotties have the advantage over almost everyone else. Moored to the jetty at AFASyN, we get the best view of all of the mountains.