We’re interrupting our series of articles about Wulaia and the natives of Tierra del Fuego to bring you a short story about a seagull. As ever, if you want to enlarge the photos you can just click on them; and then you click again, on the surrounding page, to get back to the text.

Last week we were walking along a stony spit where the local cormorants, oyster-catchers and seagulls are preparing to nest. As we came near to their roost, the kelp gulls all put up except for one; this one just stood there flapping. 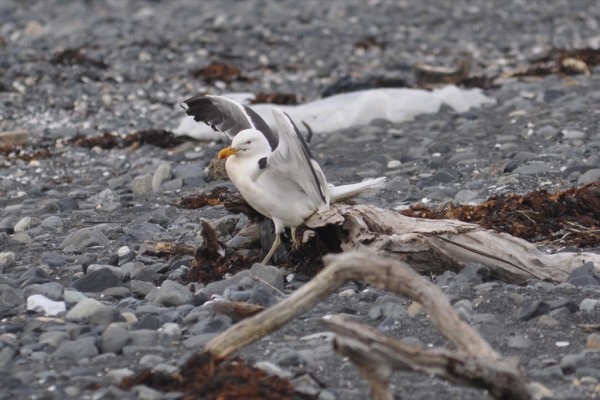 “What’s the matter with that gull?” I wondered aloud. 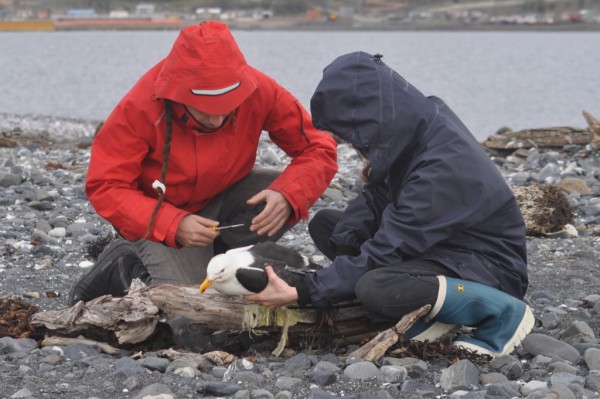 When we reached the gull we found that its leg was trapped in a piece of wood. The poor thing must have been standing there, hopelessly ensnared, for a couple of days. It was quite weak. 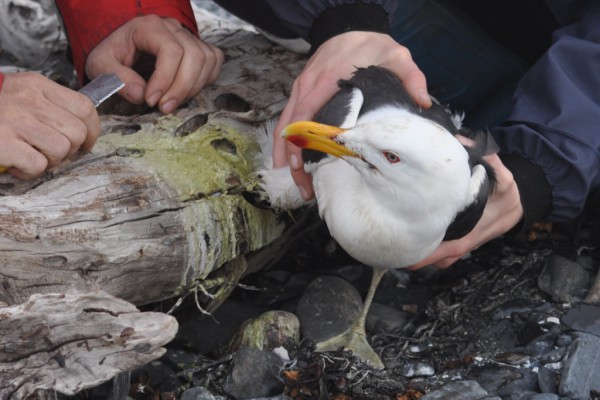 Heaven only knows how it came to fall into this situation! The leg was so tightly jammed that Gean broke his diving knife trying to prise the crack open. And the bird had been fighting so hard to get free that her leg was completely smashed. There was a lot of dried blood. One side of her beak was also injured where she’d rubbed it against the log. What a panic she must have been in! – and now she surely thought that her days were up; three predators had found her and were taking her away. 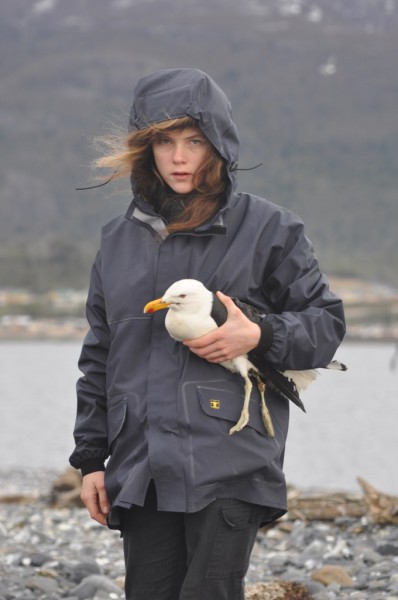 Luckily for her, the kelp gull had actually fallen into the hands of a seagull aficionado. As regular readers will know, Roxanne once raised two gulls and wrote a book about it.

IF YOU’RE SQUEAMISH YOU MAY WANT TO SCROLL QUICKLY PAST THIS NEXT PHOTO! 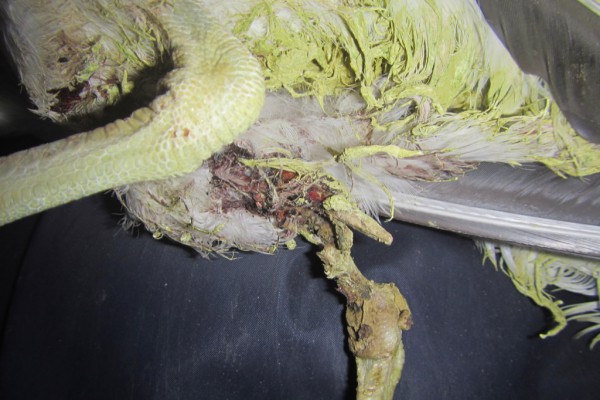 Back aboard the boat we were able to take a good look at the gull’s injuries, and we found that they were pretty horrific. She’d almost succeeded in breaking her own leg in two – only a tiny slither of bone remained intact – and in doing so she’d damaged her flesh and had probably lost a lot of blood. It was clear that the leg couldn’t be saved; it would have to be amputated. And then what…?
We phoned the vet and left a message, but she didn’t get back to us.
Our friends all told us that we really ought to put the bird out of her misery. “A one-legged seagull won’t be able to stand up,” they told us. “And it will never be able to take off; gulls have to be able to run to take off.” “Besides,” said someone else, “it will never survive the surgery. Have you ever amputated a leg? No, of course you haven’t. It’s not just a case of cutting it off, you know! The bird will probably bleed to death; and even if it doesn’t bleed to death the wound will certainly become infected.” “You should just wring its neck,” they told us.
But the bird didn’t look as if it wanted to have its neck wrung. On the contrary; it looked to be very fearful of death. It didn’t seem to be in pain, it was very thirsty and eagerly drank the water which we offered, and when we begged a beef steak from a friend it scoffed the lot. So… we decided to bite the bullet and operate. 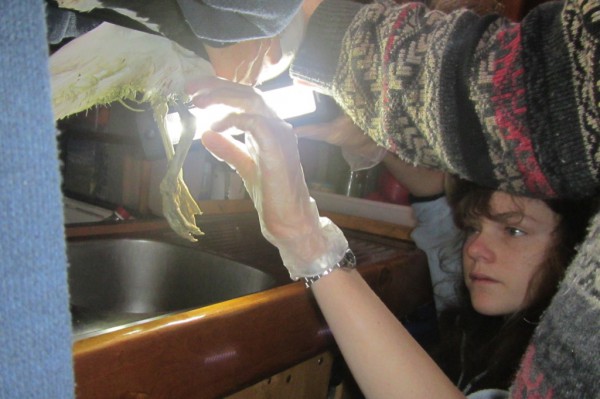 When I say “we”, I mean she; Roxanne decided to operate, the following morning. I cleaned and sterilised the kitchen scissors, the razor, and the draining board, but ’twas Rox who had the nerve to do the actual dirty deed.
Gean held the bird; Nick held the beak shut; I held the torch – and Roxanne got down to business.
One hard snip through the last bit of bone, and a bit of cleaning up with the blade, and it was all over. The bird was very brave about the whole thing – she struggled, but she didn’t go into a full scale panic – and afterwards we gave her a bath in a laundry tub filled with seawater and disinfectant, and we anointed the whole area with iodine. Then we offered her another steak, and she wolfed it down.

The bird spent the rest of the day and the following night in a large plastic box in the aft cabin. It was the biggest box that we could find, but it wasn’t big enough. We didn’t like the fact that she had to sit there in her own shit (because she couldn’t stand up on her one leg) so on the following morning we decided to let her go. 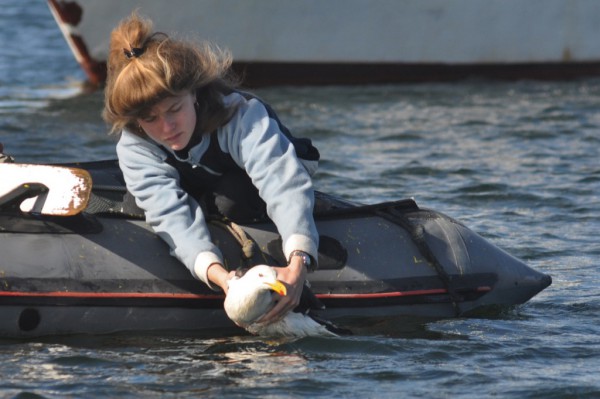 Unfortunately, however, she didn’t go. 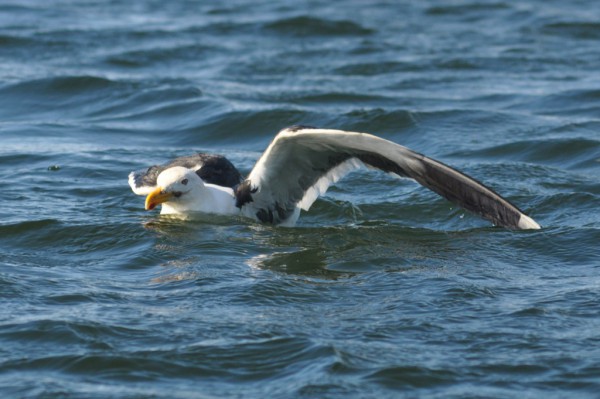 There was a good breeze, so that we’d hoped she would be able to take off from the water, but although she was eager and flapped like mad, she didn’t make it. She seemed very low in the water. So, we had no choice but to go after her, scoop her up with a big long-handled net, and bring her home again. She was so sad and exhausted that she didn’t even struggle.
“Poor old Stella,” said Nick.
“Who? Stella…?”
“Well, she was a one-legged gal too, you know… Stella McCartney.” 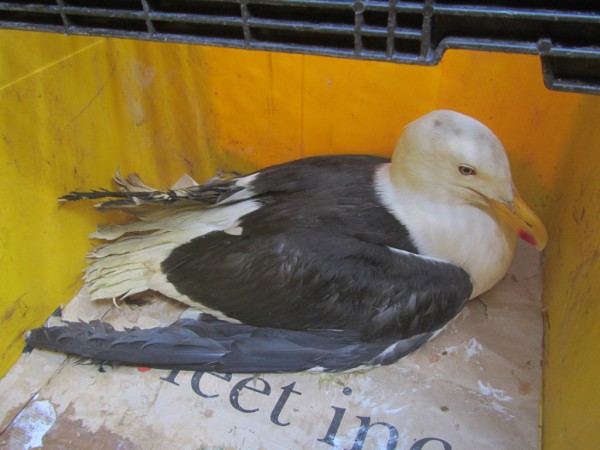 So, poor old Stella went back into her little box. What a sorry sight she was, with her wing tips and tail feathers all rumpled. I said, “If she’s going to be able to survive she’ll need her flight feathers to be in the best possible condition…” 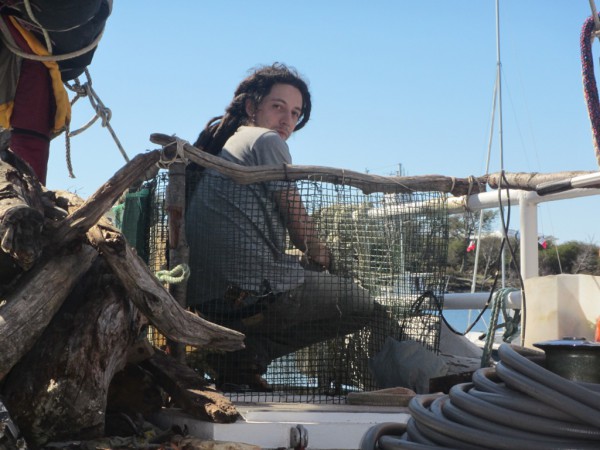 So Gean promptly went on deck and built an aviary, using wood from the firewood pile.
The gull spent the next two days in this cage on the aft deck, and with room to spread her wings she soon learnt to balance on her one leg. She ate two more steaks and two tins of tuna, given to us by another yotty, and on Monday morning we decided that she was now fit enough to have another go at rejoining her flock. 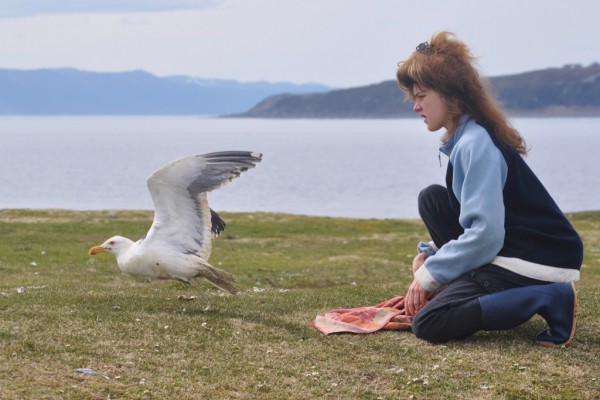 This time we took the gull to the beach where she was found, just about half a mile from the boat. Roxanne settled herself atop the grassy bank where the birds are wont to stand, and she unwrapped our feathered friend, and scarcely were her wings free than Stella went hopping across the turf. 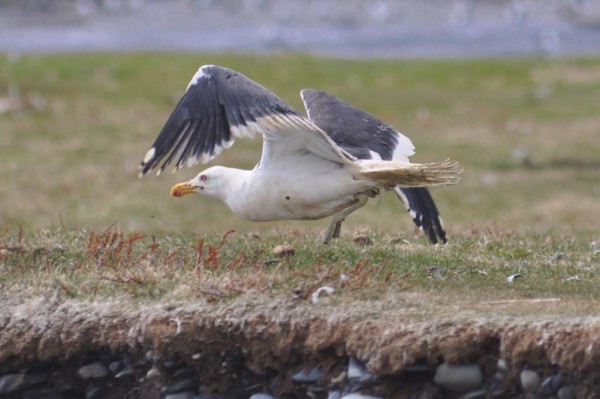 Will she make it…? 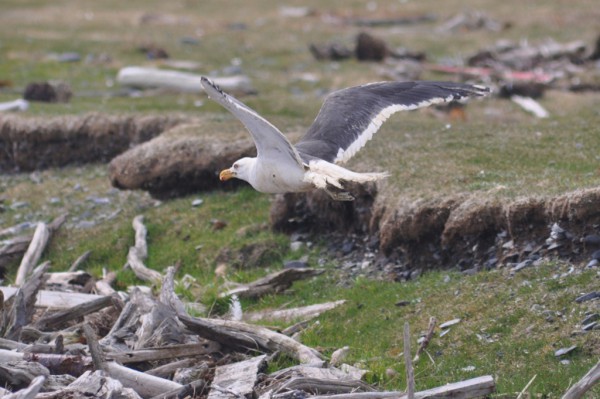 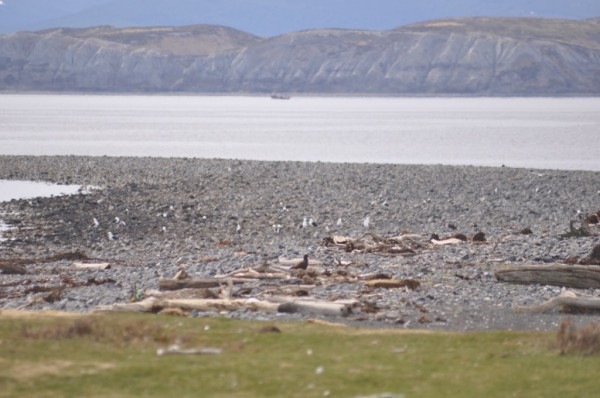 The gull flew along the beach and we watched her land amongst her kin. She wobbled a bit on landing, causing her neighbours to glance round, but she soon gathered herself together and stood as majestically as they, on her one leg.  She’s the one just to the right of centre, and to the right of the seagull couple, facing towards the camera.
Gulls mate for life, and if her hubby hasn’t written her off as dead and gone he’ll be around, somewhere, and he’ll be delighted to have his gal back. She’s probably blown it so far as raising a brood this season is concerned, but at least she’s able to be with her friends and family and live the life to which she was born – and all thanks to the skill and compassion of Roxanne and Gean.

If you want to know more about the book which Roxanne wrote when she reared those two other gulls, follow this link. 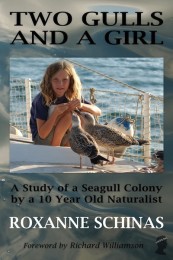