Please see the introduction to this article, by Jill.

I have always wanted to sail, but I never knew what sailing would be like, and I think that until one year ago I had never been on a boat. My first experience of sailing was last year with a friend who worked as a skipper in a marina in Israel. We took a family out on a day charter. At the start it looked like they enjoyed it, but after half an hour most of them felt seasick and were throwing up. I enjoyed the sailing, but I didn’t really get used to the motion of the boat. I think that you can’t really know the feeling of sailing before you go on a boat.

So this year I planned to go to learn capoeira in Crete, and I really liked the idea of sailing there. So I went to the marina in Tel Aviv and I asked people if they were going to sail to Crete.
It was a very depressing day, not just because I didn’t find anyone, but because all the people I met scared me about seasickness and about people I wouldn’t want to be stuck with alone on the boat. But after two days I found a family with six children who lived on the boat, and were supposed to sail to the Canaries and stop in Crete on the way.

This was the first time I heard of a family that lives on a boat. The father told me I could join them, and I was extremely happy. I was so excited that I called him every day to ask when we were going.

For two weeks, he told me every day that we would leave the next day, and I didn’t know the Sea People before and didn’t know that there are some people whose plans and time could be worse than mine! Anyway, in the end he told me that he was very sorry, but their plan changed and they would stop in Turkey and not in Crete. All my dreams were dashed to pieces. From then on I was looking for a boat to sail on.

In the last six months I worked in Israel to save money for travelling in Brazil, where I wanted to learn some more capoeira, and I never imagined that I would find a way to sail there. I didn’t want to take the risk of going to Spain and looking for people who would sail there, because I was afraid of getting stuck there. I looked on the internet, but I didn’t find anything.

One day, just before I was going to buy a flight to Brazil, a good friend called Adam wrote to me saying that he had sailed with a family who were going to sail from Cape Verde to Brazil, and there was a chance that I could join them, so I wrote to them straight away. I didn’t want to hope too much, after my previous experience, and I didn’t really believe I would have this luck. But the family wrote back to me, and slowly things began to take shape, so I took this chance and after two days I was already on the plane to Cape Verde.

Suddenly I realised I didn’t know anything about this family except for some things I read on their website, and I didn’t even know if I would be seasick. I met Jill, Nick, and Roxanne in Mindelo just before they were about to have a capoeira lesson, so it was already a fun start for me. After that we went to eat, in a bar, and everything was normal, but after the dinghy trip to the boat everything was new and strange to me, because I realised that the family really lived on the boat.

The boat doesn’t look big from outside, but you can’t imagine how many things can be inside. I would have thought that you needed to only take the essential things on the boat, but I found a guitar, a saxophone, a djembe, a harmonica, a xaphoon, a button accordeon, bongos, a darbuka, another guitar, souvenirs from all over the world, lots of books, lots of boxes with Roxanne’s pet insects in them, a garden with tomatoes and chillies, a canoe, two windsurfers, a dog… and lots of other things.

The floor in the boat is always moving, and I think they don’t understand how weird it is for other people. We spent a week in Mindelo, and I started to get used to the movement. [Note: The anchorage in Mindelo is very flat, and so far as we are concerned there is no motion to speak of! Ed.]

Slowly I started to know the family better. I liked to hear stories about the sailing, and the countries, and how the children grew up on the boat. I could get a history lesson from Jill, a science lesson from Nick, a Natural History lesson from Roxanne – and Caesar would correct them any time they said something that wasn’t quite right. [Caesar also took it upon himself to correct Miki’s use of English – so, in revenge, she gave him lessons in Arabic.]

I learnt to take advantage of everything and waste as little as possible, to use rain water, to get electricity from the wind and the sun, to never throw away any food. The most amazing thing is to move with the wind and not to be in a hurry.

My next adventure was the first sailing, from Mindelo to Brava. I can’t say I enjoyed it. The experience was so unusual that my head couldn’t digest all the new feelings. If I had been alone on the boat I would have thought every minute that it was going to capsize, but everyone around looked so calm that I even managed to get to sleep in the night.

We had a very good time in Brava. Jill and Nick had come back after 17 years and the people still remembered them! I noticed that they always knew which people to make friends with. Maybe it’s because of all of their travelling.

So we cleaned the bottom of the boat, we bought food for the trip, we filled the jerry-cans with water, and I thought it would be very complicated to get ready for sailing. But then, one day we suddenly went, and after a few hours we were already in the ocean, and there was no-one except for us.

I felt that we were moving, but I had no idea how fast. I felt a little bit seasick, and the waves made me very tired, and most of the time I thought about what I would do for the next two or three weeks in the boat, and what would happen if suddenly I wanted to go back. [Going back would not have been an option. The ocean winds and currents don’t work like that.] 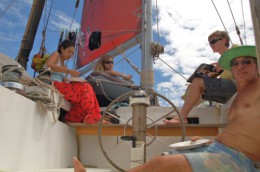 For the first week I was still worrying about all these things, and I thought that if I did a lot of things the time would go faster. But then things changed in my head, and I found myself sitting all day, looking at the sea and enjoying the feeling of the waves.
I liked to see on the chart every day how much we were moving; to watch the sun going from east to west; the moon getting bigger; and our bananas which were green becoming yellow. Everything felt like it was changing together, and so were we.

Everyone in the boat has to do watches, to see if there are any ships around, and more importantly, to keep watch for dolphins, whales, or even birds, which are still exciting even if you have seen them before.
[Ahem… Miki, we hope that you were also taking note of any wind changes and keeping the boat on course…]

The sun is setting and Caesar pours the grogue. Roxanne is in the galley cooking a fish that we caught. Jill is sewing the Brazilian flag, and Nick is doing something in his secret machine room.
And the days are passing, and the memories from each day are mixed up with other days. And then, suddenly, we were already close to Brazil.

We thought that tomorrow we would get to Brazil, but the current took us back and I understood that there is no point in making a lot of plans because the weather changes and you can’t decide everything. Maybe it’s more important to listen than to decide.

In the end we got to Brazil three days after we thought. After three weeks in the ocean I saw people, boats, houses, and smoke.
But we were not in a hurry to go to the shore. Although I had waited so long to arrive, I suddenly missed the sailing again.