Oilies have come a long way since I was a kid. Way back then, we wore either heavy-duty canvas smocks or stiff, plastic-coated cotton ones. I guess the plastic-coated cloth must have been the hip new thing. Next to come along were thin nylon jackets more suited to trekking in a light drizzle than to fending off buckets of seawater, but the quality of these garments rapidly improved – the nylon cloth became thicker and more waterproof, and the design became more ergonomic – until, by the 1980s, sailors could weather the storm in comfort in a tough, cosy oilskin jacket with matching chest-high trousers.

Since then the colours have become trendier, the cloth has become even more high tech, and prices have rocketed.
A set of ocean-grade oilskins can now cost as much as £900.
But are these top brand oilies really any better than the cut price ones, or are we yotties being fed a load of hype and taken for a ride? Your impecunious correspondents set out to discover the truth of this matter.

Over the course of the past twenty years or so we have been through quite a few Musto jackets, and similar well-known-brand jackets, without ever actually being wholly satisfied with any particular product. Thus, when the time came to replace them we again we decided to do something different. We decided to put our trust in the cheapest seemingly-tough and seemingly-waterproof oilies that we could lay our hands on – namely, we decided to buy the Tribord sailing jackets marketed by the French sports mega-store, Decathlon.

If you have never heard of Decathlon you must have been hiding away inside the UK. In any event, you evidently haven’t been hopping across the channel on the ferry and touring Europe. Almost every other city in France and Spain now has a Decathlon store dominating its shopping centre, and there are also shops in other countries.
Decathlon stocks pretty much everything that anyone could ever want for any kind of sport; everything from footballs, walking boots, bows and arrows, skis, fishing tackle, ballet shoes, and bicycles, through to lifejackets, canoes, windsurfers, diving bottles, bailers – yes, and oilskins.

Decathlon Tribord oilskins carry a pictoral label which appears to state that their fabric is both waterproof and breathable – like the fabric used in the leading brand outfits – and they also possess all of the other features which have evolved, over the course of time, in the creation of the modern heavy weather sailing jacket. They have tall furry-lined collars, copious hoods, hand-warmer pockets, drawstring hems, and double cuffs fastened with velcro. So far as we could see, they were exactly the same as the top name products – and yet they were only a fraction of the price.
Could they really be just as good – or were we missing something?

Before I go any further, I think I ought to clarify, or qualify that last sentence. When I say, “just as good” I ought really to be saying, “Could they be any worse?” – because, to be frank, we have never been very impressed by our fancy-price oilskin jackets. There is no denying that they are comfortable enough – or at any rate, they are comfortable for walking down the jetty or sitting about on a chilly day. And they are also waterproof – at least for the first season.
But after one season’s use our Musto oilies have always become distinctly permeable.
And when worn in extreme conditions, with the hood clamped down, they become distinctly uncomfortable. Nick and I both find that after an hour or two of standing at the wheel with the Musto oilskin hood tightly fastened, we end up with a crick in the neck.

One solution to the oilskin problem is a tough PVC outfit of the type worn by fishermen. These oilskins are totally un-sexy, to the point of being ugly, but this is the last thing that ought to concern the sailor; after all, who is going to be watching while you stand there, taking the waves over your head?
Nick and I both own Guy Cotten (Cires Cotten) yellow PVC chest high trousers and we would never swap them for any other kind. Despite the fact that they are somewhere around 30 years old they are still so waterproof that we can happily sit down in a puddle.

If you want to follow the same course, be sure to buy only the very best quality PVC oilies, and be sure to buy chest-high trousers, or salopettes. The thinner kind of PVC oilskin tears quite easily and is also less windproof. And plastic trousers with an elasticated waist are horribly uncomfortable.

When the time came to equip our growing son with a full-size set of oilies we couldn’t get hold of any Guy Cotten ones and so we bought the next best thing – a pair of tough plastic salopettes of the kind used by Spanish fishermen. These trousers were significantly cheaper even than the French ones (the French manufacturer having discovered the possibilities for marketing their product in the chandelries…) and, thus far, they have proved to be just as good.

Why pay more? Why buy a set of trendy, multi-coloured nylon waterproofs when you know that they won’t do the job so well for even a tenth of the time?

Nick also owns a plastic-coated Guy Cotten jacket, but even he, with his anti-fashion mentality, has to admit that this jacket comes a poor second to the cosy, yachtsman’s oily. Although the cloth is totally waterproof the cuffs are not, and nor is there sufficient protection for the neck and face. Fishermen evidently don’t stand around, gazing to weather and letting the seas break over them.

So – coming back to the nitty-gritty – how do the cut-price Decathlon oilies fare?

It was around two years ago that we made our purchase, buying identical jackets for the skipper, the Admiral, and the Midshipman. The Naturalist was provided with a miniature jacket and matching oilskins – but Xoë missed the spree; she had already been kitted out a year earlier.
Over the course of these past two years we have worn our oilskins in some fairly rough weather. We wore them throughout our chilly sail down from the Med to the Canary Islands, a year ago; we wore them during the gale which forced us to stay at sea for an extra day after our arrival there; and we have regularly worn them in winds of up to force 7, with seas occasionally breaking over the cockpit and over the helmsman. So, we are in a position to give them a full appraisal. 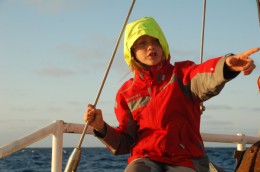 Essentially, the Decathlon jackets have lived up to our expectations. They are no better and no worse than we imagined they would be.
Caesar’s and Nick’s are no longer wave-proof – but they are at least as waterproof as other oilskin jackets would be, in our experience, after this length of time. My jacket and Roxanne’s are still fine.

Meanwhile, the jackets are no more and no less comfortable than the more expensive ones. Some of us are less keen on the hand-warmer pockets (which are positioned higher up than than they were on our Mustos) and Nick and I still find that the hood is a pain.

Are we the only ones to have this gripe about the oilskin jacket hood? And if not, isn’t it time someone came up with a solution? I spend a lot of time musing on the problem while I fiddle, ceaselessly, with the toggles, aiming to find a position where the hood will be tight enough to keep out the draughts and the water but loose enough not to clamp my head down on my spine. When I’ve got it worked out I will patent the idea and sell it to Decathlon, and finance our travels from the profit…

The other thing that we would like to see in production is a PVC jacket, of the Guy Cotten / Cires Cotten type, but with all the features which make the modern yachting jackets so comfortable – the furry collar, the velcro on the cuffs, the hand-warmer pockets, and so forth. Such a jacket would be both cosy and impermeable to the sea.
No, it wouldn’t be “breathable” – but, so far as the average cruising yotty is concerned, very little of our time is spent grinding winches or rushing up and down the deck; most of it is spent sitting still. Thus, the lack of breathability would be a very small price to pay for total and near-permanent waterproofness.

In the meantime, if we find ourselves needing to buy any more oilies in the near future we will certainly be shopping again in Decathlon. Other supporters of this brand include a friend who spends his whole life out on the water, sailing his own very lovely but rather wet little vessel, and delivering other people’s yachts across the seven seas. Whereas the superstar sailors, after their spin around the globe, are issued with shiny new waterproofs, Shane’s jacket looks as if he has been living in it for several seasons. There can be few people who are better placed to test such a product – and he reckons that Decathlon oilskin jackets are “at least as good, if not better than any other brand”.