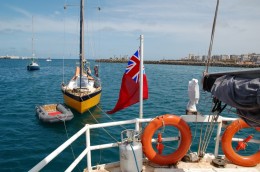 What do you think of our new dinghy? It matches the mothership quite nicely, doesn’t it?

There we were, one quiet afternoon in the anchorage in Las Palmas. Or at least, we were being quiet; the anchorage itself is never very quiet because it is part of “the busiest port in West Africa”. Ships come and go; tugs rush up and down like terriers off the lead, and pilot boats speed to and fro officiously. Besides all that, this was a sunny Sunday afternoon, and so the adjacent town beach was thronged with screeching kids, and hollering mums, and rowdy dads. (And some quiet ones, too, I suppose… but it didn’t sound that way.)

Regardless of all this, we, personally, were having a quiet afternoon, and we were about to sit down quietly to a late lunch when the skipper happened to pop his head out of the hatch. And he said, “What’s the French boat doing?”

Now, this was a daft question to put to the rest of the crew, as we were still below and so could not possibly know what any of the other boats were doing – but, actually, the enquiry was not addressed to us; Nick has an annoying habit of discussing things with himself (the poor old thing).
“It’s coming our way,” he continued. “No… It’s going to hit the catamaran! It’s going far too fast! But there’s no one aboard. How can that be? And it’s still got it’s anchor down.”

“What? How can it be underway but still have it’s anchor down? What are you talking about?”
But instead of answering, Nick merely scuttled away, and by the time I had reached the deck he was in the dinghy and rowing hard.

I looked around, to see a ship’s boat, filled with fat men and women in swimwear, towing a small yacht; and, sure enough, the yacht still had its anchor chain leading down into the water. This seemed odd, to say the least. Worse still,the occupants of the ship’s boat didn’t even seem to realise that they had the other fellow in tow.

Quite how the ship’s boat came to have hooked itself onto the yacht’s chain, and with what part of her anatomy, was not clear at that moment, but having realised that this was not an attempt at theft, nor even an act of deliberate vandalism, we could see that this was, indeed, what had happened. When informed of the error of their ways – with loud shouts and much arm-waving – the people in the boat still did nothing; still didn’t even stop; still didn’t seem to understand why that yellow thing was following them, nor why they should care.

Fortunately, before they had gone a hundred yards the yacht broke free; but having done so she then set off on a trip around the anchorage. All alone, and very prettily, she reached, bore away, gybed, ran, and then rounded up again. It is amazing how a yacht will sail under bare poles. A clear demonstration of the fact that the keel not only serves as a counterweight to the sails and a device to prevent leeway, but also creates lift…

Luckily, Our Hero was on hand to salvage the runaway before she got herself into any mischief, and while the guilty party disappeared (still none the wiser, as it seemed) he called upon the assistance of some Spanish yotties passing in a small RIB, and together they brought the prize ship home.

And that’s how we came to have a matching tender tied astern.

But why, you may ask, did we put her there? Why didn’t Nick just re-anchor the yacht?
The answer is that the person who anchors a boat is legally responsible for her safety thenceforth; that’s why.
We didn’t mind being responsible for the knots which we tied in our own good strong warps, to the Frenchman’s bow, but we did not want to be held to blame when his rusty little hook and dog chain let him down for a second time.

When tying the yacht astern of your own is not a feasible option, the next best course is generally to leave her own anchor hanging over the bow, just as it was, and put out a second . His second, if he has been kind enough to leave it ready, or one of your own spare anchors if he hasn’t had such forethought.

I must also point out that, had the boat been a local one we might have thought twice about “interfering”. The Spanish are funny about this kind of thing – they seem to prefer an insurance claim to the attentions of an outside party – and we have heard of salvors who, having done their best, were then accused of theft.
Happily, the Cruising Crowd are not like this; we know that we depend upon each other. We’d never met the chap who owned this particular boat, but we’d met a hundred others just like him. We knew that he had no insurance; we knew that he didn’t want to come home to find his pride and joy in pieces – and we knew he would have done the same thing for us.

In point of fact, the Spanish who helped Nick to tow the boat to safety were somewhat unhappy about leaving it tied astern of Mollymawk.
“Who were those comedians? “Nick asked them, as they prepared to flee the scene of the crime.
“Domingeros,” they replied. Sunday trippers.
Oh! That lot..! Again.

It is very annoying, when one has anchored one’s own boat properly, to have some bunch of incompetent trippers come and mess things up; and yet this happens all too often, especially in Spain. We saw it happen a dozen times or more while we were in the Mar Menor, and it happened twice to our own anchor.

On examining the Frenchman’s tackle we realised that, on this particular occasion, the miscreants had simply motored across the yacht’s anchor tripping line, wrapping it around their rudder. And the line had subsequently served its purpose… to the letter.

[For those who don’t know, a tripping line is a string fastened to the further end of the anchor –  that is to say, the end opposite the chain –  which can be used to “trip” the thing out if it has somehow become fouled. In our experience, anchors very seldom do become fouled,  and when they do it is usually the tripping line which has fouled them. We consider this to be one very good reason for never using a tripping line-  and this event provided another reason.]

More usually the Sunday Tripper trips the innocent bystander’s anchor by dragging his own hook across their chain. Of course, if your anchor is worthy of the name it should reset itself. Our Bruce manages the trick; or at any rate, it always has done so far…  Still, the sabotage effected by the floating land-lubber is very annoying, particularly as he never even seems to realise that he has sinned, and actually resents suggestions as to where he might go or whose son he might be.

It could, of course, be a lot more than just annoying. If no one had happened to be looking out during those particular five minutes of misadventure, the French man might have returned to find his boat on the rocks.

Would-be visitors to Las Palmas (Gran Canaria) please note: this is the second time during our stay here that we have seen a boat drag as a result of someone else’s ineptitude. Nor is this the only potential problem here. The day after these events, after the French man had collected his boat and re-anchored her, Nick saw some youths swimming out to climb aboard; and so he had the chance to save her for a second time.

So, that’s two beers that the young monsieur owes us!