We are thrilled to be able to announce the publication of two books, one by Jill and the other by Roxanne. 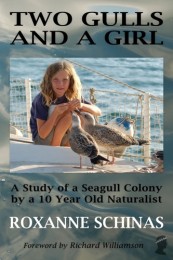 Two Gulls and a Girl
by Roxanne Schinas

Two Gulls and a Girl is Roxanne’s account of her survey of the seagull colony on Isla Perdiguera. Regular visitors will already have seen most of this work, but in piecemeal form. Now you can read it in the comfort of your arm-chair / bath-tub / bed / boat / aeroplane … or wherever you happen to be.

In order to keep the costs down we have had to convert the photos to black and white – but to make up for it we have added a few more. All told, there are 89 photos and three drawings. 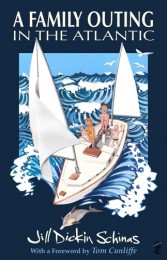 A Family Outing in the Atlantic
by Jill Dickin Schinas

A Family Outing in the Atlantic is Jill’s account of the seven year long voyage which we made in our previous boat. It begins at the beginning and ends at the end, when the yacht was capsized and we all had to be rescued by the RAF. (All except Roxanne, that is. She wasn’t born – but she wishes that she had been.)

This manuscript has been sitting on a shelf for a long time while we get on with the business of having more adventures. Before releasing it into the world I gave it more than a dusting down; it was completely revised and revamped, in order to make it more accessible to readers who may not know very much about sailing.

To quote from the press release:

This book is no mere travelogue. Woven between the tales of ocean storms, shoaling turtles, and West African natives in grass skirts is a vivid picture of an alternative and very independent lifestyle. For a family meandering about in the Atlantic there are no schools, no supermarkets to pop into when the larder is bare, no newspapers or TV, no rules – and, as often as not, no one to turn to when things go wrong. …

There is much here that will be of interest to other yachtsmen and other travellers – the information about West Africa is particularly valuable since very few other yachtsmen have passed this way – and there is heaps which will appeal to other families seeking to turn away from the well-marked main channel and set a course of their own.

In the words of Tom Cunliffe, who penned the foreword:

Casting fate to the ocean winds without visible means of support in the third millennium demands a lot more guts than ever it did thirty years ago. Keeping going, despite producing three fine children and surviving a capsize off the Falklands that ended on the winch cable of an RAF helicopter, shows the true spirit of seafaring… The Schinas family are talented people … but the overriding feature of all their lives and the guiding spirit of this book, is their self-sufficiency and courage to make their own choices, come fair weather or foul.

Beautifully illustrated with the author’s own ink drawings, A Family Outing in the Atlantic will keep arm-chair voyagers amused and entertained, and at times will even put them on the edge of their seats, but it is also a veritable handbook to the cruising lifestyle and, as such, is essential reading for anyone dreaming of setting off over the horizon.

Anybody who is interested in knowing more about the books can hop across to the publisher’s website.

The books can be ordered via us – and if you buy the books via us rather than from a bookshop such as Amazon, we make more money without it costing you any more. (In fact, since many bookshops seem to be charging more than the RRP, it could easily cost you less to buy the books from us!)

If you do decide to buy directly from us, prices will be as follows :

Delivery prices vary slightly according to the destination country and which book you order (A Family Outing is considerably heavier than Two Gulls and a Girl), but within the UK and Europe it will be between £2.50 and £4.50 for a single book, and slightly more for two.
After we have processed your order the wheels will be set in motion and the book should arrive within 7 working days in the UK, or 10 working days in the rest of Europe.
If you don’t mind paying an additional 21p for Two Gulls and a Girl, or 53p for A Family Outing in the Atlantic, it is possible to expedite the order, reducing these times by three days.

You can pay in any currency, using PayPal. (We prefer pounds sterling, as PayPal charge us a bigger commission on other currencies.)

To order copies of either book or both, please send us a message using our contact form. Be sure to include your name, address, and phone number. We will send you a PayPal invoice by email, and when we recieve the payment we will tell the publisher to send the books out.