Well, almost a year has passed since we slipped the boat and slapped on a coat of copper antifouling. So, it’s time we let you know how things are doing down there, under the water.

To recap: Before we built Mollymawk we used to own a GRP yacht, and a year or so before we sold her she was painted with Copperbot, the original copper-impregnated epoxy antifouling. This type of antifouling is said to be less damaging to the environment than any of the metal-leaching kinds, but it was a very new thing at that time and we knew that we were taking a gamble.
Happily, the gamble paid off; that copper paint was fantastic. The boat once spent three months in a French marina renown for its fouling, and while the other yachts all acquired lush gardens and pet eco-systems on their undersides, our boat stayed absolutely and perfectly clean! 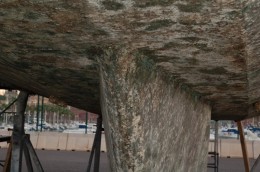 Unfortunately, that paint was also very expensive, and when we came to launch the new boat we simply couldn’t afford to give her the same treatment. So we mixed our own antifouling, using two kilograms of copper dust to one litre of epoxy (which is the legal, environmentally safe maximum).
That home-brewed copper-impregnated epoxy worked, after a fashion, but nowhere near so well as the real thing. Thus it was that, eight years on, we decided to make the necessary investment. By this time the founder of the Copperbot company had died, but his formula had been bought by the main sales agents, Aquarius Marine. Aquarius are now producing the same paint but under a slightly different name – Coppercoat – and thus it was that we came to be slapping on genuine Coppercoat antifouling.

Actually “slapping on” is not the right terminology for the long and elaborate process of painting a boat with Coppercoat. Other, more conventional antifoulings can be applied over pretty much any other muck – having bought the paint one simply opens the tin and starts daubing – but the application of Coppercoat is such a fine art that the manufacturers even supply an explanatory DVD. We watched it, and then we followed the instructions to the letter. 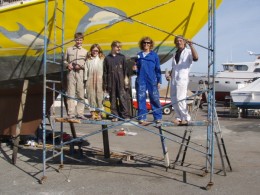 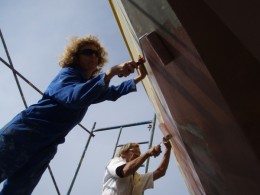 First we spent a week preparing the hull, removing every last vestige of barnacle shell from our previous coat of home-brewed copper antifouling. Then we mixed the epoxy and stirred in the appropriate quantity of copper powder, using an electric drill as a whisk. After that we applied the necessary coats, at the appropriate time intervals, four of us working at this task while the fifth member of the crew was permanently employed in stirring the paint. Then we waited, with one eye on the sky – because the new paint had to be kept absolutely dry for the requisite interval. Then, finally, just before Mollymawk went back in the water, we burnished the hull, thereby exposing the copper. 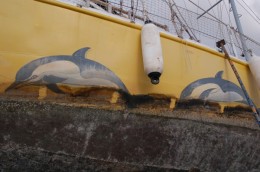 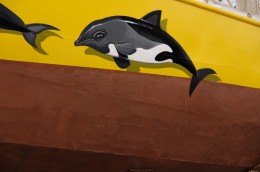 While we were working on the boat various other yotties came to watch. “Why are you going to all this trouble?” they wanted to know.
We explained that Coppercoat is (allegedly, at any rate) far less damaging to the environment than conventional antifoulings. It appears to have the approval of the UK Environment Agency, who applied it, ten years ago, to a 10m RIB. According to their spokesman: “It doesn’t harm the marine life but just stops adhesion of growth.”

Moreover, although it costs more than twice as much as conventional antifouls our efforts would pay for themselves in the long run. The usual paints leach toxins into the environment and so are gradually used up.
“If you’re still using that old-fashioned poison,” we said, “then you’ll have to slip your boat again in a year or two. But our copper bottom will last far longer. With any luck, we won’t have to slip again for another ten years!” 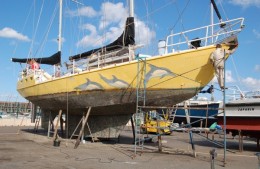 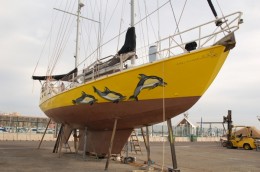 Copper-impregnated paint is coppery-pink when it goes on, but within two or three days of her launch Mollymawk’s antifouling had taken on a dark green hue – and so we knew that the metal had, indeed, been successfully exposed to the elements.
We sat back. It had been a gruelling fortnight, and the extra expense had been burdensome too, but we knew that it was all worthwhile.

Nine months later – well, to say that we were disappointed would be a grave understatement.

Our new Coppercoat antifouling is being tested alongside a strip of Hempel’s antifoul, a strip of our old home-brewed copper-epoxy paint, and a band of household emulsion paint which was saturated with hot chilli powder. These other paints (and a couple of combinations of these paints) were applied late last summer to our self-steering rudder. 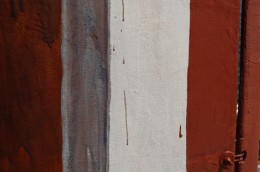 The first photo shows the rudder as it was when first painted, last September.
From left to right we have, firstly, our own copper-epoxy mix with a dash of chilli powder added. Then we have the same copper-epoxy on its own. In the middle of the rudder we have a broad band of white household paint saturated with chilli powder. Then we come to the Hempels antifouling, and finally to Hempels with a touch of chilli (on the trim tab). 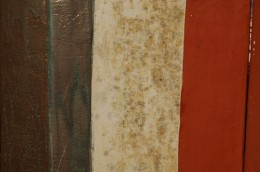 The second photo shows the rudder six weeks later, when the boat was out of the water. As you can see, the chilli-pepper paint is already becoming degraded.

When we slipped the boat we applied the new Coppercoat not only to the hull but also to the upper part of the self-steering rudder, above the other paints, and to the frame which supports the rudder.
The third photo shows the results, eight months later.
At this stage the Hempels and the Hempels-plus-chilli seem to be performing best, but there is plenty of fouling even on those stripes. The household paint with the chilli pepper is now home to several barnacles and a weird red thing. Our home-made copper epoxy and the Coppercoat are both equally coated in slime and tufts of weed. 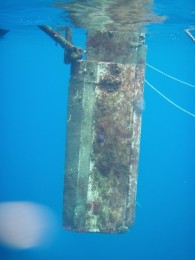 The fourth photo shows the rudder nine months after the Coppercoat was applied (and a year after the other paints).
The household paint with the chilli pepper has clearly failed the test. What a pity that we didn’t think to include a stripe of unadulterated household paint, so that we could see whether the chilli had any effect at all.
Meanwhile, the Hempels antifoul is also faring rather badly. Its antifouling properties have been exhausted.
The weeds growing on the Coppercoat have become a little more luxuriant.
But the home-brewed copper-epoxy actually seems to have shed some of that slime, and both the plain stuff and the stripe with the chilli pepper are doing reasonably well. They are not doing as well as we would have hoped – certainly, they are not doing as well as the original Copperbot which we applied, all those years ago, to our GRP boat – but they are doing rather better than the competition.

The following photographs show various other areas of the hull eight months after the Coppercoat was applied.
Note that the fouling, here in the Canaries, is very far from being the worst that we have ever seen. Indeed, it is nothing compared to the fouling in the Mediterranean. 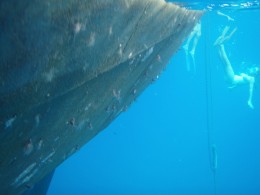 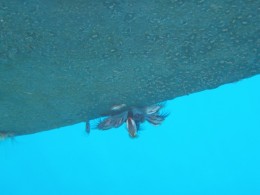 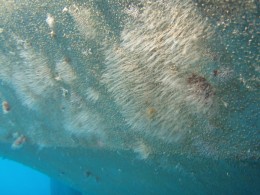 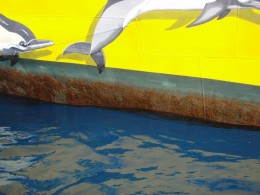 In conclusion, the expensive Coppercoat paint is performing notably less well than our previous, cheap and cheerful home-brewed copper-epoxy antifouling!

So much for 10+ years! Our Coppercoat did not even serve its purpose for 10 months!
But why is this so? It works for some other people – it worked for us when we used it on our previous boat – so why do we now find ourselves having to dive on the hull every month and scrape the waterline on a weekly basis?

Before posting this report we sent it to the folks at Coppercoat, asking for their comments. In return we received a lengthy reply which includes the following especially pertinent remarks:

It would be standard practice (and advisable) to clean a Coppercoat treated boat once a season, but as you might expect, some people clean their boats more regularly than this while others do it less frequently.

We know of owners who rarely need to clean their hulls – and I heard from one owner who did not touch the bottom of his boat for five years! However, at the other end of the scale I know of a client in the Caribbean that dives under his boat and cleans the hull approximately three times a year.

To our way of thinking, if you have to dive on your boat and clean it three times a year, then the antifoul, by definition, is not working. We did not have to dive on our ultra-cheap home-brewed copper-epoxy and clean the boat until she had been in the water for three years.

While Coppercoat offers a strong degree of protection against most fouling in most locations for many years – it is not described as a “maintenance-free” product and periodic cleaning of the hull should be expected.

Please remember that unlike conventional anti-foul (that starts off at full strength and becomes weaker by the day), Coppercoat is actually quite a mild anti-foul when new. Coppercoat increases in potency as the months and years pass. This is because it takes some time for the epoxy to begin to break down and allow the formation and release of its powerful anti-fouling agent cuprous oxide. Consequently it is usual for Coppercoat to perform better in its second year and beyond, than it does in its first year. It is likely therefore that you will see a further improvement in the performance of the coating in the coming years.

The trouble is, we will not see an improvement of this kind unless we can keep the hull clean. Once the barnacles and the white stuff have settled removing them is very difficult, even with a metal scraper. They invariably leave a little mark behind, and new arrivals subsequently find it very easy to attach themselves to these unprotected areas.

Well, we sincerely hope that this is true… but we have our doubts. [See our Apr 2012 update.] 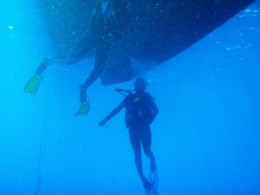 Coincidentally, a friend who painted his catamaran with Copperbot some ten years ago also had a very good experience of that product and has also just repainted the boat using Coppercoat. He is having much the same sort of experience as us, with quite large barnacles already appearing on his hulls after only one month afloat.

If you have used Copper-impregnated epoxy antifouling on your boat we would like to hear from you. Please use the comments box (below) or drop us a line using the contact form.
Besides telling us which particular brand of copper-epoxy antifouling you used and whether the paint worked for you, please let us know where your boat is moored, or where you have been cruising.

For our next antifouling test we hope to be able to review ePaint – a type which leaches hydrogen peroxide into the water. Whilst it isn’t reckoned to be long-lasting, this particular paint is said to be completely sound from an environmental point of view; and if we can find a paint which does no harm but which keeps our hull clean then we will have succeeded in our objective.

For our latest research and observations on this topic, please see The Search for an Effective and Environmentally-Safe Antifouling.