Our latest news will astound any of you who have ever met Poppy-Dog. 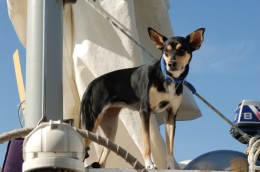 Poppy came to us from a rescue centre in Spain. She is all Xoë’s fault – and she knows it; she adores her mistress.

For years Xoë had been pestering us to let her have a dog, and for years I had been saying, “No. Never. You can’t have a dog on a boat.”
A dog in a house is one thing – and quite a nice thing – but a dog on a boat is a first class nuisance.
Dogs like chasing rabbits and romping around in meadows; at the very least they like to pad up and down the street once a day.
But cruising yachtsmen often spend weeks without setting foot in a meadow or a street.
Added to that, there is the problem of taking the animal from one country to the next. And then there is the toilet trouble: dogs need to do their business in the garden or in the gutter, not in a loo or even a litter tray.
“You can’t have a dog, and that’s that,” I told Xoë.
And when she found a rescue centre which was looking for temporary foster homes I continued to say, “No way.”

But the skipper said, “Okay. You can look after one.”

That was four years and a couple of thousand sea miles ago.

The other reason for not taking a dog sailing is that dogs hate sailing.
However much they may love water, every dog that I have ever met has hated sailing. 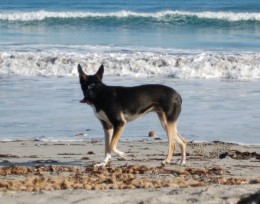 But Poppy, the rescue centre dog, didn’t even love water. In fact, she was terified of it!
On her very first walk, around the boatyard in southern Spain, Poppy pulled her new owner in a wide cicuit around each hose pipe lying on the ground.
When we took her to the beach she ran away, she was so scared of the wet stuff.
And when we put her in the dinghy she did something that ought only to be done in the garden or in the gutter, or in a litter tray (or on the side deck, in the prescribed place…..)

Well, Poppy soon came to love dinghy rides – a dinghy ride means walkies – but she has persistently refused to make friends with the sea; as it lollops past the boat, she leaps away in alarm.
Some of you will have read about The Sea Dog’s Lifejacket. Ever since she was required to test That Thing Poppy has regarded it with loathing; one only has to pick it up and her tail goes between her legs.
Thus, it seemed that we had adopted the most inappropriate mutt imaginable – until we met Chester. 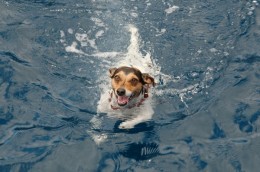 Now, Chester is the real thing: a sea dog who loves his element. We first met him as he and his owner were swimming past our boat. And no cissy lifejacket for Chester, mark you! The little Jack Russel just jumps in and swims like an otter. (He ought really to have been named Tarka.)

Poppy watched Chester with amazement and horror, but she was very keen to make the acquaintance of this handsome lad.
“C’mon Pops.Let’s go swimming!” I fetched her lifejacket. We reckoned that if we put her in while Chester was there, then she might even overlook the nasty wet stuff.
She didn’t – once in the water she ignored Chester completely and devoted her energies to trying to get out again – but perhaps the episode gave her something to think about. The following day when we mentioned swimming, Poppy dog rushed over and stood by the boarding ladder! She was shaking all over as I dressed her in her lifejacket, but it was clear that while some part of her was terrified, another part was eager to join in the fun. I lowered her down gently, and she followed Roxanne in a quick circuit around the boat. 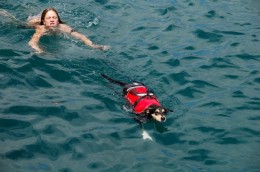 So it continued for the next few days. Poppy came eagerly whenever swimming was mentioned, shook like a first-time parachutist as her lifejacket went on, and then dutifully swam one circuit – and no more than one.
Then, after a week of this activity, she went to the rail one day and, in response to Roxanne’s call, leapt straight in without her buoyancy aid!
She doesn’t float as high without it – she splashes water in her eyes and up her nose – but she doesn’t seem to mind that quite so much anymore!

(We had already noticed that the lifejacket made the dog rather unbalanced. With the lifejacket on she keeps her hind legs tucked up under her – in an effort to control the rolling, one assumes – whereas without the jacket she uses all four legs.)

Points to note, for anyone else who fancies swimming their dog:

1) Try to keep your distance. Dogs can’t stop – if they stop swimming they sink – and if you approach your dog from the front you will get horribly scratched.

2) Dogs swim very fast. I can only just keep ahead of Poppy as we swim round the boat and I am fairly sure that she would overtake me on a longer course. Little Chester also gives his owner a run for his money and a good work-out. However, dogs also tire very easily. Unlike us, they can’t take a break and float (qv.). Hence a lifejacket is still essential in a crisis situation. 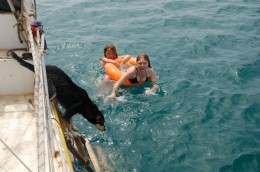 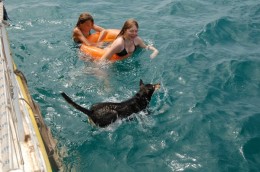 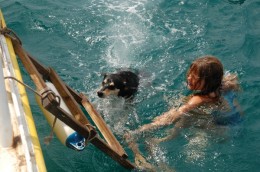 3) Poppy has to be helped out of the water. Chester can manage to get into an inflatable dinghy, but Poppy can’t and nor can she manage the ladder; she nearly can, but she can’t quite. You will need to plan for this event before the dog goes in. 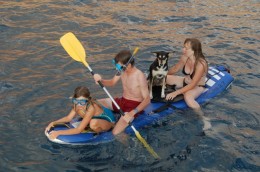 Of course, having a dog which loves to swim is not necessarily a great idea when you live on a boat. Dogs which jump in of their own accord tend to swim ashore.
Twenty years ago, in Cabo Verde, we rescued a large and shaggy dog which was swimming round and round our boat looking up at us with a pleading eye. It subsequently sat on our deck and howled.
The man on the adjacent yacht eventually rowed across and said, “Zat b….. dog! You should ‘av leef ‘im in tha woter to drown!”
Seemingly it was the creature’s regular habit to go jump ship – literally – and then to be unable to identify its home!

Happily, Pops is not the brainiest of dogs, and we reckon that provided we never actually encourage her to swim ashore the idea of doing so will never enter her soft little head.