We now lose a small but much loved member of the crew. 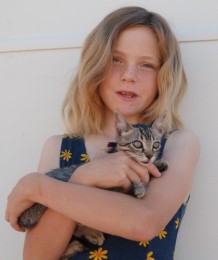 Truco was given to us by Stephanie, a French woman living on another yacht in the marina. She already had a cat of her own. She found Truco in a dustbin with his five brothers and sisters.
“Six kittens, ” she told me in broken English, making a movement with her fingers to show how small they were. “What can you do? So I took the prettiest.”
We never did manage to understand what happened to the other five, and the fate of the one she saved was by no means secure. When Stephanie got home her big tom cat attempted to kill it. So it was that she came to me.
“Would you like a baby cat?”
What could I do?
When Mummy saw what I had done she said to Stephanie, “We can only keep him until we leave La Manga.”
“Yes, yes,” Stephanie assured us. 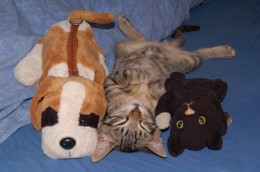 Truco was gorgeous. He was hardly any longer than my hand but he had huge eyes. His ears were enormous too. He spent half the day sleeping on the sheepskin which was on my bed and the other half pretending that he was a tiger. He was quite certain that he was a huge scary tiger! He stalked us and pounced on our feet. He even ran up the walls of the boat. He was so funny!

It was I who trained Truco and taught him to come to his name. I first decided to call him Felix, which means Happy in Latin, but then I found that this was the name of a Spanish cat food. Mummy suggested Poubelle, which is French for dustbin. That seemed appropriate, but it didn’t suit him. Finally I decided on Truco, which is Spanish for trick. It’s a good name because it sounds good when you call it aloud.
“Don’t be silly,” Xoë told me. “You can’t teach a cat to come when you call it. They’re not like dogs.”
“Trrrrruco,” I called, holding out a little piece of food.
After just a morning of training Truco came when he was called. After that I didn’t need the food. After that he always came to me when I called him, which is more than can be said for certain dogs… 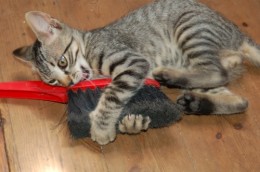 Over the months we watched Truco grow from a tiny baby that you could move about while he was sleeping to an alert cat who stirs if you make the least sound while he sleeps. We watched him grow from a funny, bold, little fur ball into a sleek, serious, very big tom cat.

But all the while Mummy said, “We must find a home for Truco” and then she began to say “Now he has to go.”
“It would be cruel to take a cat sailing,” Mummy told me – and I have to admit that it would.
“Oh, do bring him,” said Xoë. “He’ll be company for Poppy-Dog.”
“No,” I replied “I love Truco, so I want him to have a nice home. Cats that come sailing always end up falling overboard and drowning. Truco wouldn’t enjoy being cooped up on a boat. He likes to go ashore each evening and run around on his territory. He likes to meet other cats.”
As for the dog, whether she comes sailing or not is Xoë’s choice. 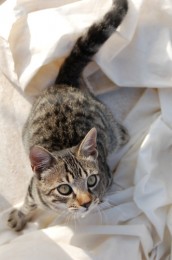 At first we tried to find somewhere lovely for Truco to live. A friend called Sue offered to take him. She already has three cats and two dogs, and she lives in a house on a big farm in the mountains. What a lovely place for a cat! But then we remembered that cats are very territorial. They don’t like being taken somewhere new, and if you move them they try to go home. I couldn’t bear to think of my little cat setting off to walk home across the mountains, and across the motorway, and getting lost and cold and hungry. Truco didn’t need a new home, he needed a new person at his old familiar home. A new person to feed him and provide a sofa for his cat naps.

We went to Stephanie.
“Filo and Truco are friends now,” we told her, quite truthfully. They were so alike that they were almost mirror images of each other, and perhaps that made them like each other. If anything, our cat was the bigger of the two now, so he was probably the Top Cat. “We’ve seen Filo and Truco rubbing noses.”
To our surprise Stephanie said, “Yes, they are great friends now. In the evening Truco comes to our boat and calls Filo to come out and play. I think he eats Filo’s food.”
Aha! So that explained something which had been puzzling us. Often Truco did not return home for his supper.
“Of course I will look after him,” said Stephanie. 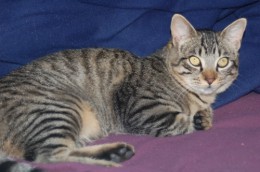 That morning was spent trying to persuade Truco that this other boat was his home, which he didnt like. He kept jumping off the boat whenever I lifted him aboard. We gave Stephanie his feeding bowl and his beloved sheepskin.

Although he was not pleased to be aboard the French boat, Truco was very happy to meet up with his friend. Stephanie and I followed the two cats around as they played. They are so alike that we could hardly tell them apart! When they are standing sideways it really is almost impossible to tell the difference, but Truco has a prettier face, and he is much braver.

That afternnon the cats lay down to sleep, side by side, and the French couple went sailing. When they came back and the boat started to come alongside Filo jumped across the gap and landed on the side deck.
“Trrruco,” called Stephanie.
Truco hesitated, as if to say, “But this isn’t my boat, and you aren’t mine.”
I leant down and lifted him aross the gap.

Stephanie called his name and held out some biscuits. Truco took just one biscuit.
“No tienes hambre, Truco?” questioned the French woman. Aren’t you hungry? Maybe she thought that you have to speak Spanish to a Spanish cat.
She opened a tin of meat, and Truco came rushing to her. 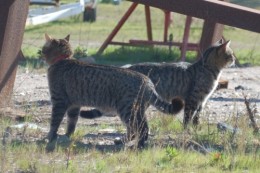 Stephanie and her husband laid their sail on the quay and began to fold it. Truco sat beside me, gobbling his meat down so fast that I feared he would choke, so he could go and play with his friend again. Every now and then he gave a muffled miaow, and Filo answered it. He was prowling up and down the quay impatiently. Then, suddenly he disappeared.

Stephanie and her hustband began sniggering. I glanced around, because when they do this I always have a suspicion that they are talking about me behind my back. I could see nothing to laugh about and was just looking away again when I noticed a whiskered tabby face peeping out from the folds of the sail.

After that the two tabby cats rushed across the quay, following a ball that Stephanie had thrown. It was Truco’s ball, but Filo had obviously played this game many times before. He leapt up and caught the ball in his two front paws! Then he and Truco had a little play fight, standing up on their back legs and boxing each other, very gently. Truco won. 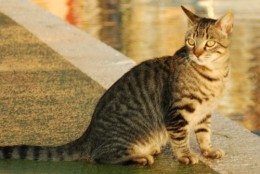 I chose this moment to slip away. Truco started to follow me, just as he always had done before. He always used to follow me everywhere. Once he followed me all the way down the big scary road to a friend’s flat!  It was hard to leave him behind, but I had to so I started to run. He sat down, staring after me with big yellow eyes, silently protesting. Then, after I turned the corner, he turned back to play with his other, furry friend.

Perhaps Truco has forgotten me now. Perhaps he loves Stephanie as he used to love me. I have been back a few times, to visit him, but he has never been at home. Stephanie says that he is fine. I am glad that I chose him a good home, but I feel lonely without him and I often think about him. I miss my little cat.