Here are the answers to our recent, devious quiz.

Thank-you to everybody who had a go, whether on-line or by e-mail (on-line distinctly preferred, as then we can post your ideas…). It seems that we made it a little bit harder than we meant to. I’m sorry to have left you in suspense for so long. We have spent the past fortnight anchored off the island, riding out a succession of gales and storm force winds. Making time for the virtual world of the web is not easy when the real one is being so boisterous and demanding!

Here are the bits and bobs again – this time click on each one to see a photo of the whole creature.

After that you hardly need me to tell you what’s what… but I will.

A is a cone-head mantis whose Latin name is Empusa pennata. The English name is accurate but dull. The French name is diablotin. According to our French dictionary diablotin means imp, and the English dictionary defines an imp as a small devil. So, this fellow is a diabolical little imp! Although he may look mean and scary the imp is actually completely harmless – unless you happen to be a small insect. He catches his dinner in the same devilish way as any other mantis, lying patiently in wait and then lashing out with his saw edged front arms.

B is a common or garden (or household) black cricket. We were quite impressed when you got this one right, Emil. Do you have crickets in your house in New York… or did you used to keep them as pets? Of course, anyone can recognise a cricket under normal circumstances, but this one has just moulted and her new wings are still soft and transparent.

C is a dragonfly. To be precise, it’s a male red-veined darter.

D is an orb web spider. I was hoping that someone would tell us it’s name… ‘cos I’ve forgotten it. In the summer there are lots of these spiders on Isla Perdiguera. Each spider spins a web between two bushes and then she sits in the middle waiting for dinner to rock up. Grasshoppers are the staple diet. Grasshoppers are not very careful about where they leap, and when they land in her net Mrs S goes rushing over at once and wraps them up in a tight silken thread. Within twenty seconds of landing in the trap the careless grasshopper has been trussed from head to toe and is completely hidden. Having immobilised her prey in this manner the spider then proceeds to suck the life out of him.
Isn’t Mother Nature wonderful…? She makes Jack the Ripper seem almost cuddly.

I must have taken hundreds of photos of Mrs Orb Web Spider over the months, and I also have quite a few of her diminutive husband. Some of these are displayed in my photo library. Clicking on the link will take away from this site and directly to the relevant page of my website – so, if you don’t want that to happen, open the link in a new tab! (Instructions for Grand-pa: middle click on the above link or, if you don’t have a middle button on your mouse, right click and then click on Open Link in New Tab.)

E is a crab – but it isn’t the odd one out in this quiz. Crabs are crustaceans, and crustaceans, insects, spiders, and various other creepy crawlies are all arthropods. (Arth = joint, as in arthritis. Pod = foot, as in tripod.)

F is a grasshopper. It’s the kind of grasshopper which gets together with zillions of its friends and relations and goes on a mad feeding frenzy, eating its way across Africa. Moreover, although it can’t bite through human skin, the spikes on its legs are viciously sharp and can easily draw blood – as Roxanne has discovered.
In Africa the people eat these things – but whether they do it as a means of pest control or in revenge, I do not know. Perhaps they just do it  because there’s nothing else left to eat once the locusts have arrived…

G is neither a shrimp nor a snail. It’s the nymph stage of a strange cricket called Acrida ungarica. Roxanne wrote about him in her Life in the Mar Menor series.

H is a photo of two snails mating. Snails are gastropods – not arthropods – so these guys are the odd ones out in the quiz.

I is a praying mantis, photographed taking a stroll on Roxanne’s hand.

J is wasp. She is not the sort which tries to eat your jam sandwich; she is a paper wasp, and she lives in a small colony containing only a couple of dozen cells. This link will take you to a photograph of a paper wasp’s nest – but, like the one above, it will also take you away from this website. 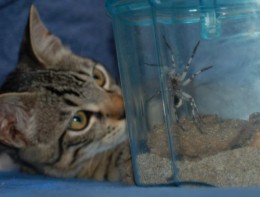 K is a wolf spider, as Emil said. Her Latin name is Lycosa tarentula. Have you noticed her eyes? She has three pairs, set at different angles. She measures about three inches in length, from front foot to back foot. She usually lives in a burrow, or in a hollow which she digs for herself beneath a stone, but Roxanne found this one running around in a supermarket. She promptly scooped it up – to the amusement and horror of the shop girls – and walked home with it in her hand. I won’t tell you what Big Sister said when she found it watching her from a plastic box in their shared cabin… Truco spent an hour stalking the beast and pouncing – fruitlessly, of course – before he finally gave up in disgust.

L is a stick insect. Is that what you meant when you said it was a walking stick, Emil? I guess that must be the American name. We don’t find these creatures in our arid little corner of southern Spain. This one was photographed at a friend’s house in western Andalucía. It was just hanging about in a bush, doing absolutely nothing – until Roxanne picked it up and let it crawl across her face. Oh, yuk!
Please don’t ask me which end is the end that eats, or where it keeps its third pair of legs.

So now you know a little bit more about the world of the arthropods. Our next quiz is going to have a marine theme, with some familiar creatures, some obscure things to puzzle and bemuse you, and some fishes for Greg.